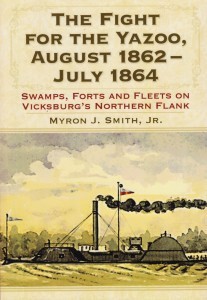 Myron Smith has delivered a wonderfully detailed account of the stubborn fighting that continued along the Yazoo River for much of the Civil War. For the Union Navy, in particular, it was a sometimes brutish brawl that continued after the fall of Vicksburg and the opening of the Mississippi River 150 years ago.

This book lives up to his introduction’s pledge that “our emphasis remains, as much as possible, upon the waters of the delta and the men, North and South, who fought for their control.”

The Civil War in the West is still terra incognita to many Americans who think of the fighting in terms of the Virginia campaigns, the Confederate invasions of Maryland and Pennsylvania, and Sherman’s march to the sea from Atlanta.

I was particularly intrigued by Smith’s accounts of  Brig. Gen. Alfred Ellet’s efforts to snuff out the rebellion in Western Tennessee and Northern Mississippi. While the Union Navy dithered in the opening days of the war as to whether it should commit men, money and ships to the river wars, Ellet, originally a captain the Illinois Volunteer Infantry, he transferred to his brother’s “United States Army Ram Fleet” to join the successful attack upon Memphis.

When his older brother was killed in that assault, Alfred Ellet assumed command of the unit that was eventually re-named the “Mississippi Marine Brigade” reporting directly to Secretary of War Edwin Stanton.

Not only did the brigade operate ships, it brought along horses so its men could act when necessary as cavalry scouts including a futile raid with regular Army forces up the river that left Yazoo City destitute.

On the Confederate side, Smith, library director and a professor at Tusculum College, draws a compelling portrait of Cmdr. Isaac Brown, the innovative de facto naval commander in the West and a protégé of Matthew Fontaine Maury. Brown’s war in the West opened with his mining of roads leading into Columbus to stave off Union soldiers trying to push Leonidas Polk’s forces out of what had been a neutral Kentucky.

From “torpedoes,” as mines were called then, to cottonclads and ironclads, Brown kept up the naval fight until the Union Army overpowered Yazoo City in July 1863. The community’s shipyards and small fleet of civilian steamers were destroyed by the retreating Confederates. Much of its cotton supply fell into the hands of the advancing Union forces. Brown would re-surface in South Carolina as commander or ironclad Charleston in that city’s stubborn defense. In one of his last reports from the West, Brown boasted the Union had lost “their finest ironclad,” DeKalb, to one of his mines.

But the war in the Mississippi Delta had changed with the surrender of Vickburg and the subduing of Yazoo City. As Smith wrote, “The Delta [Union troops] visited was regarded by them as something of a backwater, or if you will, a breadbasket to be harvested, or a territory to be crossed while en route somewhere else.” Nevertheless, the “a few skirmishes and minor-league” battles still were fought in the Yazoo Delta. The spirit of the Confederacy fought on with a few regular troops and more irregulars. The Union Navy also had largely left the area by the fall of 1863. As a result, “the cotton trade resumed and both sides continued business as usual,” and the Union Treasury Department had to hustle to ensure the nation’s most valuable export remained under its control. The department was not always successful. It was tit for tat for more than a year as the war ground on.

Although Robert E. Lee had surrendered what was left of the Army of Northern Virginia April 9 at Appomattox Court House, Confederate forces in Mississippi were still in the field as May began. They were slow to surrender, and many were bitter at the turn of events. July Fourth wasn’t celebrated as a holiday in Vicksburg until 1941.

Old memories die hard. Smith has done a masterful job in telling how those memories came to be made.

John Grady is a veteran journalist and oral history volunteer for the NHF.