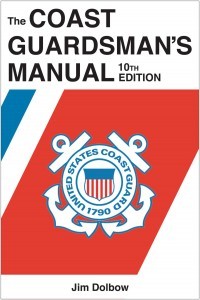 The Coast Guardsman’s Manual, first published in 1952, is now in print for its 10th edition, skillfully edited by Lt. Jim Dolbow (USCGR).

Dolbow has served on active duty assignments, as a congressional legislative assistant on defense issues, and legislative affairs analyst for Admiral Thad Allen, USCG (Ret.). The gifted writer and editor of The Coast Guardsman’s Manual earned advanced degrees from the U.S. Naval War College and Institute of World Politics.

The author’s academic and military experience and writing skills make this manual of instruction and tradition he dedicated to “Team Coast Guard” an extraordinary resource and great read.
Dolbow traced historic and contemporary Coast Guard operations, including joint missions with the U.S. Navy. The USCG has served in all of the nation’s wars, and performs, as the editor magnificently synthesized, the multiple missions of search and rescue, law enforcement, scientific expeditions, environmental protection, drug and immigration interdiction, port and maritime security, aids to navigation, fisheries enforcement, ship inspection and boarding, and national defense missions.

The Coast Guardsman’s Manual is a 612-page book intended to teach USCG members about the heritage, operations, training, and professional opportunities of the fifth military service. The Manual is filled with illustrations and divided into sections that cover history, personal and career development, nautical and military skills, enlisted and officer rates and ranks, protocols, survival and fitness regimens, and mission responsibilities. The Manual cover is graced with the famous Coast Guard “racing stripe.”

The Manual is designed to stimulate professional knowledge, pride and advancement for active duty, regular and reserve, civilian, and Coast Guard Auxiliary members of the Service.

The book chronicles the Coast Guard from its 1790 founding as the U.S. Revenue Marine under Treasury Secretary Alexander Hamilton, Tracing the service from its origins, Dolbow documents the amalgamation of the Revenue Cutter Service and the U.S. Life-Saving Service into the U.S. Coast Guard in 1915; the absorption of predecessor agencies; and the historic transfer of the Service from the Departments of the Treasury and Transportation to the Department of Homeland Security in 2003. Especially impressive is the chronicling of Coast Guard contributions in domestic and foreign conflicts, including of the war with France, Anglo-British War of 1812-1815, Seminole Wars, Mexican-American and Spanish American Wars, World War I, Prohibition, World War II, Korea, Vietnam, and the War on Terror and related Middle East conflicts. Training schools range from recruit training to the U.S. Coast Guard Academy, officer candidate school, and advanced training institutions for petty officers, and warrant and commissioned officers.

Dolbow’s organization of the classic Coast Guard manual illuminates the multi-mission responsibilities of the Service, and the training and skills of the personnel who achieve those missions despite limited budgets, personnel, and stretched and aging air, sea and shore assets in spite of post-“9/11” upgrades and deep water planning.

Dolbow, who credits previous editors and other Coast Guard contributors to the Manual in his acknowledgments, has clearly illustrated how “Team Coast Guard” has remained faithful to its “Always Ready” motto, “Semper Paratus.”

Tom Ostrom has written several books on U.S. Coast Guard history. He is a retired college instructor of anthropology, history, and geography. Ostrom was a Petty Officer in the U.S. Coast Guard Reserve from 1961-1969, and has spoken at the U.S. Navy Memorial in Washington D.C.