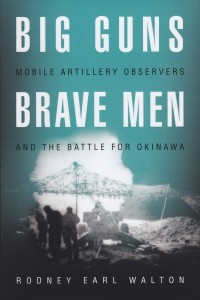 This well-researched and well-written book analyzed the role of forward artillery observers on Okinawa during the largest artillery battle in World War II’s Pacific Theater. Likely inspired by his father’s role as a forward observer for the 361st Field Artillery Battalion, the author has taken the story of the fighting to greater depths by looking at the role of the United States Army on Okinawa unlike other books that focus on the contributions of the Marines.

Before delving into the actions of the forward observers, Walton provided a general look at the history of artillery and the rise of observers by commenting briefly upon the American Civil War, conflicts in Europe, and the First World War. Starting in the 1920s, the Army trained observers at Fort Sill, Oklahoma. During World War II, observers were used in the campaigns at Guadalcanal and North Africa with success, but were not used in large numbers until the battle at Leyte in the Philippines. Many of the observers came from the fighting in the Philippines to Okinawa bringing their expertise with them. The battle for Okinawa anticipated the invasion of the Japanese home islands. With that in mind, the observers realized that their role in the interior of the island could mean victory or defeat for the American forces.

Relying on binoculars, maps, and radios, and often led by artillery lieutenants, forward observers proved to be vital to the victory on the largest of the Ryukyu Islands. The men who served in this role were generally mid-level, middle-class officers with little or no combat experience. They had the ability to mix well with men in the infantry who fought on the front lines where the forward observers had hidden themselves, as well as got along well with the artillery units behind the lines. Their relationship with lower ranks lacked the military formality in other non-observer units. The officers often removed their rank insignia to prevent the Japanese from being able to identify them. The observers called in strikes on radios that weighed approximately fifty pounds and with the other equipment the men carried to the front lines, they were often hauling nearly ninety pounds of equipment and supplies. Generally, they served three days at the front before returning to the rear for rest and resupply.

The geography of Okinawa proved to be challenging for the artillery units because of the vast number of high ridges. The Japanese positioned themselves on the side of the mountains or in tunnels and caves that faced away from the on-coming Americans. Because of this, artillery rounds could not be pinpointed precisely. Despite the difficulties, the observers’ contributions brought down artillery fire on the Japanese that allowed the Americans to win after nearly three months of severe fighting. Needless to say, the observers became prime targets for the Japanese forces.

By the end of the campaign, the cannons that American units used experienced more frequent “short rounds,” shells that fell short of their intended targets. Sometimes these occurred because of equipment failures, such as worn out gun tubes. At other times, miscalculations of the target’s coordinates caused friendly fire. Occasionally, the inability to see the enemy caused difficulties. Despite the problems the observers’ success rates far exceeded the errors.

The author noted that the Japanese forces did not use forward observers and that they did not focus a large number of cannon on any one location at one time. Captured Japanese soldiers told their interrogators that the American artillery was successful against the Imperial Army. Regarding the Japanese, the author found that they were inexperienced in middle-management positions. That was likely because the Japanese were still new to the world of manufacture and to a new military structure that differed greatly from their centuries’ long shogun-daimyo-samurai system.

Big Guns, Brave Men provided a new, more intimate, look at the largest conflict in the Pacific theater. Along with an excellent narrative, Walton provided maps, charts, and photos of the observers. There is also an appendix with a few combat stories that did not fit into his book; however, they provided some amusing tales of the men in the field. On a minor note, did the soldiers ever encounter the venomous snakes of Okinawa as they hid themselves in the jungle? Also, what happened to all the shell casings? The book provided a wonderful look at a side of the battle for Okinawa not analyzed before making it a worthy addition to any bookshelf.

Dr. Ahmad, who teaches at the Missouri University of Science and Technology, spent nine weeks teaching in Okinawa earlier in her life.