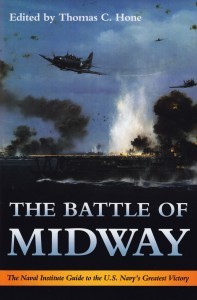 No other naval battle in recent American history has garnered more attention than the aircraft carrier clash at the western extremity of the Hawaiian Island Chain in June 1942 than Midway. Ever since Samuel Eliot Morison’s seminal volume in his multi-volume history came out over sixty years ago, the battle has drawn naval historians to it like flowers draw bees. Midway in some sense was the “Moscow 1941” of the Pacific War, a truly decisive moment in the war. Unlike Moscow, the sheer scale of the victory transferred the strategic initiative permanently to the United States for the remainder of the conflict in the Pacific. Like all important human events the battle has constantly been re-examined, most recently by historians Jon Parshall and Tony Tully (Shattered Sword, 2005), John Lundstrom (Black Shoe Carrier Admiral, 2006), and Craig Symonds (The Battle of Midway, 2011).

Enter the Naval Institute Press (NIP), which published two of the three titles mentioned above. It has published several of edited anthologies recently. Thomas C. Hone’s collection here for the battle of Midway is one such effort. They are to be congratulated for having Hone scour the archives to bring us the collection. Hone is himself a widely published historian who specializes in the Pacific War during World War II as well as aircraft carrier operations and design, having co-authored two seminal books on aircraft carrier development in the 20th century.

The structure of the book makes it an excellent reader for even those casually interested in Midway. Its eight sections have something for everybody and flows chronologically from the context-setting “Midway Anthology” (3), through the approach and battle phases, to the later sections on strategy and the commanders. Also included is a useful section that includes the official battle reports. The entire effort is closed out by a Section VIII that offers various assessments of the battle by the stellar group of scholars and professional officers and is kicked off by none other than Admiral Raymond Spruance (283) published first in Proceedings in 1955.

There is nothing new here other than Hone’s judgments and choices on who to include and the sequence. However, Hone’s choices and the structure of the book make it a jewel. He was limited in some sense to works published by NIP, but so much of that scholarship, both in book form and in the Naval Institute’s magazines, is recent that the anthology reads like new scholarship. Especially noteworthy in the book is the inclusion of the excellent revisionist work (some mentioned above) on the battle by John Lundstrom, Geoffrey Till, Mark Peattie, and Craig Symonds as well as new scholarship on the code-breaking aspects by Elliot Carlson (269). Hone especially highlights the work of Lundstrom. Readers who think they know the Midway story will find new faces and angles. Especially worthwhile is the attention given to the low-key commander who had been lost to history—Frank Jack Fletcher. It is odd that Fletcher, the man who orchestrated two of our nation’s greatest naval victories (Coral Sea and Midway) has been all but forgotten. Some of the credit that was rightfully his was distributed to other (certainly worthy) individuals such as Spruance, but here Hone, via Lundstrom, sets the record straight (252-254).

Hone has also included a number of excellent Proceedings and Naval History articles, all well-chosen to add to the value of the collection. Among these are excellent primary-source or “eyewitness” accounts by principals like Mitsuo Fuchida, Raymond Spruance, Yahachi Tanabe (who sank Yorktown), and especially Jimmy Thach’s article on his development of the most famous fighter tactic of all time, the “Thach Weave,” which made its debut at Midway. Hone also includes excellent primary source orders and assessments in the work, both in the body and in several excellent appendices.

I only had one quibble about the collection. Why did Hone not use Jon Parshall’s excellent “after Midway” article from Naval History (2007) several years ago?  Maybe ran out of space, but Parshall is among the reigning experts on the Japanese side of Midway, revising many of Fuchida’s myths, and it would have been nice to see more of his work in this excellent collection. Notwithstanding this minor complaint, this is an excellent collection and those interested in naval history as well as professional officers of all stripes would be well-advised to have it in their collection. Bravo Zulu to Tom Hone, the authors, and the folks at the United States Naval Institute for bringing us this valuable collection.

CDR John T. Kuehn, USN (retired), is the General William A. Stofft Professor of Military History at the U.S. Army Command and General Staff College. He is the author of Agents of Innovation (2008), co-author of Eyewitness Pacific Theater (2008), and the winner of a 2011 Moncado Prize from the Society of Military History.