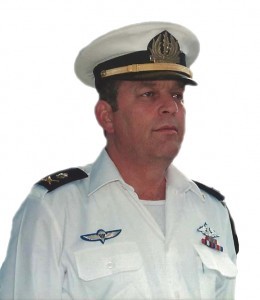 (Editor’s note: This is the fifteenth in a series of blogs by Norman Polmar, author, analyst, and consultant specializing in the naval, aviation, and intelligence fields. Follow the full series here.)

During my professional career I have consulted to three foreign navies—Australian, Chinese, and Israeli—as well as to several foreign commercial firms. I met and worked with interesting people in all of these countries and have maintained friendships with several of them.

Among them is Micha (Michael) Ram, retired vice admiral and former Commander-in-Chief of the Israeli Navy. I first met Ram in 1980 when he was a student at the Naval War College in Newport, Rhode Island. Our friendship began at a Washington reception when he was introduced to me as a “comer” in the Israeli Navy.

A graduate of Israel’s nautical college—a high school-level institution—in 1960, he went on to the Navy cadet course. After advanced training, Ram commanded a torpedo boat. He was then sent to Cherbourg, France, for 12 months in 1966-1967 for the construction of one of the dozen Sa’ar-type missile boats being built for Israel. He sailed in one of seven of the boats that transited to Israel in 1967.

He returned to France for the completion of another boat, but he returned home after four months “because I had a beautiful young wife and a baby daughter waiting.” Meanwhile the French government impounded the five other boats following the 1967 Arab-Israeli conflict as well as French-built aircraft purchased by Israel in order not to antagonize the oil-producing Arab states. Israel had already paid for the missile boats and the 50 fighter aircraft. The French actions—detailed in journalist  Abraham Rabinovich’s book The Boats of Cherbourg (1988)—ended France’s military support of Israel, a role that was then taken over by the United States.

Subsequently, Ram commanded the French-built Sa’ar missile boat Eilat, and then the first missile boat built in an Israeli shipyard, the Reshef of the Sa’ar 4 design. He was in command of the Reshef during the October 1973 conflict with Egypt and Syria—the Yom Kippur War. Ram was in action against both Arab navies, and he fired the first Israeli-produced Gabriel missiles launched in the conflict, sinking a large Syrian minesweeper. Following additional engagements with the Syrian Navy, the Reshef  was sent south, to the Egyptian theater, where Ram again scored with Gabriel missiles.

During the 1973 conflict, Israeli missile boats sank 13 Egyptian and Syrian Komar and Osa missile craft, provided by the Soviet Union, as well as the Syrian minesweeper—all sunk by Gabriel missiles. Although some 50 Styx missiles (with greater range and payload than the Gabriel) were launched against the Israeli missile craft, the only damage suffered by the Israelis was a piece of shrapnel that struck one missile boat.

Attending the U.S. Naval War College in 1980, Ram found Arab officers among his classmates. An Egyptian officer and Ram discussed the 1973 conflict and they discovered that Ram’s Reshef  had sunk the Egyptian commander’s Soviet-built Osa missile craft. “And, we got along very well during the course,” recalled Ram.

And, there was a strange, almost comical occurrence at Newport: When Ram’s class toured U.S. naval bases, Kosher meals were served on all of the commercial air flights. Several U.S. naval officers cornered Ram to ask who he thought he was to place such meal orders. Ram countered that they all knew he did not keep Kosher and certainly would not have asked for Kosher meals for the class. It was ascertained that the Saudi Arabian officer had placed the order, wanting to insure that no pork was served!

During that period, Rear Admiral Zeev Almong, the CinC of the Israeli Navy, asked me to undertake an analysis of the potential role of hydrofoil missile craft for the navy. The Israelis recently had procured a Grumman-built hydrofoil of the U.S. Flagstaff (PGH 1) design for evaluation. After looking at conventional and hydrofoil small combatant configurations and capabilities, and Israeli naval missions, my conclusion was that the additional speed provided by hydrofoils over conventional high-speed craft was not worth the cost because of the availability of maritime patrol aircraft, ship-based helicopters, and unmanned aerial vehicles that could support specific Israeli naval missions. The Israeli Navy procured no additional hydrofoils.

Although my study was not related to intelligence matters, because I knew Ram, he looked after me during my visits to Israel. We became close friends and I got to know his charming wife, Chaya, and their three children.

Following his 1980-1983 assignment as head of naval intelligence, Ram served as the Israeli naval attaché in Washington from 1983 to 1985. There we continued our relationships, both social and professional.

Returning to Israel, Ram became the vice chief of the Israeli Navy and in 1989 was named CinC. While in these positions he frequently visited Washington. Periodically I would receive a phone call along the lines of: “Norman… Micha here. I will be in Washington next Tuesday for four days. Please arrange a dinner the following evening at Peking Gourmet Inn for nine persons.”  Thus, my wife, Beverly, and I would see Ram and meet his U.S. naval colleagues while enjoying excellent Peking Duck at the restaurant in Falls Church, Virginia.

Ram’s dynamic personality helped to build a very strong relationship with the U.S. Navy during this period. “There was cooperation between the navies in areas where they had not previously worked together,” said one U.S. flag officer when asked about Ram’s impact while CinC.

Ram retired from active duty in 1992. We have kept in contact and meet on my visits to Israel. During my wife’s and my visit in November 2007 the Rams drove us on a couple of day-long tours around the country (which is the size of the state of New Jersey). The time with the Rams was always stimulating, educational, and enjoyable.

We keep in contact and look forward to meeting again—in Israel and in the United States.