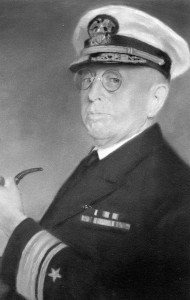 Tapes from the History of Early Radio recording project that was conducted by Rear Admiral Edwin Hooper have been transcribed by Naval Historical Foundation retired Yeoman Chief Frank Arre. Dr. Jonathan Winkler of Wright State University (no relation to the NHF’s Dr. David Winkler) is editing the transcripts for eventual publication. The reel-to-reel tapes spent over a half century in storage at the Library of Congress Sound Recording Division. The Hooper recordings were originally made in the 1950s during Rear Admiral Hooper’s retirement years. He recorded his own reminiscences as well as those of others who had been influential or involved in the development of not just radio but all forms of electronics for the U.S. Navy in the period from the beginning of the century through the early 1950s. His collection of papers, which included the tapes, were donated to NHF and in the 1960s were placed in the Library of Congress. At some point, possibly in the 1960s, a transcription was made of some of the Hooper recordings, in large part because the originals were deteriorating and flammable. Only 95 of the 153 recordings were transcribed. The remaining 58 recordings were not transcribed.

After discussion with naval historians Randy Papadopolous (Historian for the Secretary of the Navy) and Tim Wolters (a professor at Iowa State), Dr. Winkler teamed the NHF and the Institute of Electronics and Electronics Engineers History Center to complete the transcriptions. The information in these transcripts will enhance our understanding of interwar research by the U.S. Navy into communications-electronics, the development of the electronics industry in the United States, and the transformation of the U.S. Navy in the interwar period as it integrated electronics into all aspects of naval warfare.

The 58 recordings span a wide range of individuals, from the technical experts working to develop radio and related technologies to the officers and enlisted personnel who learned how to integrate into the fleet the advantages that electronics conferred. It includes an interview with Guglielmo Marconi’s daughter, and a Medal of Honor recipient who, recalled to active duty as admiral on the eve of World War II, found himself caught up in the intense politics of anticommunism and radio policy.

The transcripts are being edited by Dr. Winkler with a goal of online publication in 2014.