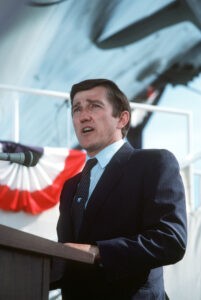 (Editor’s note: This is the thirteenth in a series of blogs by Norman Polmar, author, analyst, and consultant specializing in the naval, aviation, and intelligence fields. Follow the full series here.)

John Lehman had an almost revolutionary impact on the Navy. He walked into the Pentagon in 1981 knowing what he wanted to do for the Navy and how to accomplish those goals. He wanted to build the fleet to 600 ships (at the time the Navy had some 530 ships and was declining), and to further develop and implement the Maritime Strategy. That operational concept had begun under Admiral Thomas B. Hayward, the Chief of Naval Operations from 1978 to 1982, and was based in large part upon highly classified intelligence available at the time of Soviet plans and capabilities.

At age 38, Lehman was one of the youngest men to become Secretary of the Navy. With a PhD from the University of Pennsylvania, he previously had worked for Henry Kissinger as special counsel and senior staff member on the National Security Council and had served as deputy of the Arms Control and Disarmament  Agency. He was a Naval Reserve officer and during the Vietnam War had flown several combat missions from the carrier Saratoga (CV 60) over South Vietnam and one over the North as a bombardier-navigator in an A-6 Intruder attack aircraft.

Lehman used his contacts in the Reagan administration and Congress to garner support for his programs. For the first time since World War II he was able to obtain funding for two super carriers in a single year—and he did it twice; he provided the Naval Reserve with first-line aircraft and ships for the first time since the Korean War; and he approved Marine Corps procurement of both the F/A-18 Hornet and AV-8B Harrier aircraft after the previous, Carter administration had decided only one could be bought. The list of his accomplishments continued, and the list was long and significant.

In 1981 he appointed me to the Naval Research Advisory Committee (NRAC), his principal advisory body (see the following blog). Lehman gave me several assignments beyond my NRAC activities, which included my chairing a major NRAC panel examining future Navy-Marine Corps training space requirements. Among my assignments from Lehman were directing a study of how to integrate the Maritime Strategy into various Navy schools and training programs, from recruit school to the chaplain’s school to the Naval War College. Also, he asked me to participate in the Navy’s analysis of the British-Argentine conflict over the Falklands in 1982. The latter effort, in which I was the only non-Pentagon participant, included my writing Lehman’s report to Congress, published as “Lessons of the Falklands” (February 1983).

Lehman’s influence in garnering support for the Navy was demonstrated at a National Security Council (NSC) meeting in 1983. Dr. Dov Zakheim, then assistant to Under Secretary of Defense Fred Ikle, sitting in back of the White House cabinet room, observed national security advisor Robert McFarlane and his deputy William P. Clark in whispered conversation with President Reagan. Suddenly, Zakheim recalls, Reagan turned to those around the table and said something along the lines of: “I understand that there are people who oppose the 15-carrier, 600-ship Navy. Does anyone here oppose it?” No one answered. The program was approved.

Some of Lehman’s actions when undertaken were not universally applauded by the Navy admirals and Marine generals… although in public they certainly greeted most with praise or at least silence. Once Lehman departed the Pentagon the criticism of many of those initiatives came fast and loud.

Lehman stepped down as Secretary of the Navy in April 1987, the third-longest serving secretary in Navy history.  Almost immediately the “Lehman bashers” surfaced. These were naval officers and civilians who had served with him, who now attacked him—often in print—for his successes as well as his failures. Several of Lehman’s critics helped journalist Greg Vistica write a scathing attack on Lehman entitled Fall from Glory: The Men Who Sank the U.S. Navy (1995), produced by a major New York publisher. The book seeks to blame Lehman and his “cronies” for creating the situations that led to every problem of his time in office and beyond, even the turret explosion on the battleship Iowa (BB 61) in 1989 as well as the Tailhook convention scandal  in 1991. Vistica’s most poignant description of Lehman is found in his caption for a photo: “Secretary of the Navy John Lehman, a Ronald Reagan appointee in 1981. A macho, hard-drinking party man enamored of naval aviation, Lehman was also a tenacious and skilled political infighter who orchestrated the largest peacetime naval buildup in the nation’s history.”

Most naval officers and informed civilians who have read the book and discussed it with me hold extremely poor opinions of Vistica’s effort to condemn Lehman. In many (most?) cases he simply got the facts wrong or misunderstood what was happening. The book also suffers from numerous factual errors.

As I would later write in the Naval Institute Proceedings (August 1987), “John Lehman is egotistical, a sore loser, and a lousy winner. He takes care of his friends. He hurts his enemies. If you cross him you are in trouble.”

But the real Lehman bashers failed to recognize Lehman’s considerable accomplishments for the Navy and for the nation. The accomplishments, which the Navy admirals and Marine generals applauded, and which left the other service chiefs yelling “foul,” were quickly forgotten by the Lehman bashers. Also forgotten were his truly lasting impacts on the Navy: He abolished the personification of bureaucracy, the Naval Material Command; he had a key role in the firing of Admiral H.G. Rickover, who had become the rock of resistance in the channel of progress; and he embraced competitive procurement with the resulting reductions in weapons costs.

[The continuation–Part 2–of Norman Polmar’s blog “Working for John Lehman” will be posted shortly.]