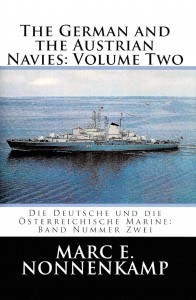 My immediate interest in these two volume stems from the presence in my manuscript of three Imperial German Navy ships: S.M.S. Olga, Adler, and Eber. Longer term I anticipated that Marc Nonnenkamp’s research would under girt future writing leading up to the Great War.

Indeed, The German and the Austrian Navies: Vol. I and II provide unmatched historical breadth covering 1,936 named ships from the German, West German, East German, Austrian … Holy Roman and Hanseatic League navies. Equally impressive is the comprehensive, if not exhaustive, coverage of ship classes as illustrated by the title of Chapter 14 “The Smallest Sailing Vessels of the Austro-Venetian Navy (less than 80 tons displacement).” Not only does the author include ships that sailed under one or another Germanic flags but he includes ships planned but never built. I had a vague knowledge of an Nazi aircraft carrier left unfinished in 1945, but Nonnenkamp points out that “9 planned German aircraft carriers already had proposed names – 7 of which were already launched.”

Another obscure category of warship probably not well documented elsewhere are those ships captured by the Germans and placed into service with their navy. Mr. Nonnenkamp has done his homework here as well. Typical information on a ship class includes the name of each ship, key dates, name sources, armament, complement, and final disposition. As the ship’s size and historical impact increases so does the associated history of each ship. But few ships receive more than a plump paragraph.

Collected at the end of volume II are essays on a range of related topics such as “Operation Sealion”, “Mediterranean Strategy of the Kriegsmarine”, “Fatherland and Monarchy”, and Modern Nautical Museums in Germany and Austria.” The appendix includes suggested books and web sites. The annotated sources include books on the pending financial collapse, Nostradamus, and freemasons, which suggests more proofreading might be beneficial.

Ah, but here is the rub. No index follows the appendix. For a title that will be mainly used as a research tool, the absence of an index is baffling. Furthermore the overall organization of the volumes seems inconsistent, causing the reader to miss the index all the more. Also disappointing is the relative lack of photos (Conway’s and Janes comes to mind). However a small collection of working sailor photos from the Nonnenkamp family archives is a treasure. Several paintings by the noted marine artist Gunther Todt (available in color on the family website www.theborromeofamily.com) are a treat as well.

During the spot-checking of the two volumes, a few mistakes were found: the wrong Jean Bart is referred to on page 235 and the U.S. moon landing occurred in 1969 not 1968. Recalling my immediate interest above, the Adler (vol. I, pg. 137) as described as having three times the displacement than Adler in Conway’s or on the official U.S. naval history web site. Another error perhaps — a second Adler (vol. II, pg. 34) fits Conway’s description.

In summary these volumes are a remarkable compendium or catalogue of the warships of the German speaking peoples. While the occasional error is mildly distracting; the absence of an index, at least of ship’s names, hampers the research for which the volumes were intended. Nevertheless, this reader will benefit from them for years to come.

Winn Price is working on a historic novel based on the events surrounding the cyclone that disrupted the delicate diplomatic situation in Samoa in 1889. He aspires to follow a naval cadet’s career in future books.