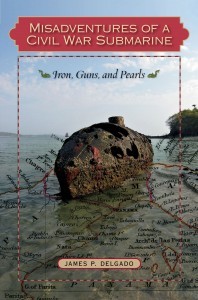 When I saw the title of James P. Delgado’s most recent book, I mistakenly believed it would chronicle the storied life of the CSS Hunley simply because this was the only Civil War submarine with which I was familiar. Intrigued? So was I as soon as I saw the cover jacket adorned with a submersible that I did not recognize. The book, Misadventures of a Civil War Submarine: Iron, Guns, and Pearls, is Delgado’s latest journey into maritime archaeology. Delgado, currently the Director of the National Atmospheric Administration’s Maritime Heritage Program, has written more than one hundred articles and over thirty books on topics of maritime archeology so this book bears the touch of a seasoned story teller.

The book begins as a mystery. While on vacation, Delgado spied a hulk of a submersible beached at Isla San Telmo off the coast of Panama. As he investigated the hulk, he heard several stories, including that it was an abandoned Japanese miniature submarine from World War II sent to attack the Panama Canal. When Delgado went to survey the wreck, however, he knew it had to be much older. After inquiring with a few experts, he determined that the vessel was the Submarine Explorer, designed by the German immigrant Julius Kroehl and built for the Pacific Pearl Company. It was shipped to Panama in pieces and assembled there as a business venture to secure pearls and oyster shell in commercial quantities. Delgado’s aim with this book is to explain how the Submarine Explorer got there. He does so by telling the stories of the people who designed, financed, and built the vessel.

Delgado constructs the story of the vessel’s designer, Kroehl, using a variety of science journal and newspaper articles, naval reports, census records, awarded contracts, personal correspondence, and journal entries from the period. Despite the thorough research, there are some gaps in the story where Delgado has made some reasonable conjectures to produce convincing explanations. The chronological and engaging narrative flows smoothly and also provides the reader an education on the history of diving, diving bells, and competing submersible designs. An area of particular interest to Civil War historians and history buffs is the role engineers such as Julius Kroehl played in Union campaigns by clearing river obstacles set by the Confederates to prevent Union vessels from traveling up rivers. I am not aware of any other works that describe this neglected aspect of the Civil War.

Another area where Delgado excels is in his discussion of the business practices used by the Pacific Pearl Company. Apparently, the financiers researched the technology required for their venture thoroughly but neglected to inform themselves about the actual pearl fishery, and local knowledge of areas previously depleted by the natives employed in pearl diving. The venture had only met with marginal success when Kroehl died prematurely exhibiting symptoms attributed to malaria. Possible explanations for the business failure are an arrogant faith in the ability of technology to overcome nature, and racial prejudice that blinded the businessmen to the fact that the locals had intimate knowledge useful to them. The irony is that because of the technology involved, few had the skills necessary to operate the submersible. When Kroehl died, the business remained idle for over a year until another operator could be hired. Moreover, Delgado points out that Kroehl’s symptoms were also consistent with decompression sickness, possibly acquired by collecting the oysters at deep depth using the Submarine Explorer. At the time, almost nothing was known about diving physiology. Talk about the prospects for preservation

To conclude the book, Delgado includes a frank discussion of the prospects of preserving the Submarine Explorer. The author has included useful pictures showing the submarine’s current condition and innovative design. Appendices show detailed drawing of Submarine Explorer, the Navy’s detailed report on the vessel, and the personal effects of the deceased Julius Kroehl. One nit-pick, Misadventures of a Civil War Submarine might be more accurately titled as a history of a civil war era submarine. The book’s subject, the Submarine Explorer was not a participant in the U.S. Civil War. The submersible’s construction began during 1864 as a private venture. Its designer, Kroehl hoped that it would be taken up by the U.S. Navy. The Navy Department showed interest, giving the design a favorable report, but the war ended prior to the vessel’s completion and the navy passed on the project. Nevertheless, this book is a significant contribution to Civil War history, submarine history, and maritime history. Anyone with interest in these areas will find the book a rewarding read.

Dr. Pattee, a retired U.S. Navy submarine officer, is a member of the faculty at the U.S. Army Command and General Staff College.