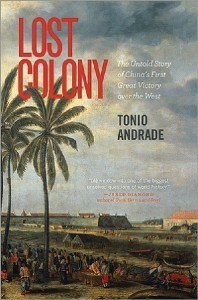 The Chinese naval and land military defeats versus all foreign powers, including Japan, Russia, Britain and France from 1886 to 1947, are well known. What is not well known is the Chinese defeat of Dutch forces over Taiwan in 1660. This is the second book by Associate Professor of History Tonio Andrade of Emory University on this conflict. In his first book, “How Taiwan Became Chinese” (2008), Professor Andrade held the popular position that Europe conquered other continents instead of China, who developed earlier, because of European superior weapons and tactics. His further research on Chinese military evolution caused him to reverse his position in this second book on the 1660 Taiwan conflict with the Dutch.

The 24 illustrations include many excellent drawings of that period, of which 15 are maps with details of geography that are different from modern maps to transport you back to the Taiwan and Asia of that time. Other sections of the book, external to the chapter text, add much value to the story. The 62 pages of notes and 22 page epilogue and conclusions add vast details that enhance the book with historical texture. The extent of foreign source references in German, Chinese and other languages reflect the tremendous research that supports the author’s change to revisionist military theory.

Major and even minor characters are brought to life through capturing their personalities, motives and interactions. They are not just names in a history book. The Chinese military leader who defeated the Dutch on land and sea at Taiwan, Koxinga, is not introduced until after the reader learns of his powerful father, Zheng Zhilong. In 1633 at Liaoluo Bay, Zheng’s naval vessels defeated nine Dutch warships with warjunks that were used as fireboats. Zheng’s unorthodox strategy of using these larger armed warships in this role, instead of the usual smaller water craft surprised the overconfident Dutch. Five surviving Dutch vessels fled to Taiwan. Subsequently, the son, Koxinga tried to restore the Ming empire that had been defeated by the Manchu emperor. Following initial successes and defeats including loss of his capital of Nanjing to the Qing forces, he diverted his powerful army and naval forces to capture Taiwan from the Dutch in 1661.

The book includes some subjects that are very polarizing in discussions among military historical experts. Notably, is whether the European military world-wide colonization is really based upon military superiority over Asiatic, specifically Chinese, forces or not? The superiority is broken down into armament technology, strategy, discipline and tactical areas. The two schools of thought are termed “traditionalist” and “revisionist”. The Dutch ships with their complex “spider web” of sails and lines could sail into strong winds, which was impossible for the Chinese with their junks. A critical naval battle occurred in 1661 in Taiwan Harbor between five heavily armed Dutch warships against dozens of Koxinga’s junk warships. The large Dutch flagship Koukercken was sunk. Another Dutch warship grounded and a third was abandoned. Two vessels escaped. Dutch losses included 131 sailors killed or captured. Cannon technology was about equal and surprisingly, Koxinga’s sword and bow armed troops caused Dutch musketeers to break ranks and flee the battlefield in Taiwan harbor.

Potential readers of this book should not be limited to those interested in Chinese history because the subject matter encompasses the range of parallel European versus Chinese civilizations. The recent expansion of the Chinese navy beyond home waters to other continents makes Professor Andrade’s unique insight timely.

Jim Bussert co-authored a book with Prof. Bruce Ellemen on Chinese Naval Combat Systems and has published over 200 articles in military journals.