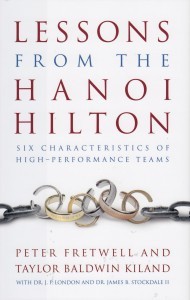 Never before have I had the privilege to read a book that within only 153 pages of text provides the reader with an outline of how to be a leader. I need to mention that there is also a 25 page introduction that sets the stage of how and why the book came to be written. In addition, this section lays out a timeline of the events that led to the incarceration and release of these United States Navy, Air Force, and Marine pilots.

This book tells the story of now to successfully manage an organization and insure that it continues to be successful when the next leader takes the helm. The case studies presented in this book, however, do not center on a business increasing its profit margin or a team winning the big game, instead we are taken inside a North Vietnam prison camp that held American officers. This was a prison camp where the prisoners were not only confined, but where physical and mental torture was inflicted upon those held. This is the story of how these men organized themselves to maintain their morale and provide aid and comfort to each other. The author, in reporting this story, contends that the principles by which these prisoners organized themselves to overcome the adversity they faced are the same principles that govern any successful organization.

The story centers around Commander James Bond Stockdale, USN, who on 9 September 1965, while flying an A-4 Skyhawk, was shot down south of Hanoi. Stockdale and his fellow prisoners faced the dilemma of adhering to The Code of Conduct adopted in 1955 by the Department of Defense. This Code limited the information one could tell his captors. The North Vietnamese, however, used extreme physical and psychological torture to gain information they sought. Cdr. Stockdale, in response, implemented a  modified Code of Conduct to limit the prisoner’s physical and psychological torture.

The working parameters that Cdr. Stockdale established for himself and his fellow prisoners were as follows. As the leader, he established three principles to govern his actions as senior officer. 1)  Provide a Virtual Leadership; 2) Formulate a Viral Culture; and 3) Sustain it with an active Social Network. These three principles were supported by the establishment of six performance standards: The Mission Leads; You Are Your Brother’s Keeper; Think Big and Basically; Don’t Piss Off the Turnkey; Keep the Faith; and The Power of We. The prisoners, by adhering to these principles and performance standards, were able to form a community that worked together for the common good of all.

Each of the three principles and six performance standards are discussed in detail. We are treated to a series of case studies based upon incidents that the prisoners encountered. These case studies illuminate the Who, How, When, Where, and Why concerning the foundation of the principles and performance standards. The case studies are the heart and soul of the book and cause the reader to ask of himself, “How would I have responded if placed in a similar situation?” The case studies, however, are more than a look at surviving as prisoners of war. They also contain information on how any organization can improve itself and become a leader in its field.

This book should appeal to those interested in military history, management of an organization, mental health, and religion. During my read of the individual case studies, I experienced the full gauntlet of human emotions from exuberance to depression. As I closed the book and pondered the case studies presented by the authors that famous line from the movie The Bridge of Toko-Ri flashed in front of me. “Where do we get such men?” This book tries to answer that question.