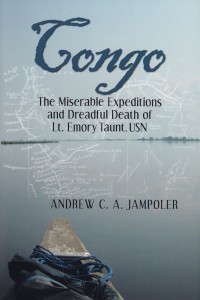 The nineteenth century United States Navy exploration efforts included the Exploring Expedition of 1838–1842 that circumnavigated the globe and discovered parts of Antarctica and the 1848-49 hydrographic expedition charting the Dead Sea. Both were notable successes.

On the other end of the spectrum was Lieutenant Emory Taunt’s exploration of the Congo River in 1885. It forms the centerpiece for Congo: The Miserable Expeditions and Dreadful Death of Lt. Emory Taunt, USN, a new history by Andrew C. A. Jampoler.

Jampoler documents the three journeys to the Congo Taunt made during his lifetime, and puts Taunt’s experiences into a historical context.

Taunt’s explorations were trivial historical footnotes. His first, sponsored by the United States Navy involved a solitary trip up the Congo River to Boyoma Falls (then called Stanley Falls) to assess commercial possibilities in the Congo Basin. His second, as chief of the Sanford Exploring Expedition, used exploration to disguise the Sanford Exploring Expedition’s real objective: economic exploitation. Both were based on flawed assumptions and achieved nothing of value.

His expeditions mirrored Taunt’s life. Jampoler’s portrait of Taunt reveals a mediocre officer with personal failings that short-circuited his naval career. Taunt advancement to lieutenant (and the opportunity to explore the Congo in 1885) was due to his father-in-law, an admiral.

Taunt became hypnotized by the Congo, or rather the apparent opportunity it offered for quick wealth. Even after the Sanford Exploring Expedition’s failure Taunt further seeking riches, returned a third time, as Commercial Agent for the United States Government. Instead, he found a miserable death by disease.

Despite its title, Congo is not really a maritime story. Congo owes less to Sea of Glory or Bitter Water than to King Leopold’s Ghost. Taunt’s life is the springboard Jampoler uses to tell the story of the Congo Free State and its interaction with Europe and particularly the United States.

Taunt proves an excellent launching point for a fascinating story, however, Jampoler reveals the methods King Leopold II of Belgium used to carve out a fiefdom in Africa.

Nominally independent, the Congo Free State became a personal possession of this monarch. Jampoler shows how Leopold treated its people a chattel, while pretending his efforts extracting its wealth a humanitarian effort to benefit those he was oppressing.

Jampoler’s description of how Leopold fooled other nations (including the United States) into supporting him and Leopold’s successful decades-long public relations efforts to conceal the brutality with which the Congo was run is fascinating. So too, are the dramatis personae. Henry Morton Stanley, Theodore Roosevelt, Mark Twain, Joseph Conrad, and Arthur Conan Doyle all make appearances.

Jampoler strikes out in fresh directions from Adam Hochschild’s narrative in King Leopold’s Ghost, focusing more on the American players, especially on American commercial efforts. Overall, Hochschild edges out Jampoler on describing Leopold’s colony, but Jampoler produced a creditable book. Jampoler has independent research, and covers the topic with a North American slant. I do not think two books on the same subject in fifteen years over-saturations a topic.

Jampoler caps Congo with his own voyage down the river. He retraces Taunt’s return route, describing the changes that have occurred and similarities that remain since 1885.

Congo reads like a horror story, mesmerizing yet appalling. Well-illustrated, written in an engaging manner, it is excellent, well-researched history.