The annual National History Day (NHD) concluded with the national awards ceremony on 13 June at the University of Maryland. Every year, the NHD contest invites historically minded students in all fifty states, the territories, and even internationally, to research a topic of interest to them and present their work in a contest that goes from the local to the national level. The theme that the students’ work must relate to changes every year, and this year’s theme was ‘Turning Points in History.’ Small wonder that the 2013 contest has seen a great focus on naval history, with a hundred and thirty national level entries and over twenty finalist and other award winners working in topics directly relating to naval and maritime history.

The National History Day Contest is divided into two divisions, with five categories in each one. Junior Division contains 6th, 7th, and 8th grade students, while Senior Divison includes 9th, 10th, 11th, and 12th grade students. Each division includes awards for individual and group documentaries, exhibits, performances, and websites, along with traditionally written papers. In addition to the main contest, two outstanding entries are recognized per state, and special awards are given out for achievement in specific areas of history, such as the Naval Historical Foundation’s own Captain Ken Coskey Naval History Prize, along with prizes in topics such as Constitutional, Irish, and Labor history. The following tables illustrate the breakdown of entries on naval history:

Military history in general and naval history in particular has been the scene of some of the great turning points in history. From the Battle of Salamis in the era of the Greek city states, to Lepanto in the 16th century, Trafalgar in the 19th, and the modern battles of the Tsushima Straits and Midway, navies and naval conflicts have been the site of several turning points in world history, and this year’s NHD Contest has reflected that importance beautifully in the number and quality of naval history submissions. Nearly 8% of the total submissions in the national contest were related to naval and maritime history, and given the wide variety of topics available, the showing is impressive.The strong showing in naval history amongst students is representative of a powerful interest in the subject amongst students that should be fostered both now and in the future, which the Naval Historical Foundation has done by awarding the Captain Ken Coskey Naval History Prize and sponsoring other students in the contest. As Dr. Charles C. Chadbourn, a member of the Naval War College faculty (as well as a life member of the Foundation) and a long-time NHD judge says, “There’s a kind of camaraderie that comes from being at sea that’s international…It’s important to let the next generation of naval historians know about the long maritime history of the United States in war and peace, and National History Day gives us an invigorating way to share that knowledge.”

We’d like to take time here to recognize two young historians who participated in the contest this year, and presented outstanding work in naval history. Maria Sutton of the Padua Academy in Wilmington, Delaware was awarded the Captain Ken Coskey Naval History Prize for her work on the USS Maine and the significance that her destruction in Havanna Harbor might have had for the creation of the American colonial empire in the latter days of the 19th and early days of the 20th century. Maria casts a broad net, bringing in the greater context of the USS Maine, such as the questions regarding the future of American expansion, the theories of Alfred Thayer Mahan, and the influence of ‘yellow journalism’ and mass media on the American public psyche. The wider context of events shown by Maria helps to place the explosion of the USS Maine in its proper place, and emphasizes how key the explosion was to the new orientation of the United States. Maria goes on to discuss the wider historiography of the Maine, including the many investigations that occured in more recent times that changed the accepted truth of the sinking of the Maine from ‘Spanish attack’ to ‘accidental explosion.’ 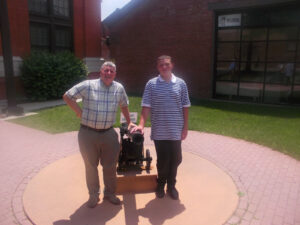 Brendon O’Brien of Ware, Massachusetts was awarded third place in the Junior Paper category, with his work on Alfred Thayer Mahan’s The Influence of Seapower on History. Brendon focused on the impact of Mahan’s book around the world and at home, discussing the impact the book had on Imperial Germany and Japan, Britain and the the United States. His paper provides a fine analysis of the importance of Mahan in the development of the German Kaiserliche Marine and the Imperial Japanese Navy, along with the justification it provided to the British to focus on the expansion and modernization of their fleet. The end result of which, was the Anglo-German naval arms race that served as kindling for World War I. He also discussed the domestic struggles of the United States with regard to the creation of a Mahanian navy, and the importance of both the Spanish-American War and President Theodore Roosevelt in ensuring the construction of a large, modern battlefleet for the United States in the early years of the 20th century. Brendon’s detailed focus and analysis of Mahanian thought in four of the great navies of the modern world help to underscore the importance of Mahan, and reminds us to not set aside his ideas despite the replacement of the big gun battleship with the aircraft carrier and guided missile destroyer.

We would like to extend our congratulations to both these young historians, along with the many other students who wrote on naval history in the national contest. Congratulations are also due to the hundreds of other students who did not make it to the national contest, but worked on naval history at the regional and state level. We hope that we will be hearing much more from them in their future endeavors.

The theme for NHD next year is Rights and Responsibilities in History. We eagerly look forward to seeing what papers, documentaries, exhibits, websites, and performances are submitted to the 2014 National History Day contest. If you are interested in entering the contest and writing about naval history, we’ve provided some suggestions for topics here:

If you have other suggestion for topics, please feel free to make them in the comments section below.