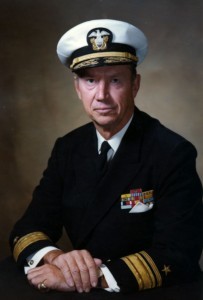 The recent news of Rear Admiral John D. H. Kane, Jr.’s death brought back a flood of memories among those who recall his days as the Director of Naval History and the Naval Historical Center (now the Naval History and Heritage Command). He had a distinguished career, reaching back to his graduation from the Naval Academy in 1941 and many years in the surface navy. During the World War II battle for Okinawa, he survived a suicide boat attack in the Fletcher-class destroyer USS Charles J. Badger (DD-657), and was decorated for his bravery in the aftermath of that attack. He served in several ships, and commanded cruiser Springfield when she was the Sixth Fleet flagship in 1954-55. He served at the Bureau of Personnel, held a diplomatic post at NATO, and as a rear admiral was Commandant of the Ninth Naval District and Commander of the Great Lakes Naval Base. After retirement in 1975, he was recalled to active duty as Director of the Naval Historical Center in Washington, D.C.

The Naval Historical Center was a relatively new entity, created in the early 1970s as a focal point for the U.S. Navy’s diverse historical activities. Previously, some of these activities were located in the Main Navy building on Constitution Avenue (now long gone), at the Navy Annex in Arlington (in the midst of demolition now), while others were in the Washington Navy Yard and at the National Archives in downtown DC. In a stroke of wisdom urged by Secretary of the Navy J. William Middendorf II and supported by the Chief of Naval Operations Admiral James L. Holloway III and Vice Admiral Edwin B. Hooper, the previous Director of Naval History, most of these elements were to be concentrated in the Historical Precinct of the Washington Navy Yard, a cluster of contiguous historic buildings dating from the late 1860s to the 1890s. Thus, fronting the south end of Leutze Park parade ground, and facing historic Tingey House, soon to become the official residence of the Chiefs of Naval Operations, the Center would be part of the “Quarterdeck of the Navy.”

After he was appointed in 1976, Admiral Kane’s first accomplishment was the coordination of the shifting of dozens of staff, and moving thousands of linear feet of boxed naval records, rare and contemporary book collections, and artifacts into this complex. The Center’s administrative offices, Navy Department Library,  Operational Archives, Research Branch, Ship Histories Branch, Curator Branch (including the Photographic Archive), and Navy Memorial Museum  became housed in four contiguous or adjacent Navy Yard buildings. The Navy’s art collection, including Combat Art and the Chief of Naval Information collections, were already located nearby as part of the Navy Recruiting Command’s exhibit production shop. The staffers were then able to move quickly from one building to the next, coordinate activities, and communicate easily in inter-connected buildings. In 1983, to celebrate the completion of this task, Kane dedicated the complex to the memory of Commodore Dudley W. Knox who had served as the Officer-in-Charge of Naval Records and Library from 1921 to 1946 (read our article on Dudley Knox in Pull Together here), thus presiding over the massive accumulation and reorganization of the Navy’s operational records generated during World War II.

During these busy years, Admiral Kane also focused much of his attention on improving the Navy Memorial Museum (now the National Museum of the United States Navy) which had been established in the old Naval Gun Factory’s Breech Block Mechanism Shop with the blessing of then-CNO Admiral Arleigh Burke in 1963. The main efforts involved replacing the entire floor, creating a large World War II exhibit, and establishing ancillary exhibits commemorating the Navy’s service in the American Revolution, Quasi-and Barbary Wars, War of 1812, Civil War, Spanish-American War, World War I, Polar Exploration, and Navigation. To enhance the War of 1812 exhibit, Kane, as Immediate Superior in Command of the Boston-based USS Constitution, authorized the transfer of her recently-replaced foretopmast and fighting top to be erected in the Museum, complete with furled foresail and topsail, shrouds, and ratlines. For good measure, he ordered the building of a Constitution Gun Deck armed with replica long guns and decorated with appropriate images donated from the Time-Life series The Frigates. The “Fighting Top” has been utilized on many occasions as a pulpit for ceremonial speeches, most recently by the CNO.

Admiral Kane also provided much support to the writing, research, and publication of Naval History, particularly in the continuation of the multi-volume documentary editions Naval Documents of the American Revolution and inception of The Naval War of 1812: A Documentary History. He made good use of the royalties earned by the many editions of Samuel Eliot Morrison’s privately published History of United States Naval Operations During World War II by funding a graduate fellowship for promising naval officers interested in pursuing advanced degrees U.S. Naval History. He supported the Secretary of the Navy’s Advisory Committee on Naval History, an independent group of nationally renowned naval scholars, museum experts, and librarians who visited the Center annually to provide outside recommendations to the Secretary on the progress of the naval history programs under his control. Under Kane’s aegis, the Center provided office space for and worked closely with the nonprofit Naval Historical Foundation to preserve the naval records and artifacts under its control and to provide assistance for enhancement of the CNO’s Tingey House residence.

Always concerned to attract more visitors to the Navy Museum, Kane encouraged outdoor exhibits of ordnance, such as the bronze and iron guns along Dahlgren Avenue and in front of Building 1, the old Navy Yard Commandant’s office, and in Willard Park on the Anacostia River waterfront. These included exhibits of a large chunk of armor from a World War II Japanese battleship, a 16″ U.S. Navy battleship gun, and a propeller of battleship South Dakota. Kane arranged the transfer from the Dahlgren Naval Surface Weapons Center of a 14″ railway gun and carriage of the World War I era. The gun tube, originally forged and milled at the Washington Navy Yard for battleship New Mexico, did not arrive until after Admiral Kane’s retirement in 1985. Many, however, would agree that the single most important artifact brought to the Navy Yard during his tenure was the decommissioned Forrest Sherman-class destroyer USS Barry (DD-933), now called Navy Display Ship Barry, maintained by Naval Support Activity, Washington, and host to retirement and promotion ceremonies as well as thousands of Washington, DC visitors each year.

During his nine years as Director of Naval History, Admiral Kane established, strengthened, and inspired many aspects of the Navy’s history programs at a time when the service and the nation were still recovering from the stress of the Vietnam War. There was an urgent need to display and interpret the Navy’s mission in national defense throughout its history. This was the way the admiral saw his role, and he carried it out in dramatic fashion.


Dr. Dudley is a member of the Naval Historical Foundation’s Board of Directors. He served as Director of Naval History from 1995-2005.