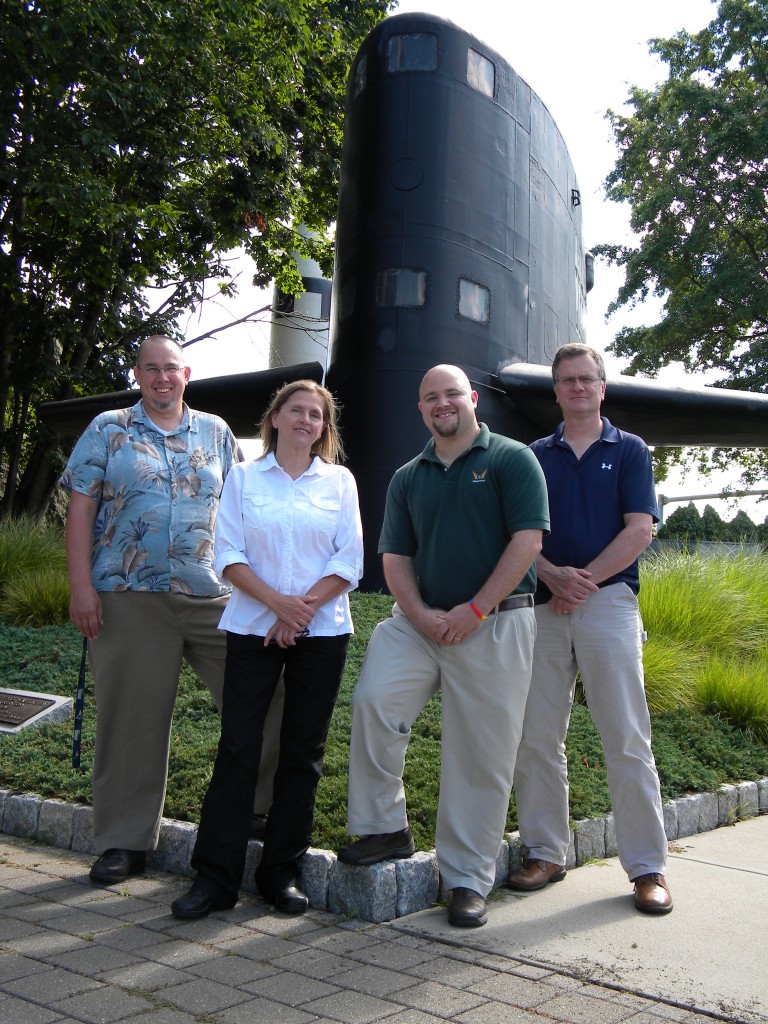 The teachers had the opportunity to explore the museum exhibits and learn about the historic submarine Nautilus (SSN 571), the world’s first nuclear powered submarine, now open to the public as a museum ship. But they also had the opportunity to visit one of the Navy’s modern nuclear submarines, USS Annapolis (SSN 760), an Improved Los Angeles Class fast attack submarine homeported at Naval Submarine Base New London. The teachers were also given a guided tour of the General Dynamics’ Electric Boat Division model room, showing the past, present, and future of submarine construction and maintenance.

First day events included introduction to submarine systems aboard Nautilus, led by Nautilus Officer–In-Charge LCDR Benjamin Amdur.  He then employed the detailed museum exhibits (viewable on-line at www.ussnautilus.org/) to investigate periscope optics and each type of U.S submarine in the 113 year history of the submarine force. Using the museum’s World War II submarine periscopes and a scale-model wall and construction timeline of the evolution of U.S. submarines from the first submarine USS Holland (SS-1) to today’s Virginia Class submarines, LCDR Amdur was able to connect to the teacher’s prior knowledge and set the stage for the two week program.

For the remainder of the first week, presentations on submarine topics were conducted by Submarine Veteran (SUBVET) museum docents, submarine force veterans, and naval engineers to help the teachers make connections between submarine technology and engineering and their subjects’ teaching standards. Presentations included sonar systems, types of propulsion, torpedo tube launched weapons, ballistic missiles, fire control, navigation, communications, masts and antennas, maintenance, submarine operations as viewed from the control room and attack center, and life at sea aboard various types of submarines (diesel subs, ballistic missile subs, and fast attack subs). “If they immersed me in this program when I was in High School, I would have joined the Navy,” said Stacy Haines.

During the second week, teachers began following-up on their multitude of ideas developed in week one. “We’ve given the teachers an in-depth understanding of the technology and the progression of technology aboard submarines,” said Paulson. “Their brains are full of Navy information, and now they’re working hard to correlate that into realistic lesson plans for their students.” Completed lesson plans covered a variety of topics, from using the historic 1958 voyage of Nautilus from Pearl Harbor to Iceland by way of the North Pole to understand navigation, to the use of active and passive sonars, to analysis of food stowage and recipes on board a submarine to understand concepts of proportional amounts. The teachers briefed their plans on the last day of the fellowship, and had a chance to play and improve a mine warfare game designed for one of the lesson plans. “I found this entire week to be amazing. Everything we’ve done here has been so exciting,” said Haines.

One of the highlights of the program was a visit from U.S. Representatives Joe Courtney and Elizabeth Esty, with Submarine Base Commander Captain Carl Lahti on 26 July.  Said Lahti “Every job these days is technical, even blue collar occupations. For example, the base’s crane operators have to be able to think in three dimensions, even though a college education is not required. In the same way, the base needs technically qualified sailors to work on submarines. Connecticut needs local children to envision themselves working in the technical industry to help fulfill the need, and the STEM fellowship is a way to enrich the curriculum and connect students to the area.”  Congresswoman Esty shared the view on the importance of STEM programs. ”This program represents electricity. It will spark teachers to connect students to the material and enhance their knowledge of STEM-related subjects by practical and engaging lesson plans.”

The lesson plans will be included as an online educational resource, hosted on the Submarine Force Library and Museum Association and Historic Ship Nautilus website at www.ussnautilus.org/. Lesson plans from the 2011 and 2012 STEM-H Fellowship Programs can be viewed and downloaded on the Navy Museum’s Cold War Gallery website at: usnavymuseum.org/.