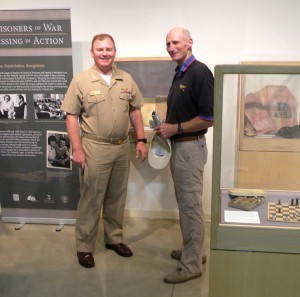 The U.S. Navy’s Cold War Gallery, located at the Washington Navy Yard, pays tribute to the service and sacrifice of the men and women who served during the five tense decades of the latter half of the 20th century. In June, the Naval Historical Foundation cut the ribbon on a new “Battle Behind Bars” exhibit, dedicated to the memory of the U.S. Navy Prisoners of War held during the Vietnam War. On Friday, 28 June, one of those POWs paid a visit to the Gallery, and had the chance to reunite with a unique artifact that he had previously donated – a pair of boxer shorts that he wore during captivity.

Captain Ted Triebel, USN (Ret) was a naval aviator whose F-4 Phantom was shot down over North Vietnam by a surface to air missile in August 1972. Triebel, along with his radar intercept officer Dave Everett, was captured by local militia and soon imprisoned in the Hanoi Hilton. He was held for nearly a year, returning home with honor along with other American POWs in 1973. But Triebel’s captivity had an unusual aspect to it. Prior to departing for what would be his final mission from the aircraft carrier USS Midway (CV 41), Triebel had donned a pair of boxer shorts sent to him by his wife. The white boxer shorts were adorned with large red hearts. The shorts were part of a gag gift of fancy underwear sent by wives to aviators on board Midway. At that time, the carrier suffered from a chronic shortage of fresh water, leading to delays in returning clean laundry. On the day of the fateful mission, the red heart boxer shorts were the only clean ones Triebel had in his possession. Unfortunately for Triebel, when he was captured by the North Vietnamese, he was stripped of his flight suit, and his red boxers were exposed. He ended up wearing them throughout his captivity. Years later, they were donated to the Navy, and they are now on display in the “Battle Behind Bars” exhibit in the Cold War Gallery.

Triebel, along with his daughter-in-law and two grand-daughters, had the chance on Friday for an extensive tour of the Cold War Gallery and the main Navy Museum. During their tour of the “Battle Behind Bars” exhibit, the family viewed the new six minute video telling the story of the POW experience, and Triebel remarked that the video “was very well done, and captured (no pun intended) the essence of the ordeal.” He was also pleased to see his famous boxer shorts on display, stating that “the skivvies were a hit with my granddaughters, and of course brought back many memories for me.” The Triebel family also spent time visiting the Gallery’s Covert Submarine Operations Exhibit and the submarine exhibits in the main museum, both of which were of great interest. Triebel’s father Rear Admiral Charles O. Triebel was a World War II submariner who commanded USS Snook (SS 279) during its first five war patrols after the boat’s commissioning.

The past year has been a busy one for Triebel, as he had the chance to visit Vietnam last year (see photo below), and reunite with former enemies in the village of Ha Tran – the same men who captured him in 1972. We thank him for taking the time to stop by the Cold War Gallery to recall those difficult days of captivity so long ago. 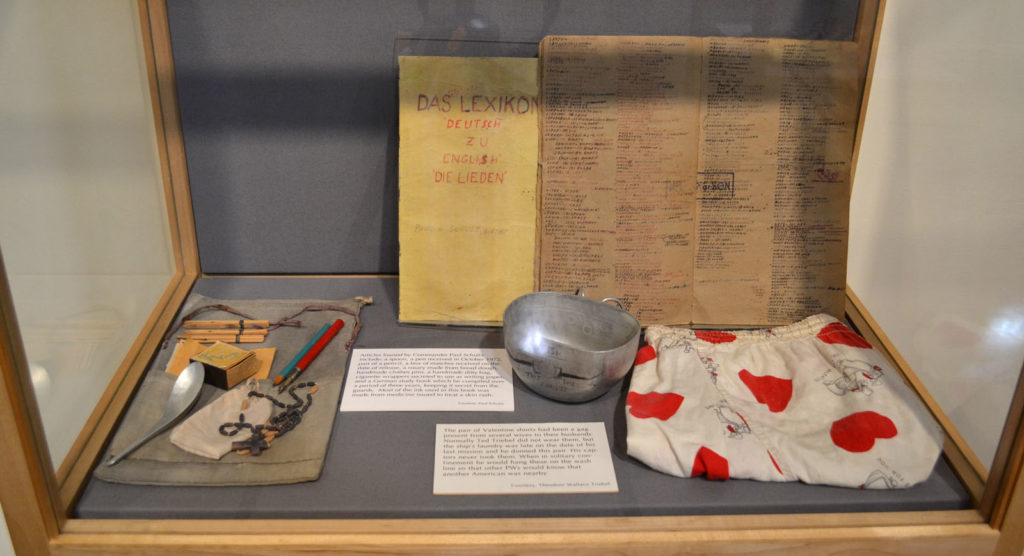 POW artifacts on display in the Cold War Gallery, including Triebel’s boxers (at right)

Triebel poses with the Vietnamese militiaman who unzipped his flight suit on the night of his capture and “discovered” the heart boxers, which are shown in the photo he is holding (photo courtesy Ted Triebel)