(Editor’s note: This is the twelfth in a series of blogs by Norman Polmar, author, analyst, and consultant specializing in the naval, aviation, and intelligence fields. Follow the full series here.) 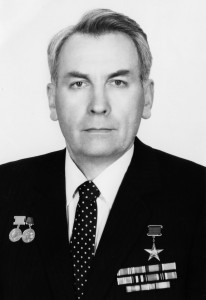 In 1991 the U.S. Naval Institute published my book Submarines of the Russian and Soviet Navies 1718—1990, written in collaboration with Jurrien Noot, a serving officer in the Royal Netherlands Navy. The book was the first English-language work to provide a realistic history as well as comprehensive technical data on Russian-Soviet submarine developments and operations.

Of course in December of that year the Soviet Union collapsed and, briefly, considerable information on Soviet submarines became available.

The following year I received a fax from Academician Igor Dmitriyevich Spassky, the director and general designer of the Rubin Central Design Bureau in St. Petersburg. Spassky, a graduate of the Dzerzhinsky Higher Naval Engineering School in Leningrad, served in the Soviet Navy after World War II. After earning an advanced degree and brief service in a cruiser, he was assigned to submarine design work at Central Design Bureau No. 18—now named Rubin. He was discharged from the Navy in 1955, transferred to the reserves, and continued to work at the design bureau, rising to director of the prestigious organization in 1974.

In Spassky’s fax of  22 June 1992—this was before the Internet and e-mails—he wrote: “With great interest we got acquainted with your book Submarines of the Russian and Soviet Navies and we are grateful to you for your fundamental classic analysis of the Russian submarine fleet history.”

He noted that, “If you have an intention to publish new editions of the book  . . . we are prepared to offer our assistance pertaining to submittance of some more accurate data and additions which, without diminishing the merits of your book, could serve to increase confidence in some data given in the book.”

Spassky also wrote, “We invite you to visit Saint-Petersburg, to see the expositions of our museum and to visit the Narodovolets [Russian 1931 submarine] which has been restored by us to become a memorial museum.”

At almost the same time, I received an invitation from Fleet Admiral V.N. Chernavin, the last commander-in-chief of the Soviet Navy (1985-1991) and the first head of the post-Soviet Navy (1991-1992) to visit him in Moscow. Chernavin was anxious to produce a comprehensive, non-political history of the navy, something not possible during the Soviet regime. He wanted me to help develop the project and to be editor for the English-language edition.

Thus, my son, Michael, and I flew to Moscow in November 1992, to be Admiral Chernavin’s guests. (I had previously been to the Soviet Union in 1973 as a guest of the Institute of USA Studies and the Soviet Navy.)  While in Moscow we established contact with Academician Spassky, who knew about our visit, and he invited Mike and me to be his guests in St. Petersburg (formerly Leningrad).

An entrepreneur as well as engineer, designer, and scientist, Spassky had constructed a 100-room hotel—the Neptune—adjacent to the Rubin design bureau. Mike and I arrived at the hotel early on Saturday morning, 14 November, and were provided with a spacious and comfortable suite—sitting room, bedroom, bath.

After we washed up and changed (necessary after the eight-hour train trip from Moscow), we walked the two blocks to the Rubin office complex. There we met Spassky and about ten of his senior staff. After we exchanged gifts (books), Spassky presented me with a scale model of the then relatively new Kilo submarine.* We visited the Rubin museum spaces, filled with memorabilia and models of all Rubin-designed submarines—built and not built. The latter were particularly fascinating!

Among the designers Spassky introduced to Mike and me was Victor Semyonov, who had joined the design bureau in 1947 and had worked on several innovative submarine designs. Subsequently he was deputy to Academician S.N. Kovalev, the chief designer of the Yankee, Delta, and Typhoon strategic missile submarines, the last the largest undersea craft ever constructed. At age 70, Semyonov was still very spry and sharp. He had no English speaking skills, but when Spassky appointed him as my “liaison” with Rubin we soon became fast friends, with the charming Irina Vorbyova as our interpreter.

After refreshments, we drove to the Narodovolets memorial-museum and toured the restored 1930s-era submarine. Then back to the hotel for an early dinner, and off to the ballet. (I soon became a great fan of Russian ballet.)

Sunday was equally busy. During our discussions, Spassky and I decided that we would undertake a joint book project that would highlight Soviet submarine developments. This was the genesis of the book Cold War Submarines, published in 2004 with my byline shared with American submarine technologist K.J. Moore. (For political reasons, Spassky and Seymonov could not be cited as coauthors.)

During my several subsequent visits to Rubin I met with groups of designers to discuss Soviet submarine development. One of the most senior participants in these discussions was Sergei  Kovalev. Beyond discussing the technical aspects of the Typhoon  submarine, he mentioned the debate then taking place in the U.S. Navy about assigning women to submarine duty. Kovalev proposed that the U.S. Navy purchase Typhoon submarines: Internally they had two main hulls with three connecting sections. Thus, he explained—with the humor characteristic of him—that the Navy could place the men in one hull and women in the other, and carefully monitor  their interactions! (I wrote up his suggestion in the August 1995 issue of the Naval Institute Proceedings—“The Typhoon Solution.”)

Semyonov was always present, sharing with me much of his vast store of knowledge of Russian-Soviet submarines. But we also traveled around the area—visiting museums, shipyards, the Hermitage, and just walking and talking. I convinced Spassky and Semyonov to share their knowledge and photo files of early Russian submarines in the small, English-language book Submarines of the Tasrist Navy (1998), which I edited.

In 1993-1994 the U.S. Navy acquired funding to support exchanges with Soviet and Eastern Bloc historians. This program contributed to the funding for me to attend a history conference in Moscow, where I gave a paper on U.S. anti-submarine efforts during the Cuban missile crisis (1962), and to go on to St. Petersburg.

The funding also enabled me to invite Spassky to the United States. Accompanied by a Russian naval officer engaged in the Chernavin history project, and with the help of George Federoff, the U.S. Navy’s top Russian linguist, Spassky’s visit in October 1993 was a great success. Highlights of the visit included Spassky presenting a paper on the history of Soviet submarine development (which I read in English) at a Naval Academy conference, and a lengthy interview with the staff of the Naval Institute. He spoke to other groups and we had an opportunity for private discussions (with Federoff  interpreting).

During my May 1994 visit to St. Petersburg and Rubin, Spasky arranged for me to give a slide presentation on the current U.S. submarine situation at the Hall of Scientists. Some 200 submarine officers, designers, and engineers were in attendance. As the session ended, several individuals from the audience came up to me, most asking me to sign copies of my books. But one gentleman said that he was not pleased with me.

When I was back in Russia in September-October 1994 I visited both Rubin and Malachite. The head of Malachite,  Dr. A.V. Kutenikov, was in Finland when I arrived at his bureau on 3 October. Antonov  greeted me and introduced me to several of the senior designers; we had a prelimary discussion and lunch. Among the designers was Radiy A. Shmakov, the deputy chief designer of the remarkable Alfa nuclear attack submarine. Three days later, on the sixth, I returned to Malachite and was met by Kutenikov, who was affable, cordial, and most helpful. Then and on future visits he arranged discussions with his designers and made his archives available to me. Antonov was named as my liaison with the bureau and, with Shmakov and others, provided considerable material for Cold War Submarines.

At the time I did not realize the severe competition between the two surviving submarine design bureaus—Rubin and Malachite. Spassky did not appreciate my new relationship with Malachite. He made that very clear when he came into one of my sessions with Rubin designers and, slamming his fist on the table, launched into a tirade against Malachite.

I believe that our relationship further declined as we developed Cold War Submarines and Spassky saw the influence of Malachite on the book. While Semyonov and other Rubin designers and I continued to meet and to correspond, my valued relationship with Spassky had ended. And, a short time later, the Russian government closed down the open exchanges between Westerners and defense-related activities. It had been a short-lived and remarkable “window of opportunity.”

* Courtesy of the design bureaus and friends, I now have shipyard-made scale models of the Kilo, Yankee, Papa, Mike (Komsomolets), and Typhoon submarines, the last more than three feet long. 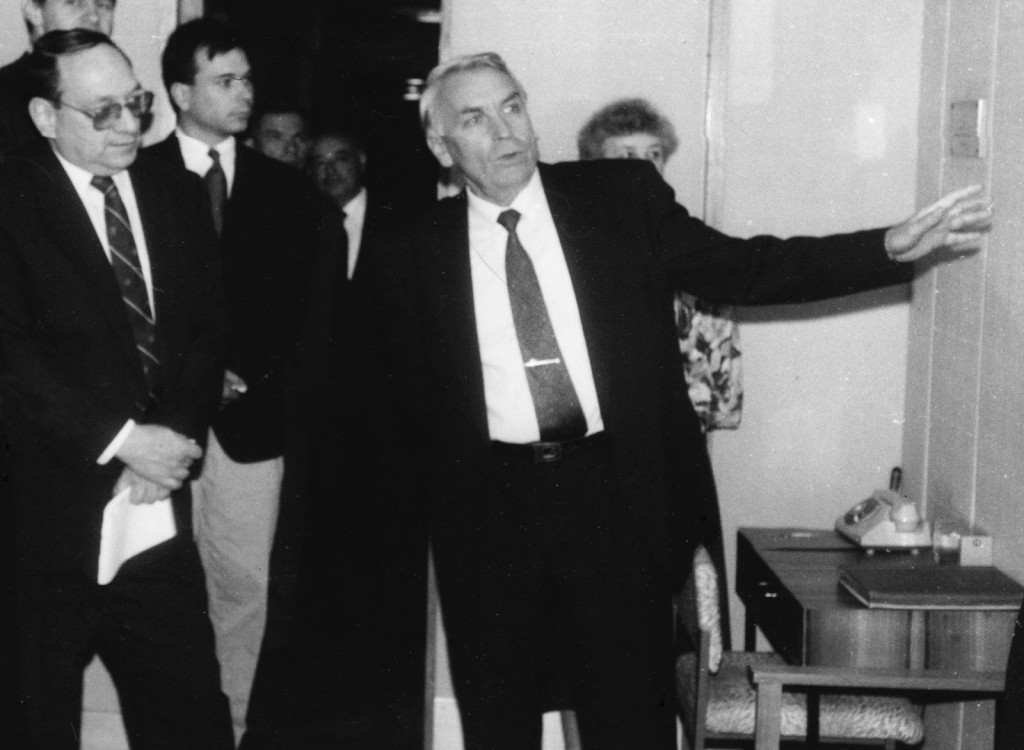