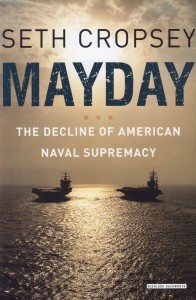 Seth Cropsey, a Navy secretariat official in Ronald Reagan and George H. W. Bush administrations and currently a Senior Fellow at the Hudson Institute, is worried about the future of the U.S. Navy and the fate of the nation. Because of declining ship numbers and the lack of strategic focus on its most serious naval rival, China, the United States is heading in his view toward the same decline in global influence that once great powers such as Venice and Spain suffered when they failed to maintain their naval supremacy. There is no doubt that as Cropsey argues in Mayday that the United States needs a strong and globally deployed Navy even as it reduces defense expenditures in the drawdown from the Iraq and Afghanistan wars, but Cropsey’s exaggerations about the state of the US Navy and America’s strategic position weakens the value of his effort.

America is a military and economic colossus. America spends nearly the same on defense as the rest of the world, allies and non-allies, does combined. The U.S. Navy is ten times bigger in tonnage and capabilities than the next largest, the Royal Navy. Its several air forces outmatch all others. The U.S. Army is more lethal than any other. The U.S. Marine Corps, our second army and fourth air force, is bigger than the entire British military. The U.S. Special Operations Command is bigger than the entire Canadian military. No one can match America’s military technology. We spend roughly $80 billion dollars a year on defense R&D, which is about 6 times the rest of world combined, and we have been doing so, as measured in constant dollars, for 70 years.  America is the 3rd most populous nation in the world, but is only 4 percent of total world population. That 4 percent, however, accounts for nearly a quarter of the world gross product.

America is also a very fortunate country. It is protected by two big oceans and lives next to two weak neighbors. America is not Poland, caught between Germany and Russia, and it is not Israel, surrounded by hostile neighbors. It is not even the United Kingdom or Japan, confined to islands that lie a few miles from a continent filled with rivals. Since the 19th Century trouble has had to travel a long way to reach us. And we have a powerful navy to keep it that way. The U.S. Navy is our first line of defense, pushing American power to the other sides of those oceans.

But Cropsey sees the U.S. Navy as a navy in uncontrollable decline and dragging with it America’s status as a great power. He is appalled that the Navy is being cut, that defense is being treated just like any government program in the sequestration debacle. He is angry that U.S. has not articulated a naval focused grand strategy that would reassure Asian allies that they will not be abandoned to subservience by a rising China. And he is simply apoplectic that the number of ships in the US fleet is falling below 280, ten percent under the Navy’s own goal, and 25 percent less the minimum of 350 that he thinks is needed for global presence and power projection.

The fleet arithmetic is simple enough. US warship costs are rising and the shipbuilding budgets are stagnant or falling. The Navy’s ships are wearing out and retiring faster than they are being replaced. Given projected building rates, it is obvious where things are heading. Much though is missing from Cropsey’s analysis.  We do not get a good understanding of the shipbuilding problem and especially of the reasons why destroyers are now three billion dollars and carriers 13 billion dollars a piece.  Cropsey argues for stability in U.S. shipbuilding when in fact the business is quite stable. Though their ownership has consolidated, none of the six big private yards—in contrast to public yards—have closed since the end of the Cold War. With reasonable behavior, their production backlog and budgets are predictable.  The one yard in trouble –Avondale—got that way by allowing huge problems to develop with the construction of the LPD-17 class amphibious ships, not in the construction a DDG-51 class destroyer as Cropsey claims, a ship type the yard never built. With under utilization of capacity in the existing yards, the Navy foolishly sought out two additional yards to design and build littoral combat ships. Once on the Navy dole, these yards do not easily return to the vagaries of the commercial market as witnessed by the Navy’s inability to select a winner from the designs of the supposedly competing yards.

However, the basic problem in shipbuilding is not the politics of protecting local employment, but rather the need to build ships that can survive in range of very capable enemies. The threats are many and hard to counter because they are mostly mirror images of our own capabilities or the product of contractor imaginations. As Cropsey frequently notes the loss of one carrier would be devastating, but so too for any other US combatant. The ring of protection costs much. Add some offense capability and you are going to be building expensive ships in relatively small numbers.

The calculation of the numbers needed eludes Cropsey. He examines several recent studies on the design of the fleet, but uncritically. His number 350 is mostly for presence and is not broken down by type. There is no convincing fleet design offered because we lack a clear naval threat. We are not facing the Japanese Navy, German U-boats, or Soviet ballistic and cruise missiles. Our multi-billion dollar ships deliver humanitarian relief more often than ordnance on target. We sail not alone, but rather with the ships of most of the other navies in the world. The menace is pirates or terrorists in small boats, and the Chinese threat is mostly potential rather than reality.

Cropsey is skeptical about Jointness, an expanding civilian staff at the Office of the Secretary of Defense, along with nation building and land wars in the anti-terrorist fight, all good things to avoid if you favor building more warships. The problem is you cannot make enough of them these days to have them considered expendable as long as they are crewed by American sailors and fly the American flag. If they are not considered expendable, they must then come with a cocoon of defenses that is expensive, and that keeps the numbers declining in the absence of a true challenger to American power. There is no need to signal Mayday. A smaller US fleet is merely the consequence of our power, not a sign of weakness. We really are not that afraid of any nation.

Dr. Sapolsky is Professor of Public Policy and Organization, Emeritus, at MIT and the former Director of the MIT Security Studies Program.