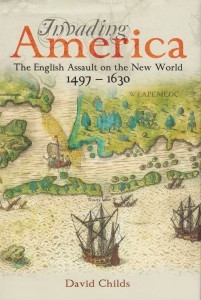 The arrival of British settlers in the so-called “New World” has been characterized at various times as a discovery, an encounter, or even a clash of civilizations. All these descriptions have merit, but David Childs contends that perhaps the century of English expansion into the Americas is best viewed as an invasion. It possessed all the key characteristics of an invasion; early settlements functioned more as beachheads than towns, and many of these had to be abandoned because of reinforcement and supply problems. The various efforts to establish such footholds, which Childs regards as multiple events in a single, long-term operation rather than separate episodes, depended heavily on control of the seas to provide a steady stream of supplies. The most important act upon landing was not planting crops but building fortifications against Indian or Spanish attack. Only with the success of the Massachusetts Bay Colony in 1630 did the operation change from establishing beachheads to conquering the land and building permanent colonies.

A retired naval officer, Childs is an authority on Tudor maritime and naval history, and the author of Tudor Sea Power. He writes from the English perspective, though acknowledging the role of Indians, Spanish, and – very briefly – the French in shaping English actions. In particular, he contrasts the Spanish conquest, which was wildly effective and resulted in the brutal enslavement of most of the Native population, and England’s more limited ventures. The difference was one of command and control, aims, and resources. English monarchs were far more interested in continental matters, and refused to invest heavily in colonial expeditions that often ended in failure.  Instead, charters insured that the Crown was, “a beneficiary but not an investor” in colonial enterprises (44). The result was that settlements in the early years were woefully underfunded and poorly planned, and several perished as a result. Meanwhile, English monarchs could wait patiently, without suffering financial loss, until the New World enterprises became lucrative, at which point they began to enjoy the benefits.

Childs relies on a topical structure to analyze early English colonization. After describing the various attempts to establish settlements in the New World, he goes on to describe the structure, objectives, tools, and challenges settlers encountered. He emphasizes the maritime dimensions of the invasion, noting that the ability to navigate to the Americas and bring supplies and reinforcements without interference was crucial. Invading America provides insight into the nature of shipboard life and the science of navigation in the era. The nature of colonial enterprises as amphibious operations posed problems, however, for it led to joint commands in which clashing egos often did as much damage to the colony’s survival as Indian attacks. It was the threat of Indian or – even more terrifying – Spanish attacks that insured the first priority upon landing was the construction of fortifications.

Those fortifications functioned well enough, for the original inhabitants of the continent missed their one opportunity to expel the newcomers from their land. Childs argues that the Indian tribes who first encountered English settlers could have ejected them from the continent forever during the early years, when settlements were weak and ill-supplied. They did not, and after 1630 it was the English, who had a seemingly limitless population supply to send over, that were on the offensive. This largely fits into the historical consensus, but it must be noted that Childs’ characterization of Anglo-Indian relations is rather one-sided.  He fails to go into any great detail about Native American society or what motivated their relations with the newcomers; this work is almost entirely from the English perspective. Moreover, the invasion paradigm breaks down a bit when one considers that not all Anglo-Indian relations were entirely hostile. Jamestown and Plymouth colonies arguably owed their survival as much to getting food supplies from Indians as from resupply from Europe, and historians now realize that there was an extensive cultural exchange that took place between white and Native American societies along with trade. This aspect of colonization needs to be addressed in more detail to fully prove Childs’ argument.

That said, there remains much to praise here. Childs’ systematic study of early English efforts in North America is a strong contribution to the literature, where far too many works skip ahead to Jamestown and undervalue the crucial groundwork that came before. Invading America is aimed primarily at a popular audience, as evinced by an appendix listing tourist sites to visit, and does an excellent job in this regard, providing readers a fine overview of colonial ventures. A wealth of illustrations helps the reader envision the technical details of ships and fortifications, a useful tool for nonspecialists. Professional historians will find little new here, although it could prove valuable in an undergraduate survey of the Atlantic world or colonial America, provided students are aware of differing perspectives on the interaction between Indian and English populations.

Thomas Sheppard is a PhD candidate at The University of North Carolina at Chapel Hill.  He is currently working on a dissertation project entitled “Petty Despots and Executive Officials: Civil-Military Relations in the Early American Navy,” which explores questions of civilian control in the early republic.