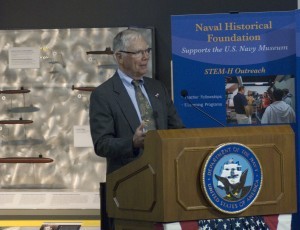 Each summer we take a day to meet with our members, volunteers, and friends, to let them know what the Foundation has been up to, and what our plans are for the future. Last Saturday, 15 June, we once again gathered in the Cold War Gallery with a great crowd of nearly 100 of our supporters for this Annual Meeting. The highlight of the day was the David Leighton Lecture, delivered by Rear Admiral Robert Shumaker, USN (Ret), followed by the debut of a new exhibit, entitled “Battle Behind Bars,” which remembers the service and sacrifice of naval aviators held as Prisoners of War during the Vietnam War. This year marks the 40th anniversary of their “Return With Honor” to the United States.

The day began with a meeting of our Board of Directors, which saw the election of three new board members: Captain Maurice A. Gauthier, USN(Ret), The Honorable Steven S. Honigman, and The Honorable Franklin C. Miller. We were pleased to welcome them on board, and we look forward to their important contributions to our mission. We also thanked two retiring board members, Rear Admiral Mack Gaston, USN (Ret), and Captain David Cooper, USN (Ret). They have both been a big part of what we’ve accomplished over the past decade, and we thank them for their time and their passion for naval history.

By late morning, a large crowd had gathered at the entrance to the Cold War Gallery’s Covert Submarine Operations exhibit. NHF leaders addressed the crowd about our financial status, ongoing programs and fundraising efforts, and NHF members had the opportunity to vote on the three new board members, all of whom were approved unanimously. But the high point of the program was the David Leighton Lecture, delivered by Rear Admiral Robert Shumaker, USN (Ret). This annual lecture at our Membership Meeting is named for David Leighton (who was present on Saturday) and who remains the most generous individual donor to our NHF programs. Shumaker was a POW in North Vietnam for more than 8 years, and he shared his thoughts on that experience with the gathered crowd. He spoke of the determination and courage of his fellow POWs, and listed the seven lessons he learned in captivity. The last of those seven lessons was that a sense of humor was critical to survival, and he told several tales from imprisonment, tales that had the gathered crowd laughing heartily. It was moving speech, which ended with a rousing standing ovation for this courageous leader and his fellow POWs.

Following Rear Admiral Robert Shumaker’s remarks, the crowd watched the new 6 minute video on the POW experience, commissioned by the Naval Historical Foundation, produced by NHF member Commander Bob Rositzke, USN (Ret), and now playing in the South Hall of the Cold War Gallery. With the end of the formal program, the visitors had a chance for their first look at the new exhibit, which features artifacts created by POWs, a model of a prison camp, a POW-MIA remembrance table, and stand-up displays recounting the harrowing experience these men were subjected to.

The final highlight of the day was (of course!) the catered lunch provided to all of our members and friends. Old shipmates had the chance to catch up with each other, and to meet other Navy veterans who support the Foundation. And most importantly for us here, the staff of the Foundation, we had the chance to mingle and chat with the people who make our job possible: our tireless supporters. We want to thank each and every one of you out there who gives time and money to our cause, and we look forward to seeing you at next year’s Annual Membership Meeting!