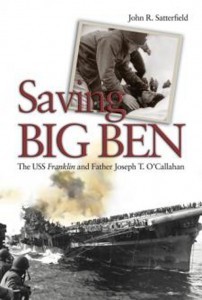 Appearance wise, Saving Big Ben is an impressive book. Beautifully bound with an appealing jacket, featuring a pleasant type and format, and having enticing blurbs on the back cover, the book brings a sense of anticipation to a prospective reader. However, when an author undertakes to retell a well-known story, he needs more than pretty pages. This is one of the best known stories of heroism and valor during World War II, especially in the hard-fought naval and island battles of the Pacific. Even those already familiar with the incomparable Chaplain O’Callahan and the “never-say-die” determination of the Commanding Officer and crew of USS Franklin will find a new cause for admiration in this work by John Satterfield.

While I found the book engrossing I also found it frustrating. It is engrossing because it brings Father O’Callahan to life again and makes his heroic exploits on USS Franklin all the more astounding. The author has taken great pains to search not only the Navy’s archival records but to explore relevant treatments in the popular press and make extensive use of personal interviews with Father O’Callahan’s relatives and friends. This is perhaps its greatest strength.

The author has used those rich resources to present Joseph T. O’Callahan as a man with a background appropriate to his destiny and a life consistent with his faith. His story is told in such a way that each event is preparatory to the next, culminating in his extraordinary fulfilling of his calling in ministering to the dying, wounded, and survivors of the terrible devastation of the crippling airstrike against USS Franklin.

In spite of this, I had to read the book twice before I formed a very positive opinion; not because the story is not exciting but for other reasons.

The author has taken meticulous care to document his work. While this is commendable and will be applauded by those who love the minutiae of the trees, it is disconcerting to those who want to experience the forest. I found the notes excessively redundant.   I also found the use of Latin quotations at the beginning of most chapters more distracting than helpful. It was not clear what the author had in mind by using them. Father O’Callahan’s Jesuit identification was already amply established and the book was not presented as a meditation needing the form of a formal prayer or familiar religious rites for its context. It is a venture into historical and biographical writing rather than a religious reflection and should be able to stand on the legitimacy of those areas of research and writing.

Also frustrating was the insertion of what the author calls Prologue as Chapter One. A better place for that material would have been in an Appendix with attention drawn in the Introduction to its availability. It would have been far better for the author to start the book with the interesting background of the O’Callahan family and progressing smoothly from there in the manner of the rest of the book; making Chapter 2 actually Chapter 1. The Prologue seems to have been a stand-alone article which would have been more appropriately published in Naval Institute Proceedings or a similar journal. The notes in the Prologue are often used as opportunity for the author to take exception to other writer’s positions or views. This may be exciting to scholars or persons already deeply immersed in the incidents and details of the War in the Pacific, but will do little to encourage the general reader to get to know either Father O’Callahan or USS Franklin.

Now, having pointed out these areas of concern, let me express appreciation to the author for bringing to life again the magnificent story of the devastation suffered by Franklin and the incredible heroism of its crew, particularly its Chaplains. Chaplain O’Callahan acquitted himself well beyond the call of duty and made it an admirable thing to be a Navy Chaplain. The author brings his readers along as Joseph O’Callahan decides to become a Jesuit then with the same measure of devotion pursues service in the Navy as a Chaplain. He is presented as one who gave himself tirelessly to every task from the day he began active duty. His contributions to other duty stations, including early involvement in USS Ranger gave evidence that he was equipped to handle the rigors of carrier duty in Franklin as she went in harm’s way.

The author gives the ship a life of its own as he tells his readers of the preceding United States ships that bore that name and how difficult it was to even imagine what would happen to her. The author does not shy away from acknowledging and treating appropriately some of the conflicts in Chaplain O’Callahan’s life, for instance, over attitudes toward the Japanese. His beloved sister’s oppressive experiences as an interned missionary in the Phillipines and his acceptance of his sister-in-law who was Japanese-American were intertwined in his working his way through the role of the Japanese in his life and thought.

Anyone who has heard the story of USS Franklin and its indomitable Chaplain O’Callahan will thrill to the place they both have in American naval history and be grateful to John Satterfield for making the story come alive again.

Commander Murphey retired from the Navy as Command Chaplain, USS Midway (CV41). Prior to active duty he was Professor of Religion and Director of Interdisciplinary Humanities Program, Transylvania University, Lexington, Kentucky.