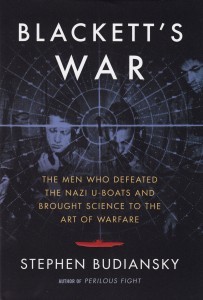 September 1, 2013 will mark the 74th anniversary of Hitler’s invasion of Poland and the start of World War II. Just two percent of the U.S. population is old enough to remember the war’s early years, so most Americans know about the war and its impact only through popular media, leaving them with an incomplete and distorted understanding of the 20th century’s most important event. D-Day and Iwo Jima may figure prominently in America’s historical consciousness, but other campaigns and other war theaters go unnoticed.

One of the least considered, but most critical, aspects of the war was the contest for sea control, the pervasive conflict British Prime Minister Winston Churchill called “the Battle of the Atlantic.” In its scope and significance, the sea war was vast. It covered more area and lasted longer, 1939 to 1945, than any land campaign. More than 70,000 Allied naval personnel and merchant seamen lost their lives with German U-boats sinking 3,500 commercial vessels and 175 warships. The Kriegsmarine also paid an enormous cost trying to cut Great Britain’s seaborne lifeline; more than 30,000 German sailors, a grisly 75-percent casualty rate, and 783 submarines never returned.

In his six-volume war memoir, Churchill wrote, “The Battle of the Atlantic was the dominant factor throughout the war.  Never for one moment could we forget that everything happening elsewhere, on land, on sea, or in the air, depended ultimately on its outcome.”

Churchill was right. While serving as First Lord of the Admiralty before becoming Prime Minister, he described the U-boat war as, “cruel and ruthless… hard, widespread and bitter, a war of groping and drowning, a war of ambuscade and stratagem, a war of science and seamanship.”

In Blackett’s War, Stephen Budiansky has focused on the battle’s science. He writes, “From 1941 to 1943, a small group of British and American scientists, almost entirely without military experience or knowledge, revolutionized the way wars are run and won.“

These few dozen scientists, several of whom were extreme leftists, more than mildly eccentric and frequently irritating to the naval and military commanders they advised, created the science of operations research (OR), the application of systematic statistical analysis to improve processes and facilitate critical decision-making. Using “the tools of their trade – a thoroughly scientific mind-set backed by little more than simple mathematics and probability theory – they repeatedly demonstrated to disbelieving admirals and generals ways to double or triple the effectiveness of the faltering Allied campaign against the German U-boats…The scientists’ unconventional insights achieved the near-miraculous in a battle crucial to the larger struggle to defeat Hitler’s Germany.”

The central figure in Budiansky’s history is British physicist Patrick Blackett, a naval officer and Great War combat veteran who left the Navy, studied at Cambridge and conducted ground-breaking research for years in the University’s Cavendish Laboratory, one of the world’s leading experimental facilities in the physical sciences. Blackett would receive the 1948 Nobel Prize in Physics for his investigations of cosmic rays, high-energy sub-atomic particles.

The eclectic scientific group that included specialists in every discipline from economics to entomology, known as Blackett’s Circus, was responsible for development of a radar guidance system that greatly improved the accuracy of anti-aircraft guns during the Blitz, the Luftwaffe’s nightly bombing attacks against London and other cities.  Blackett, his team, and later, their American counterparts advocated installation of radar on British warships and patrol aircraft to locate U-boats, developed tactics for aircraft depth charge attacks that increased kills by a factor of ten, and even suggested new aircraft camouflage to avoid early detection by U-boat lookouts.

The scientists also coordinated with British code-breakers who analyzed encrypted German naval communications to facilitate U-boat location. The Circus argued for increased allocations of aircraft to anti-submarine patrols and away from long-range strategic bombing, based on statistical proof of strategic bombing inefficiency.  Finally, Blackett proved that large merchant ship convoys were far safer than the smaller groups the Admiralty championed, since larger convoys required proportionately fewer armed escorts that could attack threatening U-boats with comparable effectiveness. OR even improved the most mundane processes. After observing a long line of soldiers washing their mess kits after a meal, a scientist saw the troops used two tubs to wash their kits and two to rinse them, even though washing took three times longer than rinsing. By providing three tubs for washing and just one to rinse, the bottleneck was eliminated and the line disappeared, saving much valuable time.

Despite the nearly pathetic frailty of the weapon systems utilized and the absence of all but the most rudimentary mechanical computers, OR revolutionized warfare by emphasizing more efficient and effective use of existing systems rather than costly development of new weapons. This approach contributed strongly to the Allied victory. Today, a much enhanced OR approach is integral to successful military activity.

Budiansky’s account is wonderfully done, well written, suspenseful and full of the personal and organizational conflicts that can make otherwise pedestrian stories so colorful. In addition to its entertainment value, Blackett’s War speaks clearly and authoritatively about a multitude of technical subjects. The author knows what he’s doing.  He holds a chemistry degree from Yale and a graduate degree in applied mathematics from Harvard, where his father taught mechanical engineering. Among other topics, he has specialized in writing about military intelligence and cryptology. Budiansky’s book is clearly worth reading.

Dr. Satterfield teaches college and served as an ASW intelligence officer in a USNR maritime patrol squadron.  His latest book, Saving Big Ben, is available from the Naval Institute Press.