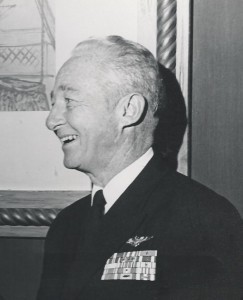 (Editor’s note: This is the eighth in a series of blogs by Norman Polmar, author, analyst, and consultant specializing in the naval, aviation, and intelligence fields. Follow the full series here.)

A telephone call in early March 1974 from one of my consulting customers in the Navy Department alerted me to a problem:  The Chief of Naval Operations, Admiral Elmo R. Zumwalt, was upset with me. I had written a brief article in the March issue of the Naval Institute Proceedings—“Sea Control Ship and Navy Missions”—raising questions about the proposed sea control ship, one of several Zumwalt ship initiatives.

I had met the admiral several times before, and was managing two small programs for him, one producing the Navy guide book “Understanding Soviet Naval Developments.” Further, on 7 March I was to host a dinner at the National Press Club for Admiral Zumwalt; Tom Wolf, the Rand Corporation’s Soviet expert; John Moore, the new editor of Jane’s Fighting Ships; and Peter Hackess, a celebrated TV commentator (and a Naval Reserve officer). The next day, the eighth, we were to record a TV show narrated by Hackess on the importance of sea power in the modern age.

I was told to be in Admiral Zumwalt’s office at 12 noon the day after the call. It would be a one-on-one discussion over lunch in his office. For most of an hour, Zumwalt, a surface warfare officer, explained to me why I was wrong in my commentary and why the Navy needed more aircraft carriers—large nuclear-propelled CVNs and small, sea control ships.  For the last few minutes of our lunch, I tried to make five or six points, attempting to justify my commentary and identifying flaws in his thesis. Then there was silence for a minute or two.

He responded along the lines of, “I’ll tell you what I would like you to do,” he began. He would ask Vice Admiral F.H. (Mike) Michaelis, Commander, Naval Air Force Atlantic Fleet, to come up from Norfolk and, with Vice Admiral William D. (Bill) Houser, the Deputy CNO for Air, to put me on the correct path to understanding the carrier situation.

Michaelis was a pilot, having seen major action in World War II, earning the Navy Cross, Silver Star, and Distinguished Flying Cross. In the 1960s he became the second commanding officer of the world’s first nuclear-propelled aircraft carrier, the Enterprise (CVAN 65). I had not previously met the admiral.

At the time I was consulting to Houser, having begun working for that office in 1970 (when Admiral Weisner “borrowed” me from the Northrop Corporation; see my earlier blog). Houser saw combat in a cruiser in the Pacific during World War II and then as a fighter pilot in the Korean War. He later commanded the large carrier Constellation (CVA 64) and served as military assistant to the Secretary of Defense.

Our respective schedules delayed our meeting. Finally, on Sunday morning, 9 June, Michaelis, Houser, and I had breakfast at the visiting flag quarters in the Washington Navy Yard. We discussed aircraft carriers for several hours. I came to understand the need for sea control ships, primarily for the anti-submarine role. My “sticking point” on large carriers was cost—the next CVN would cost more than $2 billion. As we continued, I asked if it was possible to design and build an “austere” carrier and then add features at a later date, so that the construction costs could be reduced.

My question and the following discussion led to one of the admirals asking a steward for some large sheets of paper and pencils. He brought in a role of brown wrapping paper and we three sprawled on the floor sketching “flattops.” Finally, Michaelis suggested that I undertake a study of how to build such an “envelope aircraft carrier” that could be “filled up” at a later time.

Admiral Michaelis and I kept in contact and, when I was working on a study of tactical nuclear war at sea, he invited me down to his Norfolk headquarters to give a briefing on the subject to his staff. During lunch at his headquarters he asked me, “Where are we with the envelope aircraft carrier study?”  “Nowhere,” I responded—I had not followed up on our meeting because Admiral Zumwalt had retired and, I believed, Houser would leave in the near future.

Admiral Micahelis informed me that he would soon become the Chief of Naval Material and that he would fund such a study. On 18 April 1975, Admiral Michaelis was sworn in as head of the Naval Material Command in Washington with four-star rank. He kindly invited me to the ceremonies. A day or two later his secretary telephoned me with an invitation to have lunch with the admiral. I responded that I would be pleased to meet with him, but that I preferred to host him at the National Press Club in Washington rather than have lunch in his office. We arranged to have lunch at the club on the 23rd.

As soon as we had ordered lunch, I handed the admiral a copy of the formal proposal from my firm, the Santa Fe Corporation, to undertake “Analysis of the Feasibility of the Envelope Aircraft Carrier Concept,” dated 5 March 1976. The effort would be undertaken with the firms of BDM and Gibbs and Cox as subcontractors. The later was one of the nation’s top naval architectural firms. The proposal stated:

It is our belief that the ”Envelope Aircraft Carrier Concept” may provide an approach through which significant reductions in construction costs can be attained without unacceptably impacting on basic carrier effectiveness.

Accordingly, the goal of this effort is to identify aircraft carrier features which significantly contribute to total construction cost and which can be deleted or delayed without impacting on carrier size and basic effectiveness. Special emphasis will be given to features for which space can be reserved for subsequent installation during the operational lifespan of the carrier.

As a secondary objective, the study will key on the identification of systems and components which, if deleted or deferred, would allow for substantial personnel reductions.

The unsolicited proposal was staffed at the Naval Material Command, approved, and funded. I was named the study program manager with an all-star team assembled. The hard-core engineering work was directed by Kenneth Brower, an insightful and versatile naval architect. A key consultant was Hebert Meier, recently retired as the senior naval architect at the Naval Sea Systems Command and probably the leading U.S. authority on carrier design. Aviation aspects of the study were directed by Charles Stalzer of BDM, a leading authority on aviation and weapons systems.

We worked hard over the next few months. We produced a highly readable, intuitive and analytical study.  However, despite our best efforts, we found that few major features could be delayed or deferred in constructing a large aircraft carrier. Some features, such as weapons stowage, could be changed or delayed, but no major efficiencies could be identified. The concept of an “envelope aircraft carrier” was not valid.

However, when we looked at engineering-related features (e.g., steam catapults), we became intrigued with the basic engineering plant—two pressurized nuclear reactors combined with four steam turbines turning four propeller shafts. At the time the Soviets were constructing the first of the four large, 28,000-ton “battle cruisers” of the Kirov class. These would be the largest surface combatants built from the keel up by any navy since World War II.

The Kirovs had a combination two-reactor/oil-burning steam plant. For several reasons the concept was attractive: The steam plant was efficient at providing high speed and the nuclear plant at providing endurance. Other benefits of such a “split plant” in a large aircraft carrier would be a reduction in nuclear-trained (expensive) personnel and a reduction in construction costs. Oil was relatively cheap at the time.

Thus, our report as submitted to Admiral Michaelis contained two parts: The basic envelope carrier study and a classified volume addressing the split-plant concept. We briefed the admiral and he reviewed the report. He felt that the envelope concept had been worth pursuing to demonstrate whether or not it could be feasible. As for the split plant, as a former skipper of the Enterprise, Michaelis thought that the idea was interesting. But, he pointed out, the idea would never “sell.” It would be fought by Admiral H.G. Rickover, the long-time and intractable head of the Navy’s nuclear propulsion program. Indeed, we were told to submit only three copies of our final report. And, we later learned, that all three copies of the second volume—examining the split-plant propulsion concept—were immediately destroyed.

Admiral Michaelis served as Chief of Naval Material until August 1978. We remained in contact and I did some additional work for him…but nothing as thought-provoking as the envelope aircraft carrier.