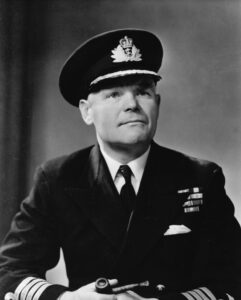 (Editor’s note: This is the ninth in a series of blogs by Norman Polmar, author, analyst, and consultant specializing in the naval, aviation, and intelligence fields. Follow the full series here.)

One of the most interesting, intelligent, and professional persons whom I have had the privilege of knowing was Captain Donald Macintyre, Royal Navy. The son of Major-General Donald Macintyre, CB, Indian Army, the younger Macintyre joined the Royal Navy at age 14

After serving in surface ships and attending the RN College Greenwich, Macintyre underwent flight training and served in the Fleet Air Arm until 1933. He loved flying and flew from carriers on the China Station and in Home waters. He was “invalided” out of flying after contracting shingles (herpes zoster) in 1933.

Thus, forced to return to surface ships, when war erupted in Europe in September 1939, Macintyre was commanding the destroyer Venomous. He commanded a succession of destroyers, and early in the European War participated in the Norwegian campaign as well as in anti-submarine operations.

Macintyre took command of the destroyer Walker and the 5th Escort Group in March 1941. In his first convoy escort operation the destroyer Vanoc of his group sank the U-100 commanded by Joachim Schepke and his own ship sank the U-99 commanded by Otto Kretschmer. They were Germany’s top-ranking German submarine aces; Schepke was killed and Kretschmer was captured.

Promoted to commander in 1942, Macintyre served briefly as the British liaison officer at the U.S. naval base in Argentia, Newfoundland. He returned to sea in the destroyer Hesperus in command of the B.2 Escort Group in 1942-1944. That  ship fought one of the most dramatic duels of the war on the night of 11-12 May 1942: The U-223 was forced to surface by the Hesperus‘ depth charges. The U-boat fired five torpedoes at her antagonist but missed the destroyer. The destroyer released additional depth charges, fired on the submarine, and then rammed her. Although, the badly damaged U-223 was able to escape. Under his command the Walker and Hesperus sank five U-boats; his escort groups sank additional U-boats during his command.

At one of our later meetings, when I pointed out to Macintyre that one U.S. escort ship, the USS England (DE 635), had sunk six enemy submarines in 12 days, he immediately responded: “But, Norman, those were Japanese submarines!”

In 1944, after his frigate was sunk by a U-boat torpedo, Macintyre was able to requalify as a pilot and returned to his beloved Fleet Air Arm. Macintyre had commanded two of the most effective escort groups in the Battle of the Atlantic (the other was commanded by F.J. Walker, who died in July 1944 of a stroke caused by exhaustion).

When we first met in London in the early 1960s, Macintyre had just completed his excellent history of the Fleet Air Arm—Wings of Neptune (1964). We were introduced by a mutual friend at the Royal Navy historical branch in London, spoke for a while, and became friends. He was overwhelmingly generous with his time and knowledge in assisting me with my book Aircraft Carriers: A History of Carrier Aviation and Its Influence on World Events (1969).

Macintyre wrote more than a dozen books of naval history plus several monographs on naval subjects. On at least one occasion he told a colleague at the naval historical branch that he had to maintain such a prodigious literary output to keep his wife—always a sharp dresser—in fur coats.

I was able to assist him with U.S. material for several of his projects, and was a participant in his classic work Man-of-War: A History of the Combat Vessel (1968), for which Captain Edward (Ned) Beach, USN, wrote the preface. My favorite of all of his books was the autobiographic U-boat Killer (1956), that gives detailed and exciting descriptions of service and action in destroyers and frigates in the Battle of the Atlantic. Macintyre’s book rivals Nicholas Monsarrat’s 1951 novel The Cruel Sea for grasping the reader’s attention. Both books must be read—and the film Cruel Sea watched—by anyone attempting to comprehend the Battle of the Atlantic, the longest and, in several respects, most critical campaign of World War II.

But Macintyre always was self-effacing about his literary efforts: About his book The Privateers (1975), he commented to me, “Let’s hope the final result will not bore the reader as much as the writing has me!” Macintyre also wrote articles for several magazines, including the U.S. Naval Institute Proceedings.

He and I corresponded frequently between my regular visits to London. When I was in London he would graciously host me for lunch at his club. And, on a couple of occasions, when my wife, Beverly, was with me, he and his wife, Monica, would entertain us at their home, Little Chart in Ashford (Kent). She, too, was a delightful personality…and smoked tiny cigars.

At lunch in Macintyre’s club one day, as we finished and the waiter inquired about coffee, I said that I preferred tea. Ha! I quickly learned that London’s top restaurants and private clubs never served tea with lunch. We adjourned to the lounge, where Macintyre ordered coffee and asked the waiter to fetch one of the housekeepers whom he knew. When she appeared—in starched white cap and apron over her black costume—Macintyre presented her with a shilling and said something along the lines of, “I know that you ladies keep a kettle on the boil in your cupboard. Could you please fix my young American friend with a cup of tea….” I had my tea!

Our many letters were filled with “business” as well as personal matters: 17 December 1970: “By the way, I am a grandpa since last September and very pleased with the design of the latest Donald Macintyre….” 15 October 1973: “We have had a most wonderful summer over here. Almost too dry by British standards and my garden was complaining loudly before the rains came during September. However, we have just harvested a fine crop of apples—lovely crisp Blenheim Oranges….”