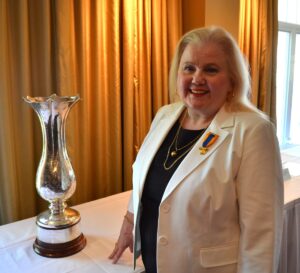 Rosalie Calhoun, outgoing President of the Society of Sponsors of the United States Navy, poses with the President’s Cup.

On Thursday, 2 May 2013, Naval Historical Foundation Executive Director Captain Todd Creekman, USN (Ret), his wife Debbie, and Digital Historian Dave Colamaria had the pleasure of attending the annual Society of Sponsors of the United States Navy luncheon. The event was held at the Westwood Country Club in Vienna. The featured speaker was former Undersecretary of the Navy the Honorable Robert Work, who spoke about the Navy’s current fiscal challenges, as well as the history of ship naming. During an earlier private business meeting, Dr. Barbara Pilling was elected President of the Society of Sponsors for 2013-2015. Dr. Pilling, an NHF Board member, has been the guiding force behind our STEM-H Teacher Fellowship Program. We congratulate her on this new position! We also want to congratulate outgoing President Rosalie Calhoun, who completed a very successful (and very busy) term of office.

On display at the luncheon was the striking Society of Sponsors President’s Cup, which features the names of each of the Society’s Presidents since 1908. The sterling silver cup was produced in the early 1900s by Washington, DC’s oldest business, Galt & Bro. Jewelers which was established in 1802 by James Galt. During the period the cup was designed and produced, Edith Galt became manager of the firm in 1908 following her husband’s death, and married President Woodrow Wilson in 1915. The business closed in 2001 after nearly two centuries of continuous operation; it’s final year in operation was reportedly its most profitable. The Cup is normally on display in the Navy Museum at the Washington Navy Yard, under the terms of a special arrangement with the Society. NHF assists the Society by receiving the Cup on temporary loan from the Museum for updating the engraved President’s listing and display at the luncheon. In addition, NHF hosts and maintains the Society’s website, which you can visit at: societyofsponsorsofusn.org/.

The Naval Historical Foundation has a long standing relationship with the Society of Sponsors, dating back to the early 20th century. For those who aren’t familiar with the Society, it is composed of the select group of women who have been chosen over the years by the Secretary of the Navy to sponsor a U.S. Navy warship. The most recognizable function of a Sponsor is to break the bottle of champagne on the bow of her ship at a christening ceremony, but the role of a Sponsor extends far beyond that, as detailed here on the Society’s website.

NHF was founded in 1926, but the Society predates us nearly 20 years, with a founding date of 1908. Over the years our partnership has grown, and NHF attendance at the annual luncheons has been a regular occurrence. Recently we uncovered a fascinating document in our archives: a speech delivered by Commodore Dudley Knox (standing in for NHF President Fleet Admiral Ernest King, who was unable to attend) at the 1947 Society luncheon. We’ve scanned that speech, and you can download a copy here. Knox closed the speech by stating that “your objectives are akin to ours. You perpetuate naval history and tradition in an inspiring way that helps to build and keep alive naval morale. The service counts you among its best friends–friends of the spirit–the spirit of our Navy and our country.” More than 60 years later, those words continue to ring true. 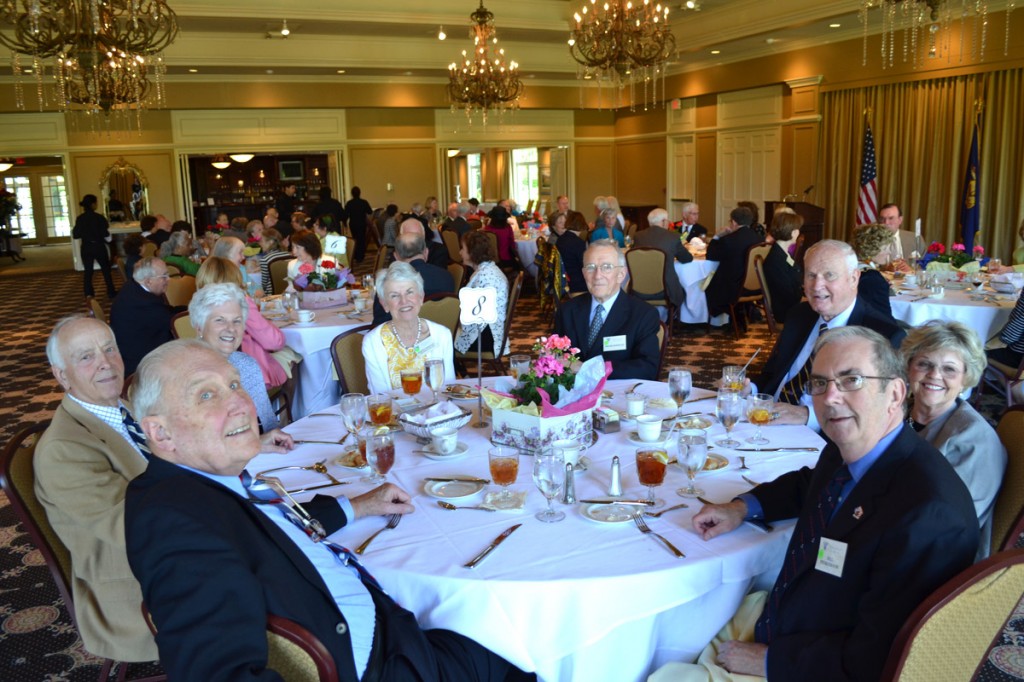