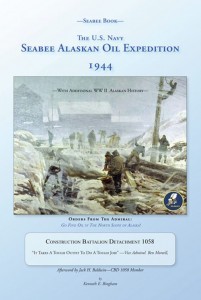 The author has divided this book into six sections. Over half of the book is a reprint of Construction Battalion Detachment 1058’s cruise book covering its tour of duty at Barrow, Alaska, during 1944-1945. The author provides a 5-page introduction into the Navy’s decision in 1944 to explore Naval Petroleum Reserve Number Four. This reserve covered 35,000 square miles at Barrow, the most northern tip of Alaska. The 183 pages following the book’s introduction is a direct reprint of the 1945 cruise book.

The reprinted 1945 cruise book is a fascinating read and contains a wealth of photos. However, as a cruise book written 65 years ago, it presents a number of problems for today’s reader. The book is written by some of those involved in the work of Detachment 1058 for the enjoyment of the fellow members of the Detachment. Thus, the authors use of the cruise book presume that the reader understands various events that are mentioned or photos published thereof.

The 1945 cruise book is divided into sections that discuss components of the Detachment: camp building and maintenance, heavy equipment, shop, sled train operations, commissary, disbursing, laundry, engineering, personnel, medical, chaplain, recreation, and others. Each of these sections contains a written introduction short on hard facts but heavy on listing members of that component. The story of the exploratory oil well they drill takes up but two sentences within the cruise book. Each of these sections is supported by a great selection of photos but all too often lacking captions.

Typical of the frustration a reader encounters in the cruise book reprint is that the book contains a photo of Joseph W. Wallen with the heading “In Memoriam.” This is followed by a paragraph saying that Joe was a good worker and would be missed. There is also a photo of a grave with a cross on it. I assume the grave is Wallen’s but nowhere in the book is there any mention of how he died. I assume this is because the book’s intended readers knew Wallen’s story.

The next section of the book covers Seabee activity elsewhere in Alaska. This section is a summarization of information found in the book Building Naval Bases in World War II. Naval bases covered in this section are Sitka, Kodiak, Dutch Harbor, Adak, Attu, and Kiska. The text is concise, and the accompanying photos show some of the projects covered in the text. The final section of the book is a photo and textual summary of Alaska in World War II, the construction of the ALCAN Highway, and the formation of the Alaskan Scouts.

Overall, the book is well laid out, and the photo reproduction is quite good. The book is a nice introduction to Seabee operations in Alaska during WWII. I hope that someone will someday flesh out the story of Detachment 1058 beyond that found in this cruise book.

Charles H. Bogart from Frankfort Kentucky is a frequent contributor to Naval History Book Reviews and was named a 2011 Volunteer of the Year.