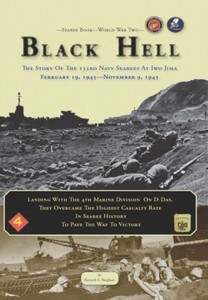 The book was written to justify why a Presidential Unit Citation (PUC) should have been awarded to the 133rd NCB. The basis of the claim by the survivors of the 133rd NCB is that they came ashore in the first assault wave at Iwo Jima. Not only did they offload supplies reaching the beachhead but provided armed, BAR and .30 caliber machine gun, beach security teams that engaged the Japanese. The survivors of the 133rd NCB thus contend that since all other first wave units received a PUC, they should also have received that award. The 133rd NCB survivors association has submitted their claim three times over the past decade for a PUC to the Department of Defense (DoD). Each time they were denied. DoD’s position is that too much time has passed, and they will not second-guess why the 133rd NCB was not nominated for the award in 1945.

The author starts his book by giving an excellent summary of the assault upon and the capture of Iwo Jima using both Japanese and American sources. He follows this with an account of how and why the Navy formed Construction Battalions, Seabees. The reader is then treated to a section from the 133rd NCB cruise book covering the unit’s formation to movement to the Pacific and its landing on Iwo Jima. The 133rd NCB came ashore at Iwo Jima over three beaches, Yellow 1, Yellow 2, and Blue 1. Troop strength was 23 officers and 767 men. Overall, the 133rd NCB suffered 25 percent casualties at Iwo: 40 killed in action, 156 wounded, 2 missing, and 48 evacuated for sickness.

The heart of the book is a recounting by various members of the 133rd NCB concerning what they saw on Iwo Jima. As might be expected, some of these accounts contain more information than others; however, in total, they present a chilling and descriptive picture of the horror of Iwo Jima. One constant theme in these tales is about the randomness of death. There are numerous accounts of “I survived but these men who were alongside of me were killed.” This section is supported by a great number of photos of the 133rd NCB.

The book closes with brief histories of other Seabee units that served on Iwo Jima: 8th, 31st, 62nd, 70th, 90th, 95th, 106th, and 301st NCB, 8th Construction Regiment, and 23rd Special Battalion. The coverage of these units is uneven due to lack of detailed reports on some of the units. Unit cruise books were used by the author to develop the story for all of these units except the 106th NCB and the 23rd Special Battalion.

This book is an excellent read for anyone interested in the Seabees, the Iwo Jima campaign, or developing the beachhead during an amphibious operation. The photo reproduction in the book is very good considering that most were copied from printed publications. It is obvious from this book that there is a need for an official history of the Seabees on Iwo Jima that covers the story of the Seabees from the planning of the assault until they were withdrawn from the island.