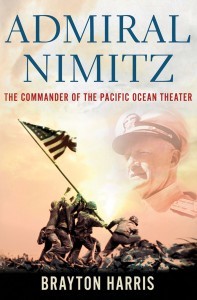 Brayton Harris begins his narrative by pledging to give the reader a “guided tour” of Fleet Admiral Chester W. Nimitz’s life.  Harris delivers on this promise, tracing Nimitz’s rise from a small-town Texas boyhood to the apex of naval high command. U.S. Naval Institute oral histories inform Harris’ research, as do contemporary news stories and an array of secondary sources-most notably E.B Potter’s monumental biography of the admiral: Nimitz, published in 1976. Compared to Potter’s earlier work, Admiral Nimitz: The Commander of the Pacific Ocean Theater provides a tidy, straightforward account-in a volume considerably slimmer than its predecessor.

Harris zeroes in on Nimitz’s development as a naval leader and strategist. His opening chapters describe young Chester’s rise up the navy career ladder, “one job at a time,” from his Texas boyhood through flag rank. The number and diversity of Nimitz’s early assignments may seem unusual to modern naval officers accustomed to comparatively rigid career paths, but they reflect a service in the midst of tremendous social and technological ferment. During the two decades following his 1905 commissioning at Annapolis, Nimitz served much of his sea time in platforms which embodied unproven new technologies: destroyers, submarines, and combat logistics ships. These pioneering opportunities allowed Nimitz to establish himself as a gifted commander, innovative problem-solver and skilled strategist. It was also an environment conducive to educated risk-taking, and somewhat tolerant of honest mistakes, as the young skipper Ensign Nimitz discovered after he ran his destroyer aground in the Philippines-a mishap that did not end his career.

As one might expect from its title, over half of the book covers Nimitz’s Pacific War experiences. Within these 12 chapters, the author fathoms the underpinnings of his subject’s successful wartime leadership. Through a series of anecdotal recollections, Harris reveals a distinctive “Nimitz style,” hallmarked by the admiral’s thoughtful selection and handling of subordinate commanders, key members of his staff, and other senior leaders. Nimitz energetically cultivated a strong rapport with the fighting forces under his cognizance, whether through his frequent travels to frontline areas, or conversations with operational commanders at fleet headquarters. He was a patient listener, maintaining his door open to nearly all comers, including junior personnel. One of Nimitz’s greatest strengths was his capacity to size up individuals and match their abilities to appropriate responsibilities. He readily discerned competence and confidence from ineffectiveness and defeatism, then acted quickly to eliminate the latter-as in the autumn of 1942, when Nimitz replaced a pessimistic senior commander in the South Pacific with the aggressive William F. “Bull” Halsey. Always Nimitz acted with discretion, exercising his personal code of public praise and private reproof.

Two aspects of Nimitz’s career as Pacific commander receive special focus in the book: his relationship with the press, and his interactions with the U.S. military top brass, most notably General Douglas MacArthur and Admiral Earnest J. King. For much of the war, Nimitz suffered a continuous barrage of complaints from journalists, who never seemed satisfied with the timeliness or depth of information provided by the fleet staff. He finally hit upon a solution in 1944, when he assigned Captain Harold “Min” Miller to serve as fleet public relations officer. Innovative, accessible and popular with reporters, the future Chief of Navy Information (CHINFO) Miller did much to repair relations with the press corps and to deliver the navy’s story to the American public.

Nimitz rarely aired his dislike for MacArthur. Indeed, Harris shows that Nimitz cooperated and at times deferred to the flamboyant general, as long as MacArthur’s strategies appeared practicable-and did not undermine the navy’s Central Pacific offensive. King’s demeanor was often equal in petulance to that of MacArthur, and Nimitz’s relationship with his superior suffered extra disadvantage early in the war, when he did not enjoy the King’s full confidence (Nimitz was FDR’s choice for Pacific commander, not King’s). However, Nimitz earned King’s trust quickly by exercising excellent strategic judgment at Midway and in the Solomons, and the two forged a solid working relationship that lasted for the duration. In the end, King helped persuade a hesitant Truman administration to appoint Nimitz as the first postwar CNO, a position the latter longed for as a crowning achievement to his career.

Admiral Nimitz: The Commander of the Pacific Ocean Theater offers a quick and informative read that introduces the reader to one of the U.S. Navy’s leading personalities of the twentieth century. Students of naval history will enjoy the book. In addition, I recommend it with enthusiasm to junior officers and enlisted sailors seeking relevant insights on navy career dynamics, leadership style, inter-service relations, and strategy. Short chapter lengths (5-6 pages) divide the content into bite-size portions of reading, well-fitted to busy shipboard operations.

Working toward his Ph.D. at the University of Wisconsin, Captain Mobley plans to trace the Navy’s internal struggles from 1865 to 1945 – between the advocates of technical specialization, the champions of a broad, strategic outlook, and others. He will argue that the tensions emanating from this internal struggle transformed the Navy’s intellectual and institutional paradigms.