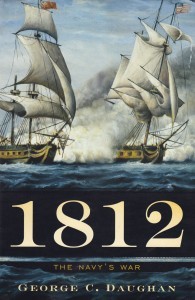 This is a splendid history. While documenting the courage, skill and luck of the tiny American Navy, Professor Daughan describes the machinations of the then principle players on a world stage in vastly greater breadth and detail than is usually thought about or studied in the United States. For example, the major role that Napoleon’s invasion of Russia played in influencing the British government’s policy related to the United States is described in detail. Manifest throughout the book is the ignorance and self-deception of all the governments in judging the motivations of their enemy. Among other positions that echo in today’s world was a Congress that borrowed rather than tax to fund the war, enriching the bankers who opposed the war but loaned the money at high rates of interest.

As far as the exploits of the American Navy, these are fully detailed but Professor Daughan explains their effects on the war as a whole, not just individual battles. All the regular stories are here in full: the Constitution under three different skippers, the plucky sloops of war that universally outfought their heavier opponents in single ship combat, the ship-building races on Lakes Erie and Ontario.

But the depth of focus is well beyond the individual ship actions or the sideline issues of politics and personalities. Commodore John Rodgers’ cruise in 1812 is an example. Rodgers squadron included most of the Navy’s warships that were ready for sea at the start of the war, including two of the three heavy frigates, President and United States. Setting a course to intercept the Jamaica convoy in which over a hundred merchantmen sailed from the Caribbean to England each June and July, the Americans missed the convoy as it slipped by in heavy fog. Disgusted, his second in command, Stephen Decatur, labeled this voyage as a failure – and it was generally considered so in earlier histories. But Professor Daughan differs: he believes the voyage was a strategic success. The concentration forced the Royal Navy’s Halifax Squadron to keep together in chase instead of being able to spread out to blockade the American ports. So in the first few weeks after the declaration of war, dozens of American merchantmen were able to return unhindered to ports along the East Coast – many later to be converted to privateers.

Of interest to all officers are the portrayals of the unreserved egotism and over preening pride of many individual officers and the resulting jealousies and failures those characteristics created. In the case of Lawrence, it cost the loss of Chesapeake. For Decatur and Bainbridge these characteristics set up the fateful duel that ended the life of one and the career of the other. While trumpeting of these and other officers’ efforts in establishing the heritage of daring, heroism and skill for the Navy, today’s Navy should be grateful that these less desirable personality traits have been ameliorated as serious features of its officer corps.

Among the most interesting insights is Professor Daughan’s judgment on the effect of the American invasion attempts in Canada; all ultimately defeated. Demanded by enthusiastic War Hawks unencumbered by knowledge or experience who predicted that the Canadians would flock to U.S. banners, these incursions became the groundwork for a unified Canada. While British regular troops were key in defense, Canadians as part of the regular army and as militia became important in the defeat of the American attempts. In so doing the idea and the spirit of a Canadian nation was created. Using this gauge, the War of 1812 deserves to be more celebrated by our northern neighbor than in the United States.

This reviewer’s first study about this war was Teddy Roosevelt’s iconic “War of 1812” which I read in 1949. Several more have enlightened my mind and graced my library since. Without question however, this history of that period is the best there is. Anyone interested in the period or in the early traditions of the United States Navy should read this book. Anyone serious about these things should own a copy.

Rear Admiral Holland is the Vice President of the Naval Historical Foundation and Editor-in-Chief of the Foundation’s book, “The Navy.”