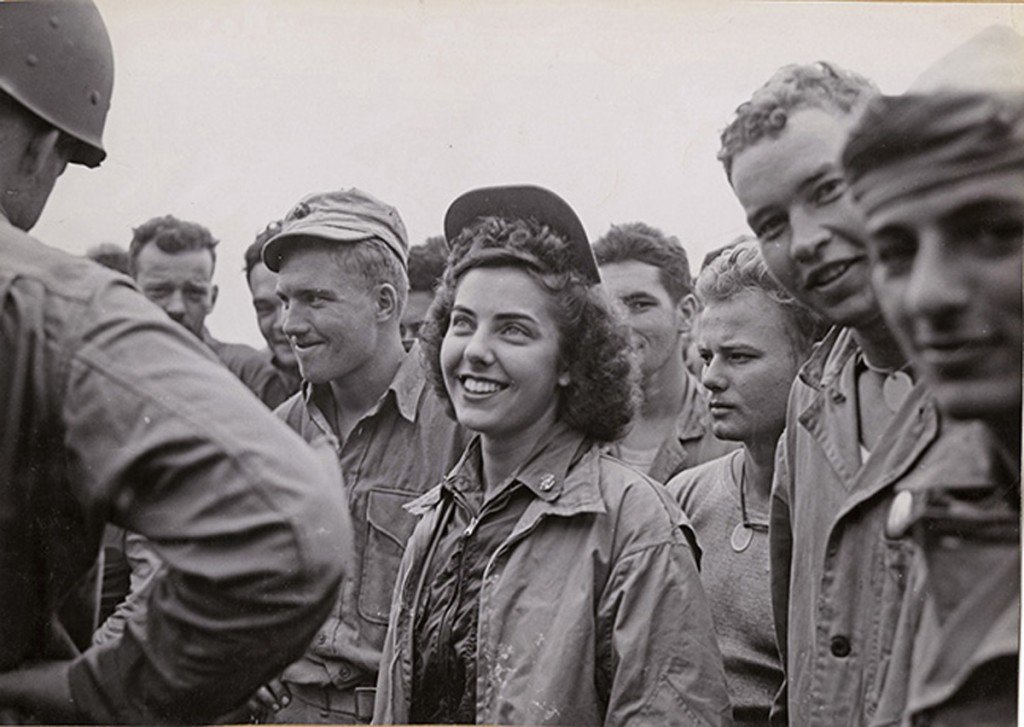 When the Naval Air Transport Service (NATS) R4D broke through the clouds of volcanic dust and smoke to land on Iwo Jima on March 6, 1945, it carried more than whole blood and medical supplies for the wounded.

On board this flight was a 22-year old Navy nurse named Jane Kendeigh [1. After her heroic work in Iwo Jima, ENS Jane Kendeigh (1922-1987) was sent back to the United States to participate in a War Bond drive. Soon after, she requested to return to the Pacific combat zone. On 7 April 1945, six days after the invasion, Kendeigh landed on Okinawa.], marking the first time in history that a Navy flight nurse appeared on an active Pacific battlefield. Kendeigh may have become a symbol for casualty evacuation and high altitude nursing on that day, but she was far from alone in this daring mission.

From 6 to 21 March 1945, Kendeigh and her fellow flight nurses air evacuated some 2,393 [2. This amounted to 13.5 percent of total casualties evacuated on Iwo Jima. (BUMED. The History of the Medical Department of the United States Navy in World War II.Volume 1: A Narrative and Pictorial Volume. Washington, DC: Government Printing Office. 1953.)] Marines and Sailors from Iwo Jima.  Pictures of these first combat nurses show them offering encouragement and comfort to the rows of littered patients along the battlefield runways. For these physically and psychologically wounded warfighters, flight nurses served as the military equivalent of Dante’s Beatrice [3. In the allegorical poem The Divine Comedy, Beatrice is a symbol of hope who guides the author/protagonist through purgatory and hell to heaven.], appearing at a critical moment in their lives and escorting them from the pits of hell to the safety of forward operating hospitals. It’s little wonder why a special bond often developed between these patients and nurses.

In a recent telephone interview, Mary Hudnall, one of the first flight nurses on Iwo, recalled one patient being so grateful of his rescue that he insisted on giving her a memento from the battlefield. “He asked me to take a small medicine bottle and said ‘It’s sand from Iwo Jima. I don’t want you to forget what we did here.’” When he fell asleep she tucked the trinket under his blanket.  However, when he awoke he begged her to take it. As of April 2013, Hudnall still had this souvenir and still remembered the sacrifice of the men on Iwo. [4. Sobocinski, André. Oral History Interview with Mary Leahy Hudnall (telephone) on 25 April 2013.]

By the time of the invasion of Iwo Jima, the concept of air evacuation was nothing new.[5. The British had experimented in “air ambulancing” as far back as in the 1920s.  In 1929, the Colonial Flying Service and Scully Walton Ambulance Company of New York organized the first civilian air ambulance service. Kane, Joseph.  (Famous First Facts: A Record of First Happenings, Discoveries and Inventions in the United States. New York: The H.W. Wilson Company (Third Edition). 1964).] On 1 September 1942, the joint-service South Pacific Combat Air Transport Command (SCAT) began using cargo planes to evacuate wounded servicemen during the Guadalcanal campaign. These missions were initially free of medical personnel until November 1942, when Navy pharmacists mates were added to flights.[6. BUMED. The History of the Medical Department of the United States Navy in World War II. Volume 1: A Narrative and Pictorial Volume. Washington, DC: Government Printing Office. 1953.] 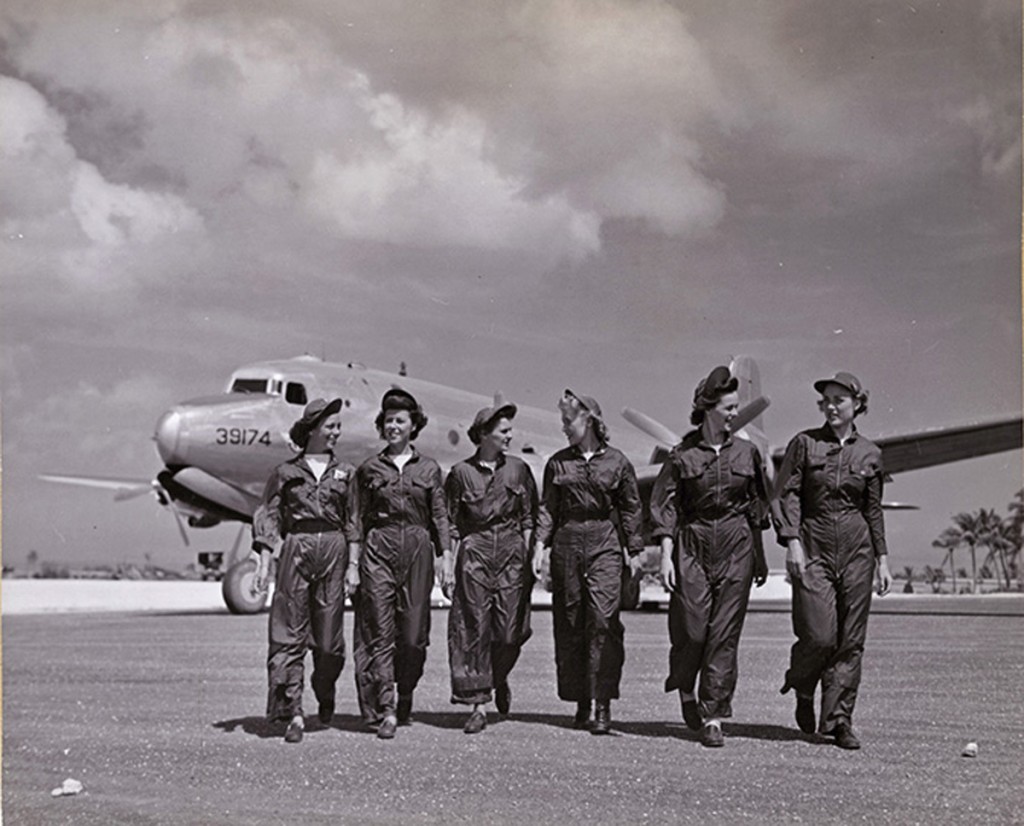 Owing to the need for flight nurses in the Pacific war, the Navy established its own School of Air Evacuation Casualties at Naval Air Station Alameda, CA in 1944. Overseeing the school was a former United Airline stewardess and registered nurse named Mary Ellen O’Connor, later dubbed the most “flyingest woman in the world” for her long career aboard airplane. [8. Mary O’Connor was a nurse turned stewardess at United Air Lines, at a time when stewardess were required to be registered nurses. At the time of her entry into the U.S. Navy she had already flown 2,500,000 miles. After the war, she returned to United Air Lines where she become the namesake for their Convair 340, also known as the “O’Connor Mainliner.” In 1961, she published her biography Flying: The Story of a Pioneer Stewardess (New York: Rand McNally).  ] On 10 December 1944, the first class, consisting of 24 Navy nurses and 24 pharmacists mates,[9. Applicants to the Navy Air Evacuation School in Alameda, CA, were required to have good character references and be excellent swimmers.] commenced.

The eight-week course consisted of lectures and demonstrations on survival training, air evacuation techniques, physiology of flight, first aid with emphasis on shock, splinting/redressing wounds, and treatment of patients in non-pressurized cabins. Students also learned about artificial horizons, and altitude through flight simulation exercises.  Hallmark in the course was the intensive 18-hour “watermanship” training organized to simulate conditions of a water landing/crash scenario. The prospective flight nurses were required to swim under water, swim one-mile, and be able to tow victims 440 yards in 10 minutes [10. Stuart, Paul. Angels of Mercy: U.S. Navy Flight Nurses of the Pacific Theater. WWII Military Journal. Winter 1996. pp 27-30.].

Following graduation in January 1945, 12 of the first flight nurses were sent to Naval Air Station Agana, Guam, to prepare for their first battlefield mission while the others were used to transport casualties in the Continental United States and from the (Territory of) Hawaii. By the end of March, after two more classes graduated from the school, the Navy had 74 trained flight nurses in its employ; almost all would be used for the next big challenge, perhaps the biggest of them all: Okinawa.

The Battle of Okinawa alone accounted for 17 percent of the total Navy and Marine Corps casualties suffered in World War II.  Owing to the enormous casualty totals, Okinawa was the largest combat casualty evacuation operation in U.S. military history and marked the first time the Navy evacuated more casualties by air than sea. Unsung heroes in this campaign, the Navy flight nurses, now using larger R5D which could accommodate up to sixty patient litters, would help evacuate some 11,771 to Guam. [11. The Navy evacuated some 11,732 casualties by APA, LST, and hospital ship (versus 11,771 by air).  It could take a ship eight to ten days to transport casualty from Okinawa to Guam versus a flight which could take about 8 hours).   BUMED. The History of the Medical Department of the United States Navy in World War II. Volume 3: The Statistics of Diseases and Injuries. Washington, DC: Government Printing Office. 1953.].

After Okinawa, many of the flight nurses were used to repatriate Prisoners of War from the Philippines to Guam. A few who stayed in service years after the war would participate in the Berlin Airlift.

Owing to a longstanding ban on marriage that was renewed after the war, the choice of service and family was not possible for flight nurses and most left the Navy.[12. Marriage lead to immediate dismissal for all women servicemembers in the war.  This ban was briefly beginning in January but reinstituted in November 1945.  It was not until the 1960s that female Navy nurses were finally allowed to marry and stay in service.]

Today, the story of the brave women of Iwo Jima and Okinawa remains a footnote in most histories of military nursing; they never achieved any medals for their service let alone much notoriety. Then again, most would say that they were just happy doing their jobs.

As ENS Jane Kendeigh would remark about her service:  “our rewards are wan smiles, a slow nod of appreciation, a gesture, a word—accolades greater, more heart-warming than any medal.” [13. Sutter, Janet. “’Angel of Mercy’ kept wings: WWII nurse still dotes on patients. The San Diego Union. Sunday, March 24, 1985.] 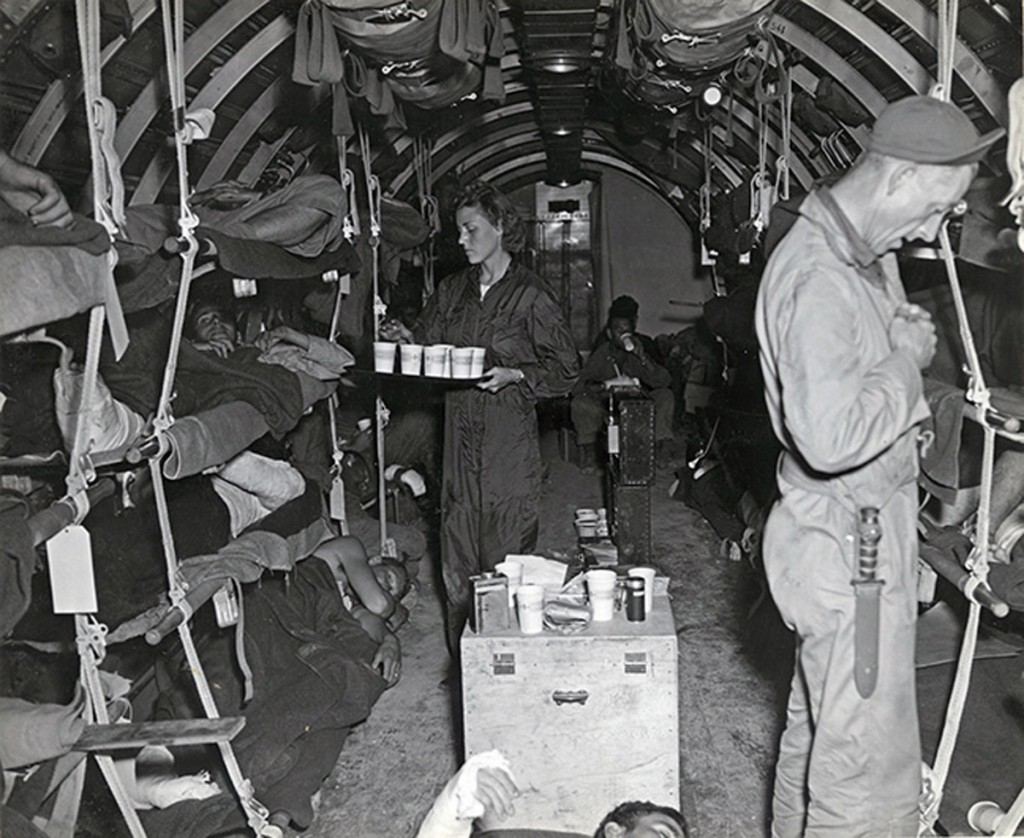