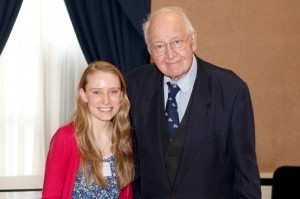 Ambassador J. William Middendorf II has been a member of the Naval Historical Foundation’s Board of Directors longer than any other director—nearly 40 years—and has consistently donated his time, his talents and his funds to support our mission to preserve and honor the legacy of those who came before us, and to educate and inspire the generations who will follow. In addition, Ambassador Middendorf, an accomplished composer, has a special affection for the U.S. Navy Band, dating from his service as Secretary of the Navy from 1974 to 1977. In recent years, he has generously supported the Navy Band and the culmination of one particular program resulted in a serendipitous event at the Washington Navy Yard last week. Ambassador Middendorf’s monetary gift, donated to the Navy by way of the Naval Historical Foundation, enabled the Navy Band to offer a significant prize to the “Ambassador Middendorf Young Artist” winner of the Navy Band High School Concerto Competition Concert.

On 10 May, the 2013 winner, Ms. Arianna Beyer, clarinetist and a senior at Douglas Anderson School of the Arts, Mount Dora, FL, arrived at the Navy Band’s “Sail Loft” rehearsal facility at the Washington Navy Yard to rehearse and perform with the Navy Band. She found Ambassador Middendorf, in town for a business meeting, on hand to congratulate her, her family and the other concerto competition entrants. Encouraging young musicians is one of the Navy Band’s education objectives and this annual competition provides an opportunity for talented young musicians from around the country to perform with the Navy Concert Band. Ms. Beyer, ecstatic at being able to meet Ambassador Middendorf as the culmination of her achievement, will be attending Eastman School of Music where she will major in music performance with a second major in pre-law from the University of Rochester.