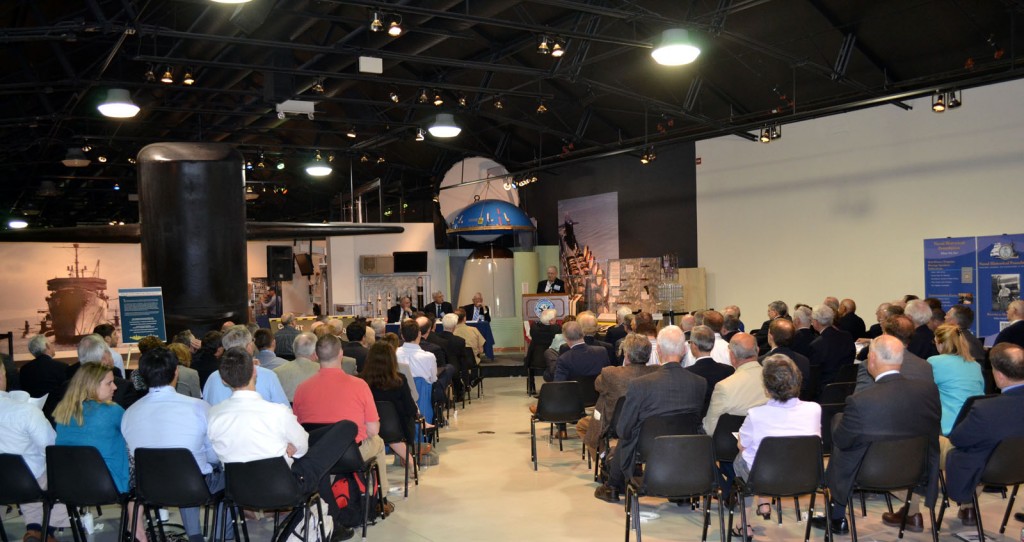 With the Covert Submarine Operations exhibit in the National Museum of the U.S. Navy’s Cold War Gallery serving as a backdrop, a large crowd filled the Gallery’s North Hall on the evening of 11 April 2013 (coinciding with the Submarine Force’s 113th Birthday) to witness and participate in a program titled “Seawolf and The Maritime Strategy: Examining the Relationships of Policy, Strategy, Technology, Tactics and Acquisition.“

In what has become a fixture on the April calendar for over a decade, the joint Naval Submarine League – Naval Historical Foundation Submarine History Seminar reviewed how the U.S. Navy’s posture changed from the Carter years of being a reactionary one that assumed the Soviet Navy would replay the role of the Germans in fighting a Battle of the Atlantic III, to a proactive strategy during the Reagan years that aimed at attacking Soviet ballistic missile submarines at the onset of war. A key was a realization by American Navy leaders that the Soviets had little interest in using their submarine forces to interdict allied operations in the North Atlantic. This shift in American thinking on how to employ forces in a general war with the Soviet Union became known as “The Maritime Strategy” and the Seawolf submarine, of which only three were built, was designed as a big, fast, quiet, torpedo-laden weapon system that could effectively operate in hostile waters.

The participants were asked to address some of the following questions:

To address the questions,  three distinguished individuals assembled to discuss the design of Seawolf and the evolving thought process that led to the Maritime Strategy.

Over a series of three 20 minute talks followed by a lively discussion with a most engaged audience, the questions posed to the three panelists by the moderator were addressed. Rear Admiral Firebaugh acknowledged that the Maritime Strategy was a bit above his pay-grade and his focus was to design and build a submarine to meet specifications that were originally initiated by Admiral Hyman G. Rickover. In looking at the specifications to build an underwater platform that would deploy with an expectation that weapon reloads may not be feasible, it was clear how Seawolf was meant to be employed.

In contrast, Captain Swartz  provided a grander vision of some 21 factors that enabled the Maritime Strategy to become reality ranging from a change of administrations, the availability of funding, the educational pedigree of the officers assigned to the CNO and SECNAV staffs, an understanding of Soviet Navy wartime intentions, the entry into the fleet of ships, aircraft and weapon systems that proved to be very capable, the rise in ranks of fleet commanders who embraced an offensive posture, and advances in technology as exhibited by advances in computers and other electronic systems. Swartz also addressed how The Maritime Strategy was embraced within the Defense establishment. He noted that in an era of Goldwater – Nichols legislation that called for the services to work together in joint harmony, The Maritime Strategy was very joint. However, the other services did not quite view it that way.

Finally Ambassador Brooks took on the broader implications of The Maritime Strategy with the concept that at the onset of Soviet tanks rolling into West Germany, the U.S. Navy would take an offensive posture on the northern flank and go after Soviet strategic assets. This strategy challenged the notion that attacking Soviet missile submarines was the last thing you would want to attempt, as it might trigger the Soviets to fire their sea-based missiles against the United States.  Instead, Brooks highlighted a change in thinking that if Soviet leaders saw their sea-based strategic assets suddenly disappear, they might be less inclined to escalate the conflict to a nuclear level.

The Naval Historical Foundation is currently transcribing the proceedings of the seminar and will provide interested individuals copies for a small fee to cover the transcription, publish-by-demand costs, and shipping. To obtain a copy of the seminar proceedings, contact Dr. David F. Winkler at dwinkler@navyhistory.org.