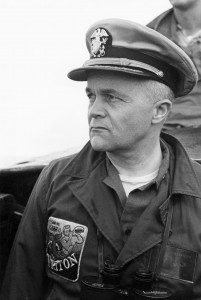 (Editor’s note: This is the sixth in a series of blogs by Norman Polmar, author, analyst, and consultant specializing in the naval, aviation, and intelligence fields. Follow the full series here.)

As mentioned in previous blogs, in the early 1960s I was befriended by then-Captain F.J. (Fritz) Harlfinger and then-Commander Dominic Paolucci. At the time they were the head and deputy head, respectively, of the submarine warfare branch in the Office of the Chief of Naval Operations.

They took the trouble to introduce me—a young journalist at the time—to most of the early skippers of nuclear-propelled submarines: Eugene P. Wilkinson, first C.O. of the pioneer Nautilus; William R. Anderson who commanded the Nautilus on history’s first trans-polar voyage; Richard B. Laning, first C.O. of the second A-sub, the Seawolf; James Calvert who commanded the Skate on her first two polar cruises; John H. Nicholson, who took the Sargo on her remarkable polar cruise; James B. Osborn, first skipper of the George Washington, the first Polaris submarine; Edward L. Beach, C.O. of the giant, two-reactor submarine Triton; and, indirectly, to B.F.P. Samborne, first C.O. of the Dreadnought, Britain’s first nuclear submarine. All helped me with my first book, Atomic Submarines (1963).

Subsequently, I developed a close relationship over the years with Dick Laning and Ned Beach. During the ensuing years both men helped me with subsequent books—especially the biography Rickover: Controversy and Genius that I wrote with Tom Allen—and several  articles. On (very) rare occasions I was able to help them with their research and writing projects.

Dick had served in aircraft carriers and submarines during World War II, receiving the Silver Star. After the war he commanded three diesel submarines, earned a master’s degree in biophysics, and, after nuclear power training, commanded the submarine Seawolf and, later, the Proteus, the first Polaris submarine tender.

Ned served in submarines throughout the war. He was executive officer to Commander George L. Street, who was awarded the Medal of Honor for the submarine Tirante’s first war patrol. Beach received the Navy Cross and two Silver Stars before taking command of a submarine as war in the Pacific was ending. After the war he commanded a new attack submarine; served as naval aide to General Omar Bradley, chairman of the Joint Chiefs of Staff; as naval aide to President Eisenhower; and commanded a fleet oiler before being given command of the USS Triton in 1959. At the time the Triton was the world’s largest submarine and under Beach’s command the submarine circumnavigated the world submerged.

Ned also was an award-winning novelist. His first book—Run Silent, Run Deep (1955)—quickly became a best-seller and a classic. The 1958 movie of the same name, starring Clark Gable and Burt Lancaster, was based on the novel. More books followed, including The Wreck of the Memphis (1966), about the cruiser that his father had commanded at the time of her loss.

We kept in contact. As late as the 1990s he provided considerable help for my book Cold War Submarines (2004), written in collaboration with K.J. Moore. During this period, Ned became an ardent supporter of the son of Rear Admiral Husband E. Kimmel in his efforts to have his father restored to four-star rank, which he held on a temporary basis as Commander-in-Chief U.S. Pacific Fleet (at Pearl Harbor) on 7 December 1941.

During the controversy over giving Kimmel, deceased, four-star rank, I was involved on the “other side.” In a couple of talks that I gave about the Pearl Harbor attack and in press interviews, I expressed my opinion that the fleet was unprepared when the Japanese struck Pearl Harbor and that the blame fell largely on Admiral Kimmel’s shoulders.

Ned and I “crossed swords” following his December 1991 article in the Naval Institute Proceedings that defended Admiral Kimmel. In the March 1992 issue, Tom Allen and I took strong issue with Ned’s views. Further in support of the Kimmel efforts, Beach wrote Scapegoats: A Defense of Kimmel and [General] Short at Pearl Harbor (1995). Air Force veteran and aviation historian John W. Lambert and I published the book Defenseless: Command Failure at Pearl Harbor in 2003.

Throughout this period, Ned and I kept up a lively correspondence and continued our cordial chats whenever we met. At a Naval Submarine League conference, I asked Ned to sign one of his books for me.  He responded in the affirmative, and then added, “It will cost you.” When I expressed my surprise, he explained that he wanted me to come over to his home in Georgetown (D.C.) and listen to him make a case for Kimmel. Then, if I was in agreement with views, I would write an article or editorial supporting Kimmel’s posthumous promotion.

I readily agreed. Some time  later, I sat down with Ned and listened intently to him speak for about two hours, discussing Admiral Kimmel, the Japanese surprise attack, and the subsequent investigations of  the disaster. I interrupted him only for clarification of specific points. When he finished, after we drank some more tea, I responded. I attempted to reply point-by- point to his logical and well-presented treatise. It was with great regret that I found that I was not convinced by Ned’s arguments in support of Kimmel. I still believed that the overwhelming burden of  blame for the lack of preparedness by the fleet at Pearl Harbor rested with Kimmel.*

Late that afternoon we parted, still friends. Keeping in contact with one another, in a note dated 10 January 2002,  Ned wrote: “I further appreciate your willingness to go into this rather vexing and no longer very important matter with me.” Our subsequent contracts were few. On 1 December 2002, Ned passed away.  He was a true hero, an officer and gentlemen, a scholar, an exceptional author, and—I am very proud to claim—a friend.

*Kimmel served as Commander-in-Chief U.S. Fleet and U.S. Pacific Fleet from February 1941 to December 1941 with the designated rank of full admiral. He reverted to his permanent rank of rear admiral upon being relieved of command ten days after the Japanese attack on Pearl Harbor.  Despite efforts of his family and friends, and several official reviews, he has not been promoted posthumously to full admiral.