One of the services that the Naval Historical Foundation has provided to civic groups around the nation is a cadre of speakers who have naval history expertise developed through the study of naval history, or as a participant in historic events. Since 2000, the NHF has deployed dozens of individuals to address audiences from Maine to Washington state on a variety of topics ranging from the centennial of naval aviation to the bicentennial of the War of 1812. At a reception to be held on the USS Midway Museum in San Diego on April 7, we plan to welcome the newest member of our Speakers Program, high school student William Whittenbury. 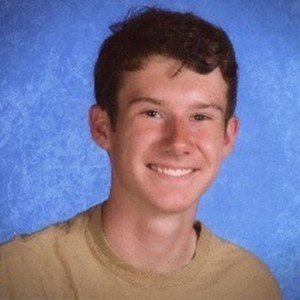 Hello! My name is William Whittenbury. I live in Rancho Palos Verdes, California, and attend Palos Verdes Peninsula High School. I live with my mom and dad and my amazing parakeet, Abraham.

I’ve been interested in naval history since before I can remember. However, my naval history interest began in earnest when I was about four years old.  During an elementary school trip to the library, I was captivated by a beautifully illustrated volume about the hunt for the Bismarck in 1941. I was enthralled by the majesty of the massive warships that plied their trade in frigid Atlantic waters, surging about with menacing grace. After reading that book, I became battleship-obsessed (I still am). My newfound interest was heartily supported by all members of my family, none more so than my great uncle, who served on the USS Intrepid in 1944. I got my hands on whatever reading material I could find, and began to look into other areas of naval history. I became fascinated with sea warfare in the age of sail after watching the 1951 film Captain Horatio Hornblower R.N., which presented thrilling Napoleonic-era naval battles. Of course, I was interested in what our navy had accomplished during that time period, and I was delighted to discover the exploits of the USS Constitution and other American ships during the War of 1812. I found it particularly gratifying that our forces were regarded as amateur and unsophisticated at the war’s beginning, but that our “handful of fir-built frigates with a bit of striped bunting” soon had the English press in despair. The United States was a true underdog in this war. Many underestimate the importance of the events of 1812-1814, but our country might not survive today if not for the heroism of brave volunteers that risked their lives against the most powerful naval force in the world. The War of 1812 truly was a second war of independence.

My battleship interest continues to this day. My interests generally gravitate toward the obscure, so it stands to reason that my favorite battleships…were never built. Due to naval disarmament treaties following World War I and the general shift of focus to aircraft carriers in World War II, a great number of magnificent ships were planned for various navies, but were never built. I decided to try to consolidate all of the information I could find about these ships, so at age 10 I began making a slideshow of images of these vessels. It now contains over 500 slides. I also enjoy making 1:1200 scale models of the ships of the “Fleet that Never Sailed.”

My first speaking engagement came two years ago. My eighth grade American History teacher asked for students to volunteer to give lectures on subject material, so I gladly volunteered to teach The War of 1812. I thoroughly enjoyed the presentation and managed to finish exactly one second before the bell rang.

I’m also the president of the Muskwa Club, an organization dedicated to providing enriching activities and service opportunities outside of school. To this end, we decided to create a speaker series, where members could give presentations to the community to share knowledge and enhance speaking skills. Entitled Muskwa Amplified, our first two events have been big successes this year. I gave a presentation entitled “The War of 1812: Celebrating the 200th Anniversary of the Rise of the US Navy” at Muskwa Amplified I, and spoke about “The Fleet that Never Sailed: Cancelled Battleships of WWII and the Difference they might have Made” at Muskwa Amplifed II this past January. In both presentations, I wove humor into the subject matter to make it more interesting to the audience, and I was surprised by their positive reactions. Per the audience’s requests, I’m working on another such presentation, which will cover the major sea battles from the Second World War.

Besides naval history, I also speak about the vaquita, the world’s most endangered marine mammal. The Muskwa Club conducts a major effort to raise awareness of this tiny, defenseless porpoise, which numbers just 190 as of last year. I’ve spoken to Los Serenos de Point Vicente, the Los Angeles Chapter of the American Cetacean Society, and five classes about the plight of this critically endangered creature.

My family has been amazingly supportive. Both of my parents valiantly sat through the 500-slide edition of the Cancelled Battleships presentation (thanks, guys!) and have given me so many opportunities to learn more. I owe them a huge thanks for putting up with me as I dragged them to countless maritime museums, all four Iowa class battleships (some of them more than once,) the Constitution, Massachusetts, and numerous other historical ships. They’ve come to appreciate naval history as well, and both gave exemplary service helping to set up the Muskwa speaker series.

In the future, I plan to become a history professor and to build a space colony at L-5, a point in space where the Moon’s gravity and that of the Earth counterbalance.