The Naval Historical Foundation recently acquired an 1878-vintage historical document, and generously donated it to the Naval History and Heritage Command’s rare book and document collection in the Navy Department Library. This document, a letter addressing the nineteenth century debate between staff officers and line officers, completes a pair, as the staff officer’s response to the letter is already in the collection. The acquisition of this document enhances the ability of naval historians to understand the thoughts and concerns of the officer corps during the post-Civil War period.

The age of steam introduced a new type of officer on board United States Navy ships, the boiler engineer. This officer, originally unschooled in the art of naval tactics (this would later change as the Naval Academy began to train its own engineers), was not eligible for command of ships. This arrangement was not unusual for the time. Other staff officers, such as surgeons and pursers, while having been granted assimilated rank in 1846 and 1847 respectively, did not serve in the line of command. That, however, did not make the engineer’s job insignificant. It was the engineer’s task to keep the ship moving and maneuvering in combat.

In the last half of the nineteenth century, the lack of coaling stations abroad meant that, for the U.S. Navy, fuel was in short supply. It was, therefore, common practice to cruise under sail and steam into battle. This, however, subverted the “normal” order of things.

Previously, when ships sailed under wind power alone, it was the captain’s job, as the most experienced officer aboard, to direct his ship through storm and doldrum, battle and diplomatic mission. The existence of the engineer, who controlled a ship’s ability to maneuver during engagements, limited the control of the line officers. As can easily be imagined, the latter did not enjoy the loss of control.

So, when the staff officers, specifically the engineering corps, sought to be assimilated into the regular officer corps, the line officers resisted. The document, newly acquired, details the line officers’ reasoning as to why the process of assimilation, already in progress (it took half a century), should proceed no further. This document, along with its mate, the staff officer response, already in the collection, constitute two historically significant documents leading up to the Naval Reform Act of 1899.

The newly acquired document is a letter, dated January 22, 1878, from the officers of the line of the US Navy, addressed to Secretary of the Navy Thompson, listing the officers’ concerns regarding the then-current state of naval affairs, specifically the ambiguities in the chain of command resulting from the granting of positive (normal officer) rank to the engineering corps in 1871. Hundreds of line officers signed this letter, including then-Commanders George Dewey and Alfred Thayer Mahan and Ensign Bradley Fiske!. The line officers maintained that, having received positive rank equivalent to line officers, the staff officers were no longer considering themselves subordinate to the executive officers of ships (second in the line of command), when the staff rank was superior to the executive officer rank. This, the line officers said, led to a “deterioration of discipline.” The line officers, therefore, sought new military regulations that would strengthen the authority of the executive officer to carry out the policies of the commanding officer. 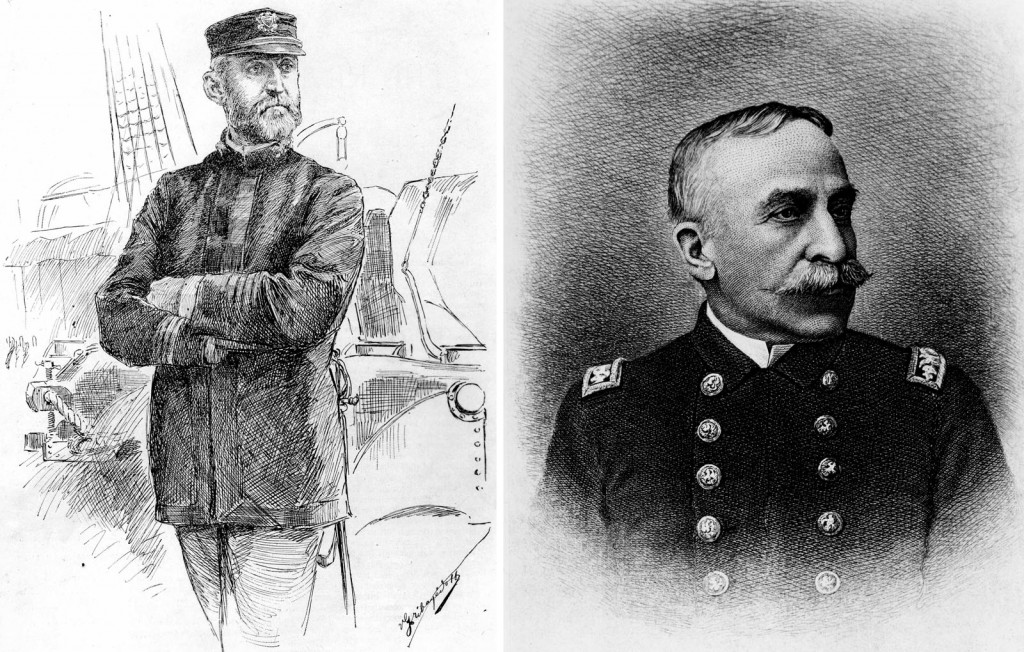 The staff officers of the engineering corps took offense at this assertion. They responded in an unsigned, undated, paragraph by paragraph, published rebuttal; each claim rebuked, each fear assuaged. The most significant of these was the assertion that the staff officers made no claim to being superior to the executive officer, only superior to those of lesser rank, all serving at the pleasure of the commanding officer.

This issue continued to fester for several more decades, compounded by a bloated officer corps in the wake of the downsizing of the US Navy fleet following the Civil War, –until the passage of the Naval Reform Act of 1899. That act, whose first line stated its goal was “to increase the efficiency of the personnel of the Navy…”, addressed the issue by folding the engineering corps into the chain of command, thereby completing the process of assimilation. This compromise, which both addressed the line officer’s desire to clarify the chain of command and the engineer’s desire to be treated the same as any other ranking officer, seemed to resolve the issue, ending a period of resentment between the various officer communities dating back to before the Civil War. While this may seem simple and logical to the modern mind, at the time it was a radical move. To this day other navies, such as the Royal Navy, still maintain separate engineering officer corps with no shared command responsibility. Nor did this necessarily relax the line officer’s antipathy towards engineering. As late as the First World War Admiral Samuel Robison advised Lieutenant Commander Chester Nimitz to redirect his energies from engineering and technology to leading and organizing men. This, however, is understandable as Robison was one of the old sailors from a time of the unassimilated corps.

In the post-World War II, Cold War era, the increasing complexity of the engineering plants aboard Navy ships, and repeated, high-visibility failures of ships to meet operational requirements because of engineering failures, led the Navy to require prospective commanding officers to complete engineering officer of the watch qualifications before they could be considered qualified for command. Furthermore, once ordered to command, those prospective COs were further required to attend the nuclear navy-inspired “Senior Officer Ship Material Readiness Course, or “SOSMRC” before assuming command. The engineer officers of the 1890s would surely have enjoyed the spectacle of their line officer comrades lighting fires under boilers, sounding fuel tanks, checking lubrication levels and performing the myriad tasks inherent in running a power plant. In a sense, their assimilation into the line officer community was now matched by the line officers’ assimilation into the engineering community!

If you are interested in reading the letter that first articulated this dispute, you can download a digital version here.

Zach Kopin is a sophomore in American University’s College of Arts and Sciences University Honors Program double majoring in History and Music. He currently works as an intern under Dr. Michael J. Crawford for the Early History Section of the Naval History and Heritage Command.