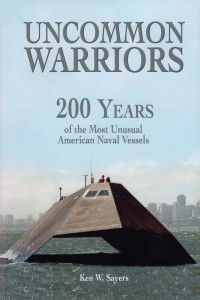 The United States Navy has a strong history of developing unique vessels to combat specific roles beyond the realm of traditional battleships and submarines. In the 2012 publication, Uncommon Warriors: 200 Years of the Most Unusual American Naval Vessels, author Ken W. Sayers describes in detail the range and military contribution of these unique vessels. Sayers’ background as former Navy officer, as well as former staff member of the assistant secretary of defense (public affairs), affords him the strategic position to examine and analyze unconventional naval vessels. Uncommon Warriors is indispensable as a reference guide to some of the most interesting naval vessels in American history. Both professionals and hobbyists will find this book captivating and useful. Sayers does an excellent job at uncovering the history behind these often overlooked, yet important, naval structures.

The Navy has historically re-fashioned existing vessels for specific new roles while also developing entirely new floating vessels. Referred to as auxiliary (AG) and miscellaneous (IX) vessels, they are the subject of this book. Sayers writes in his introduction, “Over the years, the AG and IX family has included among its varied members some very unique ships and boats, such as: The legendary ‘Old Ironsides,’ the oldest commissioned warship in the world still afloat—-Constitution (IX 21); A Civil War celebrity, Farragut’s flagship at the battle of Mobile Bay, and Norman Rockwell’s floating studio in 1918—-Hartford (IX 13); a super secret CIA ship that raised part of a Soviet ballistic missile submarine from the bottom of the Pacific Ocean—-Glomar Explorer (AG 193); The Navy’s oldest steel-hulled warship still existent, an iconic veteran of the Spanish American War, and an official National Historic Landmark—-Olympia (IX 40)….” (pp. xv-xvi)

Uncommon Warriors contains in-depth descriptions of historical significance of ships and boats that the author has identified, from a compilation of almost 500 AG/IX watercraft. Sayers writes, “Among the many roles they filled were: presidential yacht, aircraft carrier, historic relic, radio-controlled target towing, acoustic research, Trident missile testing, hydrographic and geological surveys, torpedo transport, floating armory for naval militias and reservists, Antarctic exploration, station tanker, school ship, ammunition disposal, flagship, explosives testing, ice breaking, prison ship…In sum, these vessels were a virtual navy within the Navy—-taken together, a fleet of more than 470 heterogeneous vessels that generally had one thing in common: at one time or another they had been classified officially as either an AG (general or miscellaneous auxiliary) or IX (unclassified miscellaneous) vessel.” (p. xiii)

The organization of this book is especially pleasing. Sayers adopts a logical method of walking the reader through the various chapters in natural progression. He begins with an overview on the origins and roles of these unique vessels. He then proceeds with an explanation of classifications and designations, followed by abbreviations and special terms so as to ensure that the reader has all the tools necessary to intellectually enjoy the read. Thirty-four chapters follow, which highlight various ships, their history and significance. These chapters are enhanced with 50 black-and-white photographs that enable the vessels to come to life. Additionally, a plethora of informational tables throughout the book help the reader truly understand the vessels’ specifications and duty. The book also includes a comprehensive directory of all AG and IX ships, which is interesting for its breadth and depth. A fine bibliography offers areas of additional research while the index of ship names provides a quick-glance reference guide.

Author Ken Sayers has successfully executed a remarkable research project in Uncommon Warriors: 200 Years of the Most Unusual American Naval Vessels. His writing style is professional yet inviting. I only wish, though, that the project would have demanded a larger budget so as to include greater, colorful photographs in a more substantial hardback format. Nonetheless, Uncommon Warriors is well researched and factually presented.

Jennifer Daley is a Ph.D. candidate, The Department of War Studies, King’s College, The University of London.