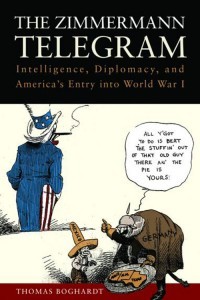 I thoroughly enjoyed this tale from the black world of cryptology. Espionage novels replete with the ‘shaken-not-stirred’ womanizers and drivers of fast cars, abound in fiction and non-fiction. Codebreakers have not received glorification in a similar genre of novels.  Probably the foremost impediment to ‘cipher thrillers’ is the tedious, attention-to-detail process of breaking codes that does not require fast women and faster cars as accessories.

We can blame David Kahn dampening the non-fiction market with his magnificent history, The Codebreakers, which for nearly fifty years has stood as the gold standard. The tortuous and lengthy declassification process can be discouraging to historians as well. But the story of the Zimmermann telegram has enough twists and turns to keep the attention of even a jaded James Bond. U.S. Army Center of Military History senior historian Thomas Boghardt is a thoughtful, technically astute, balanced investigator and fine author of prose.

Until Boghardt’s The Zimmermann Telegram, the foremost book available was Barbara Tuchman’s history by the same title. So you might ask why be so bold as to compete with the great historian, Tuchman? As Boghardt points out in his introduction, when first published in 1958, Tuchman’s book did not benefit from access to many relevant but still classified cryptology documents some of which were only declassified as late as 1983. She also made less use of German language materials than the current book.

In January of 1917 Arthur Zimmermann, the foreign secretary of Kaiser’s Germany sent a telegram to his embassy in Mexico City for prompt delivery to the host government. He informed the Mexicans that unrestricted submarine warfare would commence on February 1st, 1917.  Contingent on America then declaring war on Germany, Zimmermann proffered an alliance for the purpose of the Mexicans reacquiring the lost territories of Arizona, New Mexico, and, Texas upon a German victory over the allies. The Germans anticipated that Mexican incursions along the border would retard the entry of American troops (my grandfather being one) into the Western Front.

Interesting but even more implausible, Berlin had reserved California for the Japanese if the Mexicans could beguile their entry into the war on the side of the Germans.

Here is the rub. Immediately following the declaration of war in 1914, the Royal Navy severed the German underwater telegraphy cables. Henceforth the Germans relied mainly on the American and Swedish diplomatic transatlantic channels (conveniently surfacing in England) to transmit this very sensitive (“Most secret. Decipher yourself”) invitation to their embassy in Washington.  The telegram would travel from the embassy in Washington to Mexico City and thence to the Mexicans (who were not much interested in the offer).  We, naively believing that other people’s mail should be left unread, did not attempt to decode the hosted German traffic. And of course the Germans had promised the neutral America that all of their traffic was routine and administrative.

Alas somebody intercepted and was decoding German telegraphy (and American diplomatic traffic as well). British naval cryptographers in ‘Room 40’: the most colorful character (no shortage here) of the tale, Captain William Reginald ‘Blinker’ Hall, director of British naval intelligence, handed a deciphered copy of the German telegram to the U.S embassy in London. So you might be wondering how did he do that without revealing that he was also an avid reader of U.S. diplomatic traffic? Good question and one subject to intrigue, lies, and deception that extended nearly until World War II. And for the answer … read the Zimmermann Telegram. You won’t be disappointed.

Finally, if the history of cryptology is of interest, allow me to suggest a visit to the little known National Cryptologic Museum at Fort Meade, Maryland. The museum is open to the public and offers free tours guided by former cryptologists. The Zimmermann telegram occupies one of the more prominent displays.

Winn Price has been researching the first Navy secret code developed in 1887 by Cdr. Hubbard and four newly commissioned classmates from ’85, including Ens. Coontz. The code permitted the navy to use Western Union for communications with shore bases and deployed ships visiting ports.