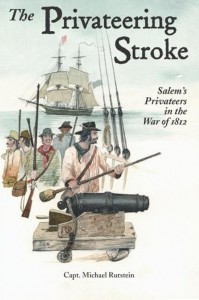 Despite its important role in American defense policy from the Revolution through the War of 1812, privateering has never been the subject of a comprehensive study.  This accounts, in part, for the fact that privateering, i.e., the system of licensing privately-owned vessels and individuals to capture enemy shipping, remains so poorly understood. Popular histories and the general public, more often than not, conflate privateering and its practitioners with piracy and/or commerce raiding by national navies. Historians of the War of 1812 have long understood that economic considerations, as much as military and naval defeats, led British leaders to seek peace in 1815. The 500 privateers licensed by the U.S. government contributed significantly to that pressure by capturing an average of 33 vessels per month worth a wartime total value of $40 million. These losses drove the price of British imports upward and pushed insurance rates to unprecedented levels.

A comprehensive history of privateering, even American privateering during the War of 1812, will require numerous more focused studies. Jerome R. Garitee The Republic’s Private Navy: the American Privateering Business as Practiced by Baltimore during the War of 1812. (1977)  thoroughly analyzes the operations and finances of the vessels operated under the 185 privateering commissions issued to Baltimore groups and individuals during the War of 1812. Michael Rutstein, the owner and captain of the two-masted schooner Fame, a “representation” of a Salem privateer, follows his lead in this study of the 43 privateers commissioned in Salem, Massachusetts, during the same era. These vessels ranged in size from small open boats that preyed upon shipping along the coasts of Maine to the three ships and one brig of over 250 tons that cruised as far as South America and the Irish Sea.  The majority (25) of the Salem privateers were schooner-rigged, fifteen of which displaced fewer a 50 tons.   After a brief overview of privateering in Salem, Rutstein summarizes extant information concerning each vessel, its owners and investors, and the operational career of each ship in one to twenty pages.

Rutstein divides these descriptions into five roughly chronological “books” which form the heart of the work: The first book describes the nine vessels of various kinds rushed into service as privateers at the outbreak of war; book two the six larger ships that took more time to prepare for service so did not put to sea until later in 1812; and book three the first ten purpose-built privateers. During the first year of war American courts ruled a ship caught “trading with the enemy, or under a British license [to be] a valid prize,” and book four traces the careers of the nine vessels that cruised in search of such capture.  This is an aspect of privateering virtually ignored by other studies.  The fifth and final book chronicles the activities of nine privateers during the last year of the war.

During the two-and-a-half years of war Salem privateers took 300 prizes—130 were taken into port condemned and sold, 78 were recaptured by the British, 39 were released, 35 destroyed, nine ransomed, and nine taken into port but returned to their owners. Rutstein calculates that a third of the privateering ventures were profitable, but notes that by war’s end 26 of the 43 vessels that engaged in privateering had been lost. Thus the entire enterprise was a gamble.

Perhaps of most value to the historian are the 25 pages of tables of information gleaned from both primary and secondary sources.  These include 1). Compilations of information about each vessel and its commission; 2). The name, date captured, captor, and value of the 24 ships taken by the British, and the date, location, and value of the two ships wrecked; and 3).  The name, date taken, captor, cargo, value, and disposition of each vessel captured.  A similar table listing owners, investors, and profits would be equally useful.

Though Rutstein falls short of the standards set by Garittee for analyzing the business aspects of privateering or its effects on the people or economy of Salem, he is to be applauded for the depth of his research in U.S. sources—there is only a single reference to a British or Canadian primary source—and for making much of it available to future researchers.

Dr. Bradford currently sits in the Class of 1957 History Chair at the U.S. Naval Academy.