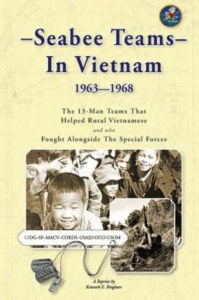 The subtitle of this book is “The 13-Man Teams That Helped Rural Vietnamese and who Fought Alongside the Special Forces.”  The introduction of the book under review proclaims that it consists of excerpts taken from the book “COMCPAC REPORTS, Special Edition, Seabee Teams Oct. 1959 – July 1969”, by Lt. Joseph L. Henley and Chief Journalist Thomas A. Johnson.  This COMCPAC report as written covered not only Seabee Teams that served in Vietnam but also in the Americas, Africa and Thailand. The editor of the book under review has chosen to use within his book only information concerning those teams that saw service in Vietnam.

During the time period of 1963 – 1968, sixteen Naval Mobile Construction Battalions deployed 83 Seabee Teams to Vietnam. The men of these teams undertook general civic development activities, built military bases, and became involved in a number of combat actions. As a result of these activities the men of these teams were awarded the full range of combat decorations, including one posthumous Congressional Medal of Honor.

The book under review is divided into three sections. The first section provides an excellent overview of the why and how the teams were created and deployed to Vietnam. The next section contains one to three page summaries of each team’s accomplishments while in Vietnam. The narrative is supported by a number of photographs that help to bring to life the text. The book closes with a chronological overview of significant events that the teams participated in plus a summarization and evaluation of the accomplishments of the teams while in Vietnam.

The first section of this book should be of interest to anyone wondering how an idea is conceived, formulated on paper, staffed, and then is approved. This is however only part of the battle as once approved the concept has to funded to cover training, equipment, and personnel before a concept can become a reality. The idea of Seabees engaging in counter insurgent operations was not met favorably by the CNO when first presented to him, but eventually the idea of forming Seabee Teams to provide training and technical assistance to friendly nations was accepted and became a reality. The teams consisted of one officer and twelve enlisted men who underwent 18 weeks of special training to prepare them to perform their tasks while living with an indigenous population.

The summarization of each teams tour within Vietnam, as presented in the book, is part press release and part historical documentation. This is said not to diminish the accomplishments of the teams, but to note that each teams account is written to serve two purposes, tell a positive story to the American public and preserve a historical account of what happen during the teams deployment.

This book should be of interest to anyone studying counter insurgent operations and nation building. We see here the Seabee using both his construction skills and his war fighting abilities to help others. The book provides positive reinforcement as to why the Navy needs construction workers who also have small arms fighting ability. Yes these teams were often deployed to areas from which they were able to provide direct support to the Navy, but these teams did make a very positive visual display of a caring U.S. Navy.  The team members also brought back into the Navy a better understanding of the problems the Navy would encounter as countries friendly to the United States were racked by turmoil growing out of social or nationalistic goals.

The editor is to be commended for taking a U.S. Navy report of limited distribution and re-publishing it so that more may gain insights on nation building from lessons learned during the Vietnam war.