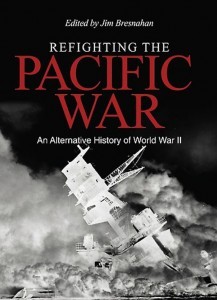 Counter factional histories have been popular with chimerical writers over many years. I can recall from high school days being fascinated with a book based on the author’s imagination of an early ending to the Civil War right after the Battle of Bull Run in 1861. According to him, a peace agreement was signed removing the objection of the Union to the Confederated States declaring their independence from the United States. The author described how the resurgent South later took over the northern portion of Mexico and soon annexed Cuba. He also described the abolition of slavery before the end of the Nineteenth Century followed by the forced repatriation of all southern Negroes to Africa.

Other authors have described a long rule of Alexander in Asia, the conquering of Rome by Hannibal, and a British victory in our Revolution – among many fanciful themes.

Now, Jim Bresnahan has added to the collection, but with a different approach. He reduces his scope from the great to the minor, focusing on the tactical engagements of World War II in the Pacific. He does not conceive of a Japanese victory, perhaps it is too far fetched for him; rather he examines a number of battles while proposing that different ways of fighting might have achieved US success with reduced loss of American lives or, at least, shortening the time required to win the war.

Overall, the utility of the book appears to be as a guide for the minutia of war making, something for studies at a military college or in a specialized course at a university. One cannot believe that it would have an appeal to a general audience. Leaving aside those qualifications, the question remains as to how well Bresnahan carries out his limited purpose.

Bresnahan calls himself the editor of this volume, not the author. He has selected a group of people interested in the Pacific War to provide their thoughts in short essays on various military actions. He does not present opposing views; thus, they do not debate on his pages, rather they present just their own opinions. Since they, at this late date, have had an opportunity to review the detailed reports of US participants and those of Japanese survivors, they can look down from above, as it were, on what went on. They have had ample time to consider the actions taken in the heat of fighting by commanders who did not know of the plans of the enemy, nor even in most cases, of the location and disposition of the opposing forces. More importantly, the contributors to Bresnahan’s book were not worn out from months at sea on ships buffeted by wind and waves while suffering from lack of sleep.

The book brings to mind the discussions that take place at many local taverns on Monday nights following Sunday’s football games. What play should the coach of the local team have called on fourth down with a yard to go when time was running short and his team was down by four points? Now, a day later, we are aware that he called for a quarterback plunge. We also know that it was stopped short. With cognizance of the result, some can state with confidence that he really should have called for a pass or, alternatively, a trick play around the end, or a punt.

Are those reviews worthwhile? Yes, if they make an evening pass more pleasantly. No, if they have as their purpose the education of coaches. Would anyone benefit if the arguments had been recorded and published? I doubt it.

I feel in similar fashion regarding “Pacific War.” Jim Bresnahan may have enjoyed compiling the book, but it serves a very limited useful purpose.

RADM Keats is a veteran of several campaigns in the Pacific during World War II.