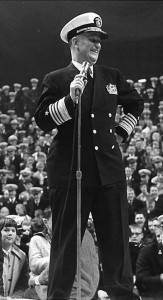 (Editor’s note: This is the fifth in a series of blogs by Norman Polmar, author, analyst, and consultant specializing in the naval, aviation, and intelligence fields. Follow the full series here.)

Admiral Arleigh A. Burke was a top destroyer commander and then chief of staff for the Fast Carrier Force during World War II. After the war a succession of important posts led to his appointment as Chief of Naval Operations; he served an unprecedented six years as CNO, from August 1955 to August 1961. In retirement, on the evening of 8 March 1966, Burke spoke at the Naval Academy to a small group composed of Academy officials, midshipmen, the staff of the U.S. Naval Institute, and a few USNI members in the area.

The evening was sponsored by the Naval Institute as part of its distinguished visitor program. Professor Robert M. (Bob) Langdon* of the Naval Academy’s history department directed the program for the USNI.

That evening a few persons from each category were invited to have coffee with Admiral Burke and his wife. I was among those invited. At the time I was assistant editor of the Naval Institute Proceedings and Bob wrote the column “professional reading,” which I edited for the magazine; we had become good friends while I was at the Naval Institute. When he introduced me to the Admiral, Bob mentioned that I was writing a history of aircraft carriers.

A few weeks later I wrote to the Admiral asking several questions related to my forthcoming  book  Aircraft Carriers: A History of Carrier Aviation and Its Influence on World Events (1969). He answered—with a touch of humor—and said that he would be happy to discuss the points further. Thus, we corresponded and met a couple of times. Afterward, when we saw each other at ceremonies or affairs he always remembered me and had a few kind words to say.

When, with Tom Allen, I began writing the biography of Admiral H.G. Rickover, “father of the atomic submarine,” I wrote to Admiral Burke asking for his assistance. His “Dear Norman” response was polite and to the point: He would not comment on a serving naval officer.

A short time later, my wife, Beverly, and I were invited to a brunch at the Navy museum in the Washington Navy Yard for the opening of a new exhibit. We were slightly late. When we arrived most of the guests were seated and the museum director, Captain Roger Pineau, was making his comments about the exhibit. There were four or five tables of eight persons, and I noticed Admiral and Mrs. Burke among those present. When we went through the buffet line I nodded to the Admiral and he returned the greeting.

Later, going back to the buffet for seconds, I was joined by Admiral Burke (and others). Never being timid, I said something along the lines of, “Admiral, you have to help me with the Rickover biography.”

Looking me in the eye, he said one word: “Why?”

His response was surprising: “If I let you interview me I would tell you about the time the three rabbis came to see me about Rickover.” And he proceeded to tell me that story. I put my plate down, grabbed a handful of paper cocktail napkins from the table, and began scribbling on them. A fountain pen does not write easily on paper napkins.

He saw me taking notes but continued with the story of the three rabbis. Then he began another story. . . but stopped suddenly. After a few seconds I said, “Admiral, that’s exactly why I have to interview you.”

“Call me,” he replied. I called him a few days later, we met, and he was most helpful for the book, Rickover: Controversy and Genius. The “rabbi story” was about three Washington-area rabbis coming to see Burke during the controversy over Rickover’s promotion to vice admiral in 1958. The rabbis said that they had asked to see Burke because they wanted to insure that religion was not a part of the controversy… that Rickover was not considered  to be Jewish. (Rickover was born a Jew in Poland, then a  province of the Russian Empire. In 1931, shortly after Rickover married Ruth Masters, he left the religion, writing a letter to his parents about the decision.)

Admiral Burke provided major contributions to the book. The Rickover biography was published in early 1982. A short time later I attended the annual “red tie” luncheon of naval intelligence officers and contractors (me) at the officers club at Bolling Air Force base in southeast Washington. I arrived early and was in line to get a glass of (red) wine when someone grabbed me and said that the Director of Naval Intelligence was on the phone and wanted to speak to me. He told me that he would be late and, since I knew Admiral Burke, he asked if I would greet Burke when he arrived.

I did so, meeting the Admiral when his car arrived and escorting him up to the ballroom. I suggested that he sit in a comfortable chair while I got him a drink. He said that he would have a rum and coke and, after a moment’s hesitation, Burke said that he would prefer to stand in line with me. He did so, and a dozen people came over to greet him as we moved toward the bar. Once I had purchased our drinks, he turned to me and said, “I’m angry with you, Norman.”

Then—grinning—he explained: His eyes were failing and he was limited to 15 minutes of reading per day.  His wife, Bobby, had been reading parts of Rickover to him. But he wanted to look at the photos, then read the captions, and then began reading the text, eating up his allotted reading time for several days.

Admiral Burke was a remarkable naval officer, destroyer commander, proponent of nuclear propulsion, and CNO—and a man with a sincere interest in naval history.

*(Bob Langdon tragically was killed on 23 June 1967, in a commercial airplane crash near Bloomsburg, Pennsylvania.  I dedicated my book Aircraft Carriers “To my friend Beverly and to my mentor Robert Langdon.”)