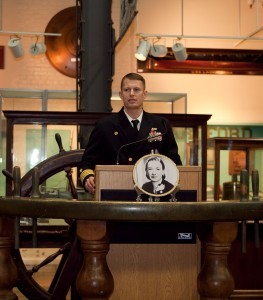 Responding to the Navy’s Women’s History Month theme of “Women Inspiring Innovation through Imagination: Celebrating Women in Science, Technology, Engineering and Mathematics,” the Naval Historical Foundation participated in Women’s History Month by co-hosting an event with the Hopper Information Services Center, Office of Naval Intelligence (ONI), at the National Museum of the U.S. Navy on March 1, 2013. The event, organized by ONI for the command’s staff and their families, honored the contributions of the late Rear Admiral Grace Murray Hopper, a pioneer in the field of computer programing, who aptly utilized her advanced knowledge of mathematics and technology to create one of the first computer programing languages.

Grace Harper joined the Naval Reserves in 1943 as a member of the WAVES (Women Accepted for Voluntary Emergency Service) with a strong interest in putting her Ph.D. in Mathematics from Yale University to work for her country, then in the middle of World War II. Lt. Hopper was one of more than 85,000 WAVES who worked in STEM fields, including air traffic controllers, cryptologists, drafters, meteorologists and translators. Commissioned as a lieutenant in 1944, she worked at the Bureau of Ordnance Computation Project at Harvard University. Nicknamed “Amazing Grace” by her colleagues, Dr. Harper retired as a Rear Admiral and is credited as the co-inventor of Common Business Oriented Language (COBOL), one of the first computer programming languages. She also is known for coining the word “bug” to describe computer malfunctions based on an actual moth that interfered with one of her computer projects. Following her death in 1992, USS Hopper (DDG 70) was commissioned as her namesake in 1997. The USS Hopper, an Arleigh Burke Class guided missile destroyer, was the second Navy warship to be named for a woman, and is still serving the Navy and defending our country today.

A strong supporter of women’s accomplishments and knowledge in STEM disciplines, the Naval History Foundation awarded its annual Captain Kenneth Coskey National History Day Prize in 2002, 2004 and 2009 to young historians who researched Dr. Hopper’s life and accomplishments. NHF supports STEM educational programs through its successful summer programs led by Foundation Education Coordinator Captain John Paulson, USN, (Ret.), a retired submariner and high-school physics teacher. Plans to export the Foundation’s STEM program to another Navy museum are in the works for this summer.