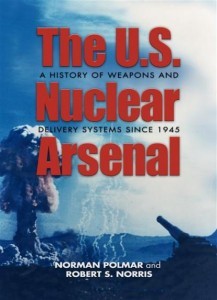 This is more than a well-written and researched reference book, but also an examination by experts of the evolution of nuclear weapons policy. When you absolutely need to know everything about how, why and where a US nuclear warhead and its delivery system was developed, this is the book you must have. You are spared the technical details, like nuclear physics, but you get a basic understanding of how the warhead reached the target, avoided countermeasures, and the expected damage. Some examples of these fascinating details follow.

The rapid development of nuclear weapons delivery technology is presented from its beginnings with the German World War II V-1 (Buzz Bomb) and V-2 rocket designs. The U.S. Army produced an operational German V-1 cruise missile a month after they were used to attack England in June 1944. The design was copied and put into production, but this stockpile was not needed after Japan surrendered. This allowed these “jet bombs” to be used as test platforms for the development of nuclear and conventionally armed cruise missiles including the submarine launched Regulus, the land-launched Snark and the Tomahawk.

The first Intercontinental Missile was the strategic cruise missile Snark (Snark is a Lewis Carroll fictional creature from the 1876 book, that survives in modern usage as “snarky”). The 10-year troubled, test program led to so many Snark crashes near Cape Canaveral, FL that these waters became known as “Snark infested.” The only operational Snark Wing was retired in June 1961 just one year  after the first missile went on alert.

Sometimes these programs went to the extreme, even bizarre. In 1955 the Secretary of Defense directed that Jupiter-S liquid fueled Intermediate Range Ballistic Missiles be designed for seaborne launch. The submarine version was proposed to carry three missiles in the middle section where the sail would help accommodate the 50 foot long missiles. The plan to fit these large, liquid-fueled missiles in a submarine that had to surface to launch them only seems bizarre (interesting drawing on page 184). This plan is exactly what the Soviets used in their GOLF and HOTEL class ballistic missile submarines (see Cold War Submarines by Norman Polmar and Kenneth Moore).

The Pluto Supersonic Low-Altitude Missile (SLAM) does achieve the bizarre status with its nuclear ramjet engine. This “unmanned bomber” was supposed to cruise at Mach 3 speeds at tree top levels over the Soviet Union while tossing out hydrogen bombs. The program was cancelled in 1964 after spending 320 million dollars because of radiation issues involving the nuclear-powered ramjet.

After commanding USS Guardfish (SSN 612) at the end of the Cold War Captain Bryant was a Deputy Commander of Submarine Squadron 11 before being assigned to the Political-Military Division of the Navy Staff.