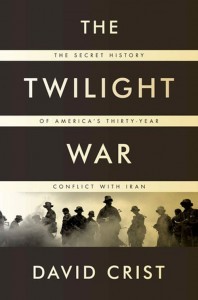 The Cold War by definition gave birth to several proxy wars. Concern over the Soviet Union’s potential impact on the oil producing Middle East led the U.S. to support Shah of Iran. Though secular, the Shah became extremely oppressive and thus was deposed by the Islamic Revolution. As the regime’s benefactor, the U.S. received the same scorn marked by the capture of the American embassy in Tehran and 52 of its occupants being held for 444 days.

Crist’s reporting on political intrigue and the roots of Iranian state-sponsored terrorism at the beginning of this conflict remain salient today. The Carter Administration balanced the need to keep Iran as a U.S. ally, or at least lukewarm toward the Soviet Union, against the risk of aligning with the Shah. Decision makers today undoubtedly struggle with some of the same decisions, albeit with different players.

The 1980’s are the most interesting period of this conflict. Crist notes that The Reagan Administration worked the problem from all angles, enduring the Iran-sponsored terrorist attack on the Marine Beirut Barracks, inserting the Navy into the Iran-Iraq War by protecting reflagged tankers, conducting special operations at sea, and negotiating arms for hostages in the ill-fated Iran Contra Affair.

For naval historians it is important to note that Twilight War thoroughly describes the major events of the “Tanker War” such as the Iraqi Exocet attack on USS Stark, the USS Samuel B. Roberts mine strike, and the USS Vincennes shoot-down of Iran Air flight 655. As a result, it should be required reading for anyone studying the period. Still, it should serve as a companion to other works such as No Higher Honor by Bradley Penniston and Inside the Danger Zone by Harold Lee Wise when studying the period in depth.

The war with Iran continued as the U.S. invaded Iraq. Twilight War may be one of the first sources to report on Iranian Quds Force operating in Iraq, assisting cells that attack Americans with explosively formed penetrators – the conflict’s most lethal IEDs. The U.S. responded by setting up a task force that captured Iranian Quds Force operators as high value targets.

Through its pages, Crist provides enough detail to ensure Twilight War is valuable to any scholar of history, yet his narrative is not too deep or detailed so that the book remains an enjoyable read to a casual fan of nonfiction. It is clear that Iran will remain a focal point of U.S. national security policy. Anyone who reads Twilight War will be witted to the source of conflict, and an understanding of America’s complicated foe.

Stephen Phillips is a retired naval reservist. His is the author of The Recipient’s Son, a novel about the U.S. Naval Academy in the 1990s published by the Naval Institute Press.