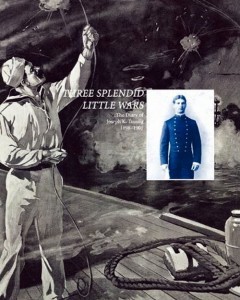 This fascinating volume offers an inside look at a young naval officer’s encounters with several of the signature moments of American military and diplomatic history between 1898 and 1901. Joseph K. Taussig (1877-1947) was at Annapolis when the Spanish-American war broke out in 1898. Serving aboard the flagship New York, Taussig witnessed the Battle of Santiago Bay in July 1898. He returned to Annapolis to complete that phase of his naval education, and then shipped out for two years as a naval cadet. Aboard the cruiser Newark, he made a classic voyage through the Caribbean, down South American coast, through the Straits of Magellan, and then northward to San Francisco. From there, the Newark took him to Hawaii, Guam, the Philippines, China, and Japan. Throughout his cruises, he maintained the journal now being reviewed.

Evelyn Cherpak, the volume’s editor, leaves Taussig’s prose as he wrote it and provides footnotes that identify virtually every person and vessel mentioned in the journal. The book also includes dozens of Taussig’s maps and diagrams, and contemporary photographs of some of the warships. All in all, the Naval War College Press has produced a handsome volume.

More important, the volume provides insights into the highs and lows, the excitement and the boredom, that characterized shipboard life. Taussig’s descriptions illustrate the mundane activities of planning and waiting and doing nothing, and how even being in charge of the ship’s launch could break the monotony. Yet there are also eerie moments. Taussig describes the Spanish wrecks in Santiago Bay, and particularly the damage caused by fire aboard the the Almirante Oquendo: paint falling off the ship, burned bodies, and a tin box with fused money. In the course of shoreside explorations, Taussig comes upon “half starved Cubans”-the civilian side of the story. There are also upbeat scenes, where the New York‘s band plays “The Girl I left behind me,” “patriotic airs,” and “A Hot Time in the Old Town Tonight.”

Part II provides Taussig’s journal during the Philippine Insurrection following the Spanish-American War, and the Boxer Rebellion in China. As John Hattendorf indicates in his foreword, the entries in this section are more sophisticated and extensive, perhaps a reflection of Taussig’s growth as an officer, and perhaps a reflection of the official purpose of the journal, a prerequisite for future promotion.

A number of scenes are particularly worth mentioning. En Route to Rio, the Newark crosses the Equator, and we are treated with a delightful account of The Court of Neptune. Later, we encounter a dramatic illustration of the challenges facing a navy without dependable sources of coal. After passing through the Straits of Magellan, Newark faced a shortage of coal, and the crew spent a week ashore chopping wood. When the freshly-cut wood would not burn, Captain Caspar Goodrich sent cutters to Ancud, Chile, to wire for coal. This episode and many others demonstrate the continuing challenge of coaling modern warships. From San Francisco, the Newark headed to Hawaii, and then Guam. At Guam, Newark‘s crew put on a minstrel show, a vivid reminder of race relations in the America at a time when the Naval Academy itself was segregated.

It was on this cruise that Taussig experienced two of the significant military/diplomatic events of the 20th century’s first years. First was the insurrection in the Philippines, an American territory as a result of the Spanish-American War. The uprising began in June 1899, and Taussig and the Newark arrived in Manila Bay in November. But Taussig’s journal provides few hints of the intense rebellion developing around him. Taussig notes in December 1899 that “the people learned that the Americanos were not so bad, as they supposed, so the natives . . . become real friendly. . . . On the whole I think we made a good impression.” (p. 110) As the Newark prepared to depart Pamplona on December 28, “the Filipinos . . . gave us three cheers, which were answered by our men.” (p. 112) Yet there were hints of the trouble ahead. Taussig reports on January 29, 1900, that the telegraph line to Manila had been cut, and on March 9 that “the Army had a slight skirmish.” (p. 120) In all, Taussig’s involvement with one of the more controversial insurgencies of American history was, at most, slight.

What Taussig found in China was quite different. In response to European encroachments on Chinese sovereignty, an anti-foreign movement, the Boxers, formed in 1898 and, with the support of the Empress Dowager, attacked foreigners in Beijing beginning in June 1900. An eight-nation alliance-Japan, Russia, Britain, France, Germany, Austria-Hungary, Italy, and the U.S.-responded, officially to defend their legations. The U.S. participated with two warships, 295 marines, and 3,124 army troops. Taussig and the Newark arrived just as events were intensifying. His journal reports various encounters with the Boxers and the experience of “joint operations” (although the term wasn’t used) with the forces of other nations. His narrative about the skirmishes with the Boxers in June 1900 tend to be lengthier than other sections of his journal. Some of his references to burning villages that harbored Boxers, and to participation by Chinese government forces, eerily presage the American experience in Vietnam two-thirds of a century later.

Taussig’s intense involvement with the Boxers lasted but a month. He was shot through the thigh and was transferred to a Yokohama hospital for several months of recuperation. By November 1900 he was well enough to be attending balls and garden parties in Japan. In December 1900 he was detached from the hospital and ordered, first, to USS Nashville, and then, in February 1901, to USS Culgoa, a “refrigerating vessel” carrying “frozen beef and mutton and ice” (p. 158). The journal ends with a note by Taussig that it “was submitted for review to the commanding officer of USS Culgoa,” who comments, “An Excellent Journal” (p. 165).

Taussig was to have a distinguished and at times controversial career, rising to the rank of flag officer (1932) and eventually to vice admiral on the retired list (1941). Taussig was also a “prolific writer” (p. xx), contributing 54 articles for the Proceedings of the U.S. Naval Institute, and publishing Our Navy: A Fighting Team (1943). In addition, his journal is of interest because of his family’s background. Taussig himself was born in Dresden of American parents who were German-Jewish in ancestry, and his father was Rear Admiral Edward D. Taussig. All in all, Three Splendid Little Wars is a rich addition to our understanding of the U.S. Navy at the turn of the 20th century.

Dr. Kenneth J. Blume is Professor of History in the Dept. of Humanities at the Albany College of Pharmacy and Health Sciences in Albany, New York.