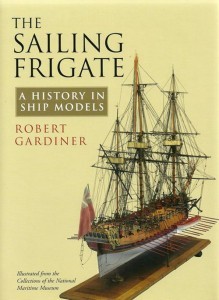 Gardiner takes a different approach in this book than in his earlier works. Rather than presenting plans, draughts and paintings, the development of the frigate is illustrated exclusively through photographs of models. Most photographs are in color, and the vast majority are taken from models built contemporaneously with the period illustrated.

The book traces the development of the frigate chronologically. The first chapters cover frigate predecessors, rather than true frigates. Gardiner uses these ships to trace the evolution of the cruising warship from the small two-deckers of the seventeenth century to the proto-frigates. (These ships called demi-batteries by the French, and built between 1689 and the 1740s, retained some guns in the lower gun deck.)

The final chapters describe the evolution of the true frigate, with its main guns on the upper gun deck, the lower gun deck used exclusively for habitation, and guns on the forecastle and quarterdeck. These chapters cover the period from the true frigate’s introduction in 1748 until the end of the sailing frigate in the 1850s.

Using contemporary models proves an excellent method of illustration changes in ship design and construction. Differences between the Sheerness model of 1660 and the Warrior of 1860 are obvious. The strength of Gardiner’s book is that it demonstrates the evolutionary process yielding those differences, and the effects of technological change on ship appearance over those two centuries.

Particularly useful are pages which illustrate comparative differences or show development of a particular feature of a frigate with a series of photos of different models. Two-page sidebars abound. Each focuses on different aspects of frigate development using annotated photos highlighting points of interest.

Some illustrate changes in rigging, hull structure, and construction techniques. Others illustrate distinguishing characteristics of frigates at different time periods. Several show the evolution of parts of the frigate (head, the stern, and waist, for example) with six to eight detail photos each captioned to explain the differences.

The book focuses on British frigate development. The few models of foreign-built frigates come from prizes, captured by the Royal Navy. This is understandable, given Gardiner’s focus on ships of the Royal Navy.  The publisher states The Sailing Frigate is the first in a series. Readers can hope a similar volume gets published for at least the frigates of the Marine nationale, and possibly those of the United States Navy.

For those interested in warships of the sailing era, The Sailing Frigate: A History in Ship Models is a book worth acquiring. It offers an outstanding introduction to the history of that era’s most storied sailing warship.