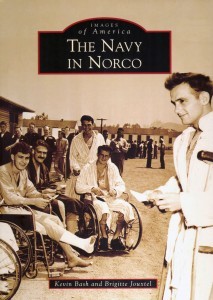 This book is part of the Images of America series. Norco, California, is located some 50 miles east of Long Beach. On 8 November 1941, the U.S. Navy began proceedings to purchase the bankrupt 700-acre Norconian Resort and converted it into United States Naval Hospital Number 1. During World War II, the hospital went through a number of name changes, in January 1942 to U.S. Naval Hospital Norco and in February 1942 to U.S. Navy Hospital Corona. The hospital was active, with decreasing bed capacity, until 1 November 1949 when it was closed. The hospital was reopened in February 1951 and then closed for good in 1957. Local efforts to have the hospital transferred to the Veterans Administration met with failure. During World War II, while the hospital handled war wounded, it served mainly as a contagious disease treatment center. The hospital had wards devoted solely to the treatment of tuberculosis, polio, and rheumatic fever.

In 1951, the National Bureau of Standards, Missile Development Division, took over a third of the hospital buildings for scientific research. In 1953, this organization was renamed Naval Ordnance Laboratory Corona and in 2011 is still in existence. The laboratory actively participated in supporting missile development based at Point Mugu.

Starting in the 1960s, various portions of the hospital grounds were declared surplus to the Navy’s  needs and transferred to the state of California and to the city of Norco. The state of California turned its portion of the holdings into a drug treatment center and prison. The division of the land among three different governmental units has led to various land use conflicts. At present, many of the state and city-owned structures are deteriorating due to this ongoing conflict.

The book has a nice two-page introduction which provides an overview history of Norco from 1920 to 2010. This, in turn, is followed by 118 pages of photos divided into eight chapters. With a few exceptions, each page contains two photos, with each photo having 50 to 100 word captions attached. The first three chapters recount the history of Norco before the Navy arrived, while the last five cover the Navy’s presence. Chapter Four’s 45 pages cover the history of the World War II hospital from the point of view of the staff and its patients. Chapter Five records the various celebrities that visited the hospital and is a Who’s Who of Hollywood. Chapter Six covers the relationship of the citizens of Norco with the hospital, bond drives, USO dances, and scrap drives. Chapter Seven covers the Navy’s scientific use of the hospital site by the National Bureau of Standards/Naval Ordnance Laboratory. The last chapter looks at the hospital site today and is very sad reading.

This book should be read by anyone interested in U.S. Navy medical history. One often forgets that diseases during World War II were still a great killer and incapacitator of sailors. Tuberculosis, which today we consider rare, forced the U S Navy during World War II to construct a 500 bed isolation ward at Norco. The pictures and text give an excellent view of the inter-relationship of one community with the U S Navy.