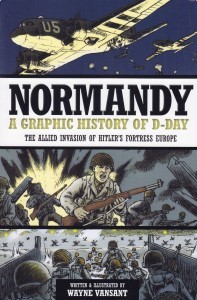 Scholars, writers, history buffs, movie producers and participants have minutely explored D-Day and the Normandy campaign. Thanks to thousands of books, articles and dramatic and documentary films, we are able to trace the activities and experiences of nearly all the troops, air and naval personnel involved in the invasion as well as their German adversaries, from initial planning to the assault itself to the campaign that unfolded after the invasion until the breakout nearly three months after June 6, 1944.

That makes Wayne Vansant’s hundred-page summary a bit unique. It is a graphic historical narrative, following the graphic novel format that gained currency in the late 1970s, with sequential illustrations and brief comments describing each art panel. Historians will deprecate the work as an adult comic book, and the description is accurate, but not completely fair. Vansant is indeed a comic book illustrator who served as the primary artist for Marvel Comics’ The ‘Nam series for five years. He is not, however, simply tossing off an expanded version of his earlier work. In fact, Normandy is the latest of several graphic military histories Vansant has completed, and more are in the works. Despite its brevity, the book clearly is well researched and organized.

Before writing this review, I decided to share the little volume with students in one of my college courses on military history. The reaction was favorable. The students were familiar with the graphic approach and had read and enjoyed graphic novels. This familiarity may create interest in Vansant’s work, a good thing since the brief summary it provides could lead young readers into much broader and more accomplished volumes on military history.

Obviously, the format is limited. Vansant encompasses the entire Normandy campaign in 103 pages. Each page contains three to six full-color illustration panels that look like the Sunday funnies, but the art is a step above simple comics. This means that much of the information in the narrative is conveyed visually. Many panels depict gory scenes, but the simple depictions are neither shockingly realistic nor disrespectfully cartoonish. The drawings reflect some care in selecting subjects that capture the eye and also convey thematic coherence. The real concern here is the captions that explain the meaning of the art and provide narrative continuity. Vansant does this with just 100 to 150 words per page, on average. That means he’s telling the Normandy story, including an introduction on the larger strategic context of the European Theater and planning for the invasion, airborne operations, amphibious landings, the German defense and subsequent stalemate on the Cotentin Peninsula through the breakout, in about 12,000 words, the length of a couple of scholarly articles. In addition, the book assumes that most of its readers know almost nothing about D-Day, so much of the narrative is explanatory as well as descriptive.

Vansant makes a credible effort to overcome these problems, but he must focus on an episodic approach that gives the book an overly anecdotal flavor. He illuminates general operational discussions with brief accounts of individual or small unit sacrifice or heroism. This technique is well-used, even cliché, but Vansant tries to repair the deficiency by avoiding many of the best-known stories and emphasizing less familiar events. To his credit, Vansant also pays a good deal of attention to British and Canadian forces, often ignored in many U.S. analyses that over-celebrate American D-Day achievements.

So, the overall effect is, for a knowledgeable reader, dissatisfying. There’s nothing new here for a serious student of the invasion. And, because he must gloss over so much, the inevitable mistakes stand out. For example, Vansant notes that more than 200,000 men set foot in Europe on D-Day, although the actual headcount was actually about 156,000 in 21st Army Group, with just over 83,000 British and Canadian troops in the British 2nd Army and about 73,000 GIs in the U.S. 1st Army, including more than 15,000 in the two airborne divisions who parachuted into the campaign. In addition, nearly 196,000 naval and merchant sailors manned more than 5,000 vessels in the Allied invasion fleet. By the end of July, about six weeks after D-Day, the Allies had landed more than 1.3 million men, held in check by fewer than 400,000 German troops until the advent of Operation Cobra on July 25, 1944, and the subsequent breakout and race through France.

Still, Vansant’s book may be a good alternative for young readers not ready for serious study of military history. It could have been more useful, however, with the addition of a select bibliography that leads its readers into more complex and complete studies.