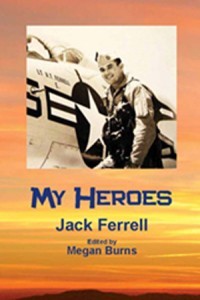 This is a nicely written account of one man’s life: service in the Navy as a regular and reserve officer, a pilot for United Airlines, and the golden years of retirement. Within the book, the author also takes time to discuss various family members and fellow aviators whom he considers heroes, thus the title of the book.

The author starts the book with his account of how he came to join the Navy at the start of the Korean War and the path he took to earn his Navy wings. He completed all his training just in time to deploy for the final months of combat in Korea. In April 1953, he sailed with VF-194, equipped with AD-4NA Skyraiders, for Korea on board USS Boxer (CV 21). His tales of three months of combat over Korea, as experienced by him and his squadron mates, are interesting and informative. He notes in closing that VF-194, during three months of combat, they lost sixteen of the twenty Skyraiders that were brought on board Boxer at the start of the cruise.

The author then relates his 1955 decision to get married and leave the Navy. At the end of his period of obligated service, he works for Douglas Aircraft as an engineer within an office building. He soon finds that he misses flying and thus applies to rejoin the Navy. Early in 1956 he returns to duty with the Navy and spends the next eight years flying various aircraft: A-4, A-1H, SNB, T-33, T-28, F9F-8T, and T-34. Due to receiving in 1963 a poor review from his commanding officer concerning his carrying out assigned duties, the author decides to leave the Navy for a job in the commercial airline industry.

His discussion of trying to obtain a flying job in commercial aviation is of interest. He finds that the transfer from flying a naval aircraft to flying a commercial aircraft was not as easy as just changing one’s uniform. He eventually is hired by United Airlines and then spends the next 25 years flying their aircraft. His account of his actions during the strike by the cockpit crews against United is interesting but far too brief. After twenty-five years of working for United, the author was forced to retire at the mandatory retirement age of sixty. During the period the author flew for United, he served first in the Air National Guard and then the Naval Reserves. In both services he flew various aircraft. He eventually retired from the Naval Reserves after being promoted to Commander, for at this rank, there were no pilot positions open for him and he was uninterested in a staff job.

His tale of his golden years of retirement center around flying his own private aircraft, finding the occasional paying job as pilot, family life, palling around with his buddies, and involvement with his community. Of interest within this section is his story of the efforts undertaken by Admiral Holloway and others to gain official recognition of then Lt.(jg) Howard Thayer’s actions on March 22, 1952, that led to the saving of the life of Ensign Ken Schechter’s life. In 2009, Lt. Cdr. Thayer finally received the Distinguished Flying Cross for his actions 57 years earlier.

The book is a straight forward account of the author’s life, with little attempt to place it within the larger frame of the institutional history happening around him. This book is a nice addition to personal accounts of naval flyers who served during the 1950s.