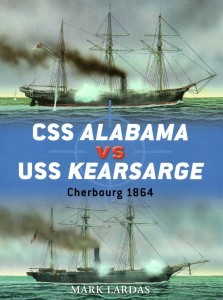 The author, Mark Lardas, brings a degree in naval architecture and marine engineering to his analysis of this epic American Civil War naval battle; as well as experience in writing as a military historian, and ship modeler. The book is enhanced with magnificent illustrations by ship modeler and war gamer Peter Dennis.

Lardas ably traces the evolution of warships from the War of 1812-1814 wooden hull sail ships, to the heterogeneous composites of wood, copper and iron hulled coal fired steam and screw (propeller) powered leviathans of 200-feet or more; armed with smooth bore and rifled (grooved) muzzle and breech loaded cannons. Some cannons were wheeled and at port and starboard hull gun port stations, others were more permanent pivot cannons at the ship midline; and stern and bow guns were positioned. The most formidable gun on Union warships was the Dahlgren cannon of various muzzle sizes, often 11 inches.

The imminent dangers of injury and death to nautical warriors were sinking vessels, burns and explosions from guns and steam machinery, and the flying splinters and daggers emanating from shattered wooden hulls under cannon and shellfire impact. Seamen and line officers had to learn gunnery. On some Union vessels, members of the United States Marine Corps, the maritime soldiers and police with U.S. Army ranks and rates, supplemented naval gun crews.

Especially interesting were the author’s biographical summaries of the nautical protagonists, Winslow and Semmes. The two naval officers served together in the United States-Mexico War (1846-1848). Lardas seemed to suggest that their reciprocal service and familiarity might have influenced Winslow’s actions or lack thereof in the final battle and response to the sinking of the Alabama and the fate of Semmes and his crew adrift at sea.

The reader will be mesmerized by the highlights of the June 1864 battle between Kearsarge and the Confederate commerce raider Alabama, six miles off the French port of Cherbourg in international waters.

Equally intriguing, the post-war careers of Winslow and Semmes, and the fate of USS Kearsarge.

Lardas writes like a novelist, and the maritime history and technology expert that he is. The book is a compelling and informative read.